Home » Around The Web » How Music Can Bring Back Great Memories

How Music Can Bring Back Great Memories 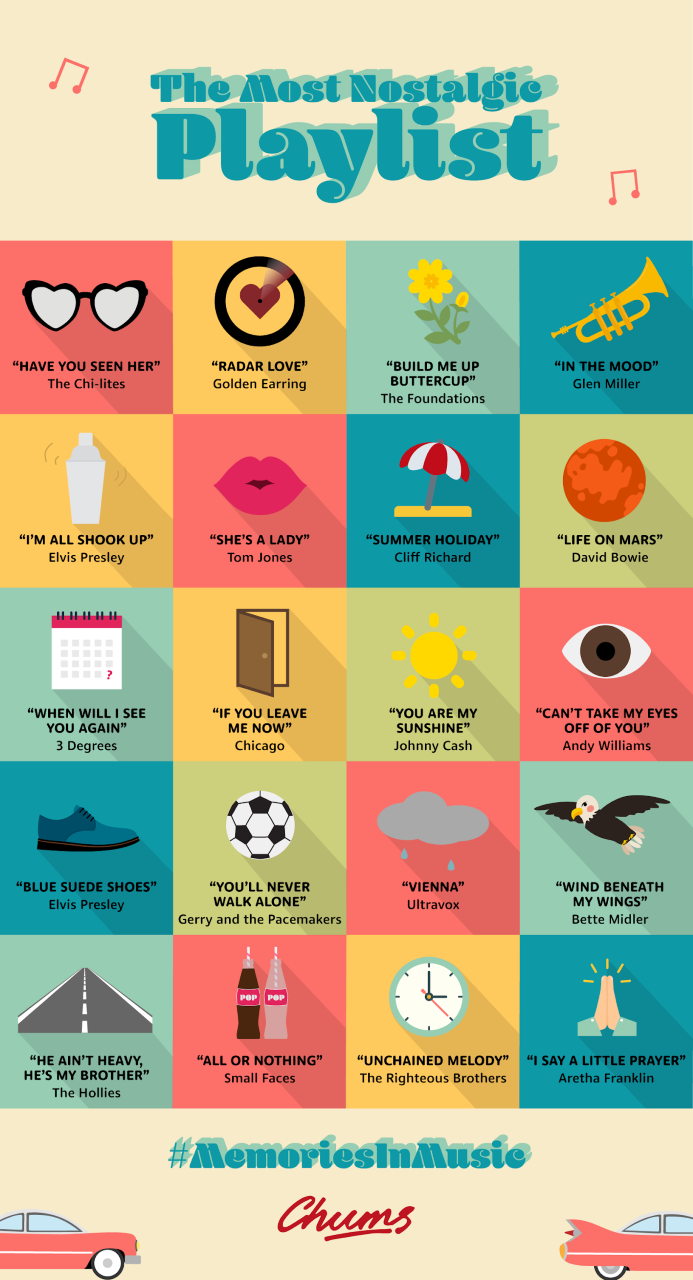 Getting older can bring with it a great deal of sadness, losing loved ones, loneliness, health issues, and the inability to get around as much as we used to. It can be a tough time for some.

However, the key to keeping happy and looking on the bright side of life is in stopping occasionally to reminisce, to look back on happy times ready for the next adventure or to help us through tough times ahead.

There are many ways to do this, such as looking through old photos, chatting with friends and family, revisiting favourite holiday destinations and listening to your favourite songs which bring back fond memories.

Everyone has their own soundtrack to their life, but for those who may need a little nudge with their trips down memory lane, Chums have recently created a campaign called memories in music, which features some of the most memorable songs as nominated by their customers.

Here’s a few of ours, we hope you enjoy!

Simon looks back to happy holidays in Bigbury On Sea Devon where his family would play UB40 on the journey to Devon in the family Austin Elegro. He remembers that the whole family would sing along, blue skies, summer beach days and sipping coke from the Pilchard Inn pub on Burgh Island.

Jenny remembers a trip to a record shop in Blackpool, which had an antique record player with a long stem stylus. This song was playing on a 33RPM record and as it was playing, you would see the stem dance across the turntable. The version of the song that she heard in the shop was the one where Rick [Wakeman] was playing the piano to it. Between the lyrics and the piano, Jenny found it so clever and hauntingly beautiful. If you are interested in learning to play yourself, check out Markson Pianos who have some great deals on getting started on the keyboard.

Vienna was one of the first songs Amanda’s grandad taught her to play on a synth at the age of eight. Amanda says: “When I was 17, I finally went to Vienna and shamefully ran down the Imperial stairs of the Palace singing ‘This means nothing to me, Oh Vienna’ “The Austrian onlookers (and tourists) were really impressed with my abilities. Every time I hear the song I miss my grandad but smile at my ability to embarrass myself time and time again.”

Patricia says: “I had two brothers and we lost one seven years ago. When we were arranging his funeral my brother and I wanted a song to be played. We both said to each other to pick one and said we would think about it. My brother rang me the next day we both said it together, He Ain’t Heavy He’s My Brother. It was so emotional for us and everyone in the church. Afterwards in the pub a minute’s silence was called for and the song was played again. Our brother was very popular and was loved by so many.”

This song reminds Lynn of her first crush who was moving abroad, and even now when she hears it she gets emotional, over 50 years later!

Unchained Melody was in the charts in the 50s, when Sheila’s husband, then boyfriend, was abroad on National Service and she missed him so much. At that time it was sung by Jimmy Young, but she now prefers the Righteous Brothers’ version. It still reminds her of that emotional time in their lives. This July, they will have been married 62 years.

Anita says this song reminds her of when she and her husband were writing to each other when they were courting, as he lived in London and she lived in Sheffield.

Thank you to everyone who submitted a song to be included in our most nostalgic playlist and for sharing your memories with us. We’ve enjoyed reading your comments and listening to your song recommendations. If you would like to listen to the playlist, check out the video at the very end of the post.