The one-day event saw over 1,500 people descend on Birmingham’s Eastside district to attend the gathering of 40 local food and drink businesses. 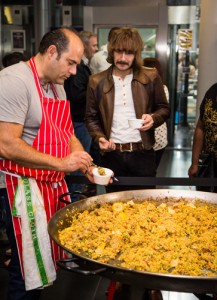 A pop-up restaurant by Don Diego Tapas saw the Sutton Coldfield Spanish eatery bring its paella and chorizo offerings into the heart of Birmingham, while independent hotel La Tour hosted a prosecco and canape lounge.

Outdoors, a collection of mobile traders paid homage to the city’s well-established street food scene, while chef demonstrations and workshops took place throughout the day.

The city’s global diversity of cuisine was well-represented, with visitors able to try Polish sausages, Malaysian curries, Bulgarian pastries and wine from India.

As the day wore on, the bar area filled with punters eager to sample and learn mixology from Langley’s, a locally-distilled gin. They also encountered Purity craft beer, as well as a range of cocktails and whisky from The Birmingham Whisky Club.

Richard Turner, chef patron of the Michelin-starred Turner’s in Harborne, was the fair’s ambassador. He commented:

“The fair really brought Birmingham’s independent food and drink vendors to the fore, and it proved that we are real heavyweights when it comes to top-class ingredients and great artisan produce.”

“The response to the food fair has been amazing, and so many people have said they didn’t realise Birmingham and the West Midlands had all this to offer. It’s both the quality and the variety of food and drink here that make the city special.”

Birmingham Independent Food Fair was organised by Dine Birmingham, and supported by Visit Birmingham. The festival followed a pilot event held in 2013 at Hotel La Tour.