Home » Around The Web » The NBA’s Greatest Moments 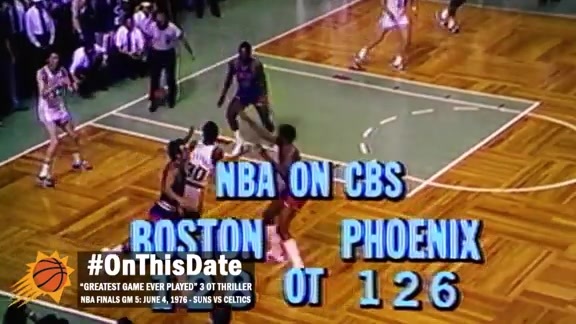 The NBA’s slogan ‘Where Amazing Happens’, couldn’t be more apt. Over the years this amazing league has provided viewers and fans with some of the most gut-wrenching, passion fuelled and simply amazing moments in sporting history. Since its creation the hardwood arenas up and down the land have provided endless entertainment and produced some stunning players that fans love to watch and bet on, but when you do make sure you check the bookies reviews. From last minute hoops to scintillating demolitions, the NBA has had it all. We are going to take a look at the NBA’s greatest moments and see what really makes this league so special.

On paper it doesn’t sound like the greatest ever match up, and it tends not to be really. But, in the NBA finals of 1976, this championship series was tied at 2-2 and the stakes for this game were high. After a hugely close series, it all came down to the final game which had absolutely everything in it. The game went to three overtimes, had an unacknowledged timeout and a buzzer beating hoop. In the second OT the Phoenix Suns managed to inbound following a Boston free throw to allow them to send it to an exhilarating 3rd OT. A certain Glenn McDonald finally stepped up to the plate scoring 6 points in the OT and helping the Boston Celtics win this momentous game 128-126. Wow.

Famously exclaimed by Johnny Most when commentating on the Eastern Conference final between the Detroit Pistons and Boston Celtics. Synonymous with Larry Bird’s name, this bit of commentary followed a vital interception by the big man who fed a pass to Dennis Johnson for a layup. This turned a narrow loss into a momentous victory for the Celtic and would go on to inspire the team on to win the rest of the series and championship. Commentary at its best.

The performance of the impressive and famous Magic Johnson in game six of the 1980s NBA Finals has been undeniably put down as one of the greatest individual performances ever. The pivotal Kareem Abdul-Jabbar had been injured for the Lakers. So instead of plugging the gap with a reserve, the team decided to take a punt on a rookie. This risk paid off as Magic Johnson would go on to win the game for the Lakers and put his name down in history. Scoring 45 points and helping with 6 assists, Magic Johnson did it all for the Lakers on that day and led them triumphantly to the NBA title.

A list of the NBA’s greatest moments would not be complete without some Michael Jordan’s action. Infact, this legend could almost certainly fill a list of great moments himself. But one moment really stands out in his career. There’s not much to add about this great man. He was basketball’s best ever. Gracing the court he should have a monumental talent that was head and shoulders above his peers. The Chicago Bulls of the 90s created a team that has never quite been rivalled. With 15 seconds left, Utah were beating the Bulls in the final of the 1998 NBA. But as Utah got turned over in possession, the one and only Michael Jordan travelled with the ball up to the Utah hoop and swished in a hoop to see Chicago go 1 point up on the leaderboard and Jordan made his final shot in a Bulls shirt. This game still holds the record for the most watched game in NBA history and would see Jordan bow out of his Bulls career in fine fashion. A moment like this involving a player like this is rare and the likes will probably never be seen again – it truly was special.