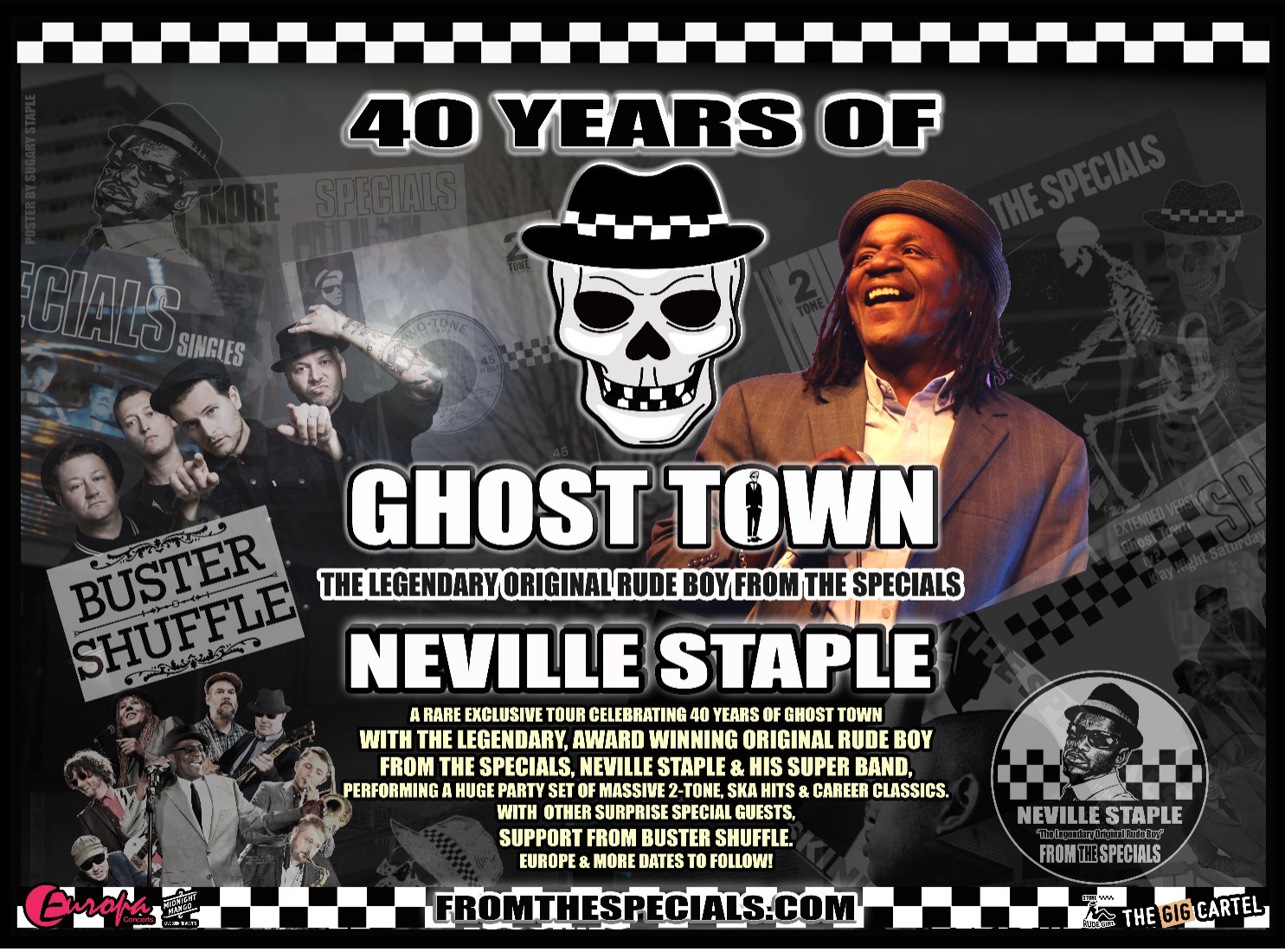 2-Tone music “Legend” Neville Staple, ‘From the Specials’, also known as the ‘Original Rude Boy’ celebrates the 40th Anniversary of Ghost Town, one of his most iconic lead vocal hit songs of the 1980’s, with an exclusive 2Tone celebration tour. Expect to party with nostalgic fashion, style, and fun, while singing along to hits and classics, like A Message To you Rudy, Gangsters, Too Much Too Young, and more, with unashamed passion. Joining the well-loved rude boy and his highly celebrated band, will be Buster Shuffle, the brilliant & fun, cockney ska punk and ‘knees up bar room stomping’ band, plus other surprise star guests along the way.

Dr Neville Staple (D.Mus), who has scores of music awards from decades of touring and song-writing, including an honorary Doctorate of Music in 2019, says he still gets excited and energised with touring. “I still love it. I feed off it. The whole band is so ready for this, and who would have thought, that when I recorded the lead on ‘Ghost Town’ all those years ago, it would still be so relevant today, with fans of all ages loving it. They singalong at the shows, kids learn about it and perform it at schools and during the lockdowns and restrictions, it was one of the most requested songs on radio. I have done a 40th Anniversary extended celebration version too, added to our brand-new ska album, ‘From the Specials & Beyond’, released during the tour. “I still love 2-Tone. It’s a way of life for me, so my band and I plan to turn all the shows into massive ska celebration parties. It’s what we do!”

Sugary Staple, performer wife and manager of Neville, agrees, “Fans have been begging for us to do a full road tour, so this is a perfect way to give them what they want. I always feel so honoured to sing and produce with Neville and the guys, but having the brilliant Buster Shuffle with us, makes this even more fun for the fans, for everyone. Fans will be a part of the nicest, most giving bunch of audience members ever, while getting an extensive ride through brilliant and unforgettable songs. Tickets will be scorching hot property. I can’t wait!”

Look out of for Neville Staple & Sugary in the brand-new BBC Documentary ‘2-Tone, The Sound of Coventry’, and for the brand new album ‘From the Specials & Beyond’ on Cleopatra Records.

“So much soul, so much energy, so much love from the audience”

Keep up with Neville Staple – From The Specials Band