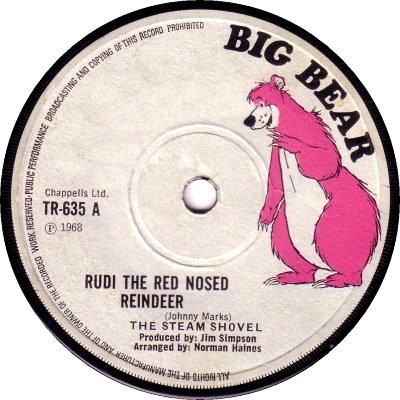 The story of Rudi The Red-Nosed Reindeer began 53 years ago, in Birmingham with the first ska recording to hit in the UK.

The band were The Locomotive, a well-established touring band who started off playing Kansas City style rhythm & blues in the early 60s but underwent a dramatic change of style when they stumbled across Rock Steady in a local record store that specialised in Jamaican imports.

Picking up on the then-current Rudi theme, where a series of Jamaican bands recorded songs about this mythical gangster figure, gun-shootin’ and retributin’, Locomotive recorded “Rudi’s In Love” wherein Rudi became a nice guy, fell in love and got married.

It worked and the 45rpm Parlophone made #25 on the UK singles chart. Thinking to continue in the same Rock Steady/Ska vein, manager Jim Simpson produced a follow-up entitled “Rudi The Red-Nosed Reindeer”, only to have it turned down by EMI Parlophone who, in their wisdom, released the heavier, doom-laden “Mr Armageddon”.

So there he was, a finished recording of “Rudi The Red-Nosed Reindeer” and the B-side a ska version of “White Christmas” in hand, Christmas fast-approaching, what was he to do? He took what appeared to him to be the logical step and set up his own record label, Big Bear Records, which now is probably the longest-established independent record label in the country.

Distribution was though Island Records, who allocated a Trojan catalogue number (TR 635) and it was released just in time for Christmas 1968. It sold enough to pretty much recoup the recording costs, but there was to be a sting in that reindeer’s tail.

Not to worry, said those design chaps, it’s a different colour and its hairs are different, so no problem. Walt Disney, however, felt otherwise and quickly despatched his legal chaps to have a stiff word with Simpson who swiftly agreed to do as they asked, to cease and desist.

The single was later to see the light of day on two occasions, re-released in November 1994 and December 1979 on Big Bear Records, with a new Disney-proof logo, with catalogue number BB25 and credited to The Gangsters, and here we go, all those years later, with a digital release and hope that, in these troubled times, folk out there are ready for some silliness and fun.