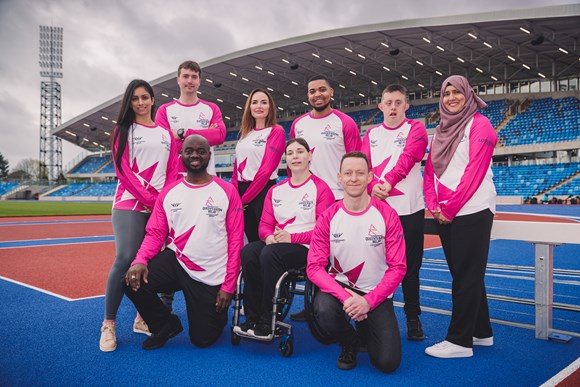 The Birmingham 2022 Commonwealth Games has confirmed the inspirational people from communities across the West Midlands who will take on the role of Batonbearer in the Queen’s Baton Relay this summer.

The Queen’s Baton will return home to the West Midlands on 18 – 28 July, in the final ten-day countdown to Birmingham 2022. The successful Batonbearers have been specially selected to represent the West Midlands and carry the Baton through local communities.

On its tour of Commonwealth nations and territories, the Queen’s Baton will arrive back in England on 2 June 2022 for a four-day visit to London, coinciding with The Queen’s Platinum Jubilee Central Weekend, before resuming the international journey. It later returns to England on 4 July to commence a 25-day tour across all remaining regions. The Relay will culminate at the Alexander Stadium on 28 July for the Opening Ceremony, where the Queen’s Message will be read aloud, signifying the official start of the Birmingham 2022 Commonwealth Games.

The confirmation of Batonbearers comes following the public nomination campaign in January 2022, from which approximately 8,000 nominations for were submitted. The callout was for inspirational people in England who met the selection criteria:

Batonbearers have been selected in all nine regions of England and embody the diversity in communities across the country. From local heroes to inspirational school children, the Batonbearers come from all walks of life, backgrounds and vary in age – with children as young as 12 taking part – and each take on issues that matter most to them.

Today, CJ Lloyd Webley, from the West Midlands joined other confirmed community Batonbearers at the Alexander Stadium, where the Relay will reach its finale following a month of celebrations across the country.

Each Batonbearer has been notified on which day and in which region they will carry the Baton, which will be on one of the following dates:

Further details of Queen’s Baton Relay route will be revealed in May 2022.

Batonbearers will play an integral role in the Queen’s Baton Relay when it returns to England this summer, taking on the once-in-a-lifetime opportunity to carry the Queen’s Baton in their region and building excitement for the highly-anticipated Commonwealth Games. They will join over 7,500 Batonbearers that have already passed the Baton between communities on the international journey.

As Official Partner of the Queen’s Baton Relay, watchmaking company Longines is working with Birmingham-based charity Sport4Life and has nominated individuals from across the organisation to carry the Baton. Just one of the selected Batonbearers from the charity is Tom Clarke-Forrest, the founder and CEO of Sport4Life.

The charity uses sport as a vehicle to achieve sustained education, training and employment outcomes for young people. Tom provided leadership and direction for the charity since its inception in 2006 and, over 15 years, has grown into the leading sport-for-employability charity across the West Midlands, employing 24 full-time staff and meaningfully supporting over 1,500 young people, towards better futures, each year.

Sport4Life also has an Employability Programme for Young People, recognised by United By Birmingham 2022, which helps young people in Birmingham who are disadvantaged, at risk of being unemployed or who are NEET (not in education, employment or training). The charity is also an Assignment Provider for the Birmingham 2022 Gen22 programme.

As a tradition of the Commonwealth Games, the Queen’s Baton Relay builds anticipation for the Games ahead by celebrating, connecting, and exciting communities across the Commonwealth and highlighting untold stories and unsung local heroes from the places it visits. Since October, the Baton has been travelling across the entire Commonwealth, with visits to Europe, Africa, Asia, Oceania, the Caribbean and the Americas, where over 7,500 Batonbearers have passed the Baton between communities.

Batonbearers for the Queen’s Baton Relay journey through Scotland, Northern Ireland and Wales will be chosen based on criteria set by the Commonwealth Games Associations in the respective country.

Lisa Hampton, Head of the Queen’s Baton Relay, said: “The Queen’s Baton Relay aims to excite and celebrate communities not only around the Commonwealth, but here in the host country of England. This journey would be nothing without the community of Batonbearers that bring the Relay to life. We’ve seen it internationally, and we can’t wait to see it in England.

“Our journey through England is an important one. Not only is it the finale to an epic international journey spanning eight months, but it’s an opportunity to engage with and celebrate individuals who work hard to ensure their community is a special place. We want to showcase these awe-inspiring stories; celebrating the diversity of England’s communities and the people working hard to make a difference.”

Commonwealth Games Federation President Dame Louise Martin DBE said: “I would like to congratulate all the inspirational individuals who have been selected to carry the Queen’s Baton Relay across the Host Country.

“The last leg of the Baton’s long journey across the 72 nations and territories of the Commonwealth will be such a special moment for everyone involved with the Games. It will provide a final opportunity for the whole country to engage with Birmingham 2022 ahead of the Opening Ceremony on 28 July, where the Queen’s Message will be read aloud and the Commonwealth Games will begin.”

“The relay has connected 72 nations and territories and serves as a symbol of the values of peace and friendship that the Commonwealth Sport family has always upheld.”

CJ Lloyd Webley, Batonbearer case study said: “I am so honoured to have been chosen as a Batonbearer for the West Midlands. Being able to carry the Baton in my home area is so special, the anticipation is really ramping up for the Queen’s Baton Relay and Birmingham 2022, I’m thrilled I get to play a part in it”

The Baton is currently visiting the Cayman Islands, which is the Baton’s 50th destination out of 72. In the last 30 days, the Baton has visited Australia, Belize, Guyana, Grenada, The Bahamas and Turks & Caicos.

For more information on the Queen’s Baton Relay, visit www.birmingham2022.com/qbr.