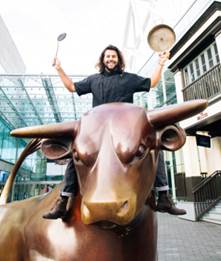 Spanish TV Chef Omar Allibhoy is bringing a taste of summer to Tapas Revolution at Grand Central this July with the addition of five new authentic Spanish dishes to his award-winning menu.

Recently named Birmingham’s Best Spanish Restaurant at the Birmingham Food, Drink & Hospitality Awards 2016, Omar’s menu has evolved to bring the very best of Spanish food to the people of the UK, from traditional tapas to modern cusine.