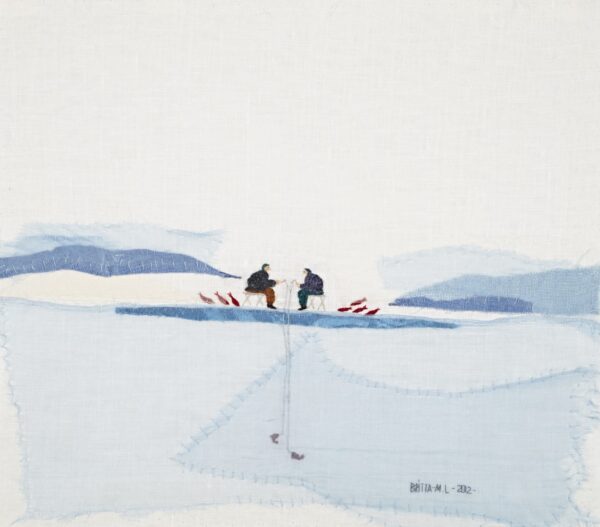 Under the Vast Sky features embroidered pieces by Marakatt-Labba for which she is best known, including panoramas chronicling the history, culture and cosmology of the Sámi, the Indigenous population of the northernmost parts of Scandinavia. These are combined with other art forms to demonstrate the wide range of her practice. Her work overall strikes a balance between the vernacular, the domestic, the intimacy of
daily life, and urgent issues of our time such as climate change and terrorism.

Britta Marakatt-Labba is above all a storyteller. For over four decades she has produced work centred on “an enduring and unending articulation, endorsement and dissemination of Sámi culture – past, present, and future, vernacular, spiritual, material. The ability to affirm, pronounce, tell, share and advocate this heritage and its ongoing transformations, and still acknowledge the colonial wounds and confront centuries of oppression.” Jan-Erik Lundström, curator, Under the Vast Sky.

Ikon’s exhibition includes key works such as Garjját/The Crows (1981 and 2021), where Marakatt-Labba’s stitches bring forth a compelling allegory referencing the protests of the late 1970s against hydropower expansion, in which the artist herself was involved. The crow has long been a symbol of authority to the Sámi, a creature that grabs everything it can, and in Garjját the birds fly across the protesters in Alta (Northern Norway), but on landing they are transformed into police officers. Last year she replicated the work in its entirety, with one new addition – a Sámi flag in the hands of
one of the protesters.

In Under the Vast Sky, sweeping panoramic works such as Čullon meahcci/Felled Forest (2020-21) articulate environmental concerns whilst embroideries such as Máilmmiávus/Cosmos (1999-2000) consider Sámi mythology and cosmology. Others focus on intimate and individual moments of daily life. In Gávnnadeapmi I/The Encounter I (2012) we see two figures sitting close together, fishing in an entirely white and blue
environment with their catch nearby. Gávnnadeapmi II/The Encounter II (2012) depicts another pair playfully teasing their dogs. Marakatt-Labba’s visual vocabulary incorporates the natural landscape, the seasonal cycles, the movements of the reindeer and symbolic items like the ládjogahpir – the Sámi women’s curved hat – to skilfully and evocatively portray the Sámi way of life.

The exhibition also includes a video with sound and sketches for Historja/History (2003), Britta Marakatt-Labba’s epic tableau narrating the history, the spiritual world, the land, landscape, and everyday life of the Sámi people. Another major work, Dáhpáhusat áiggis/Events in Time (2013) is concerned with more recent history. An installation, it includes a number of flour sacks – introduced to the Sámi communities by the Nazi occupation – used as canvases to convey a stark and stylised vision of the 2011 Utøya terror attack. The artist’s forays into other media also include small
sculptures which give three-dimensional form to figures from embroideries, and the inclusion of sound – especially the yoik, a traditional way of singing – in several recent works.