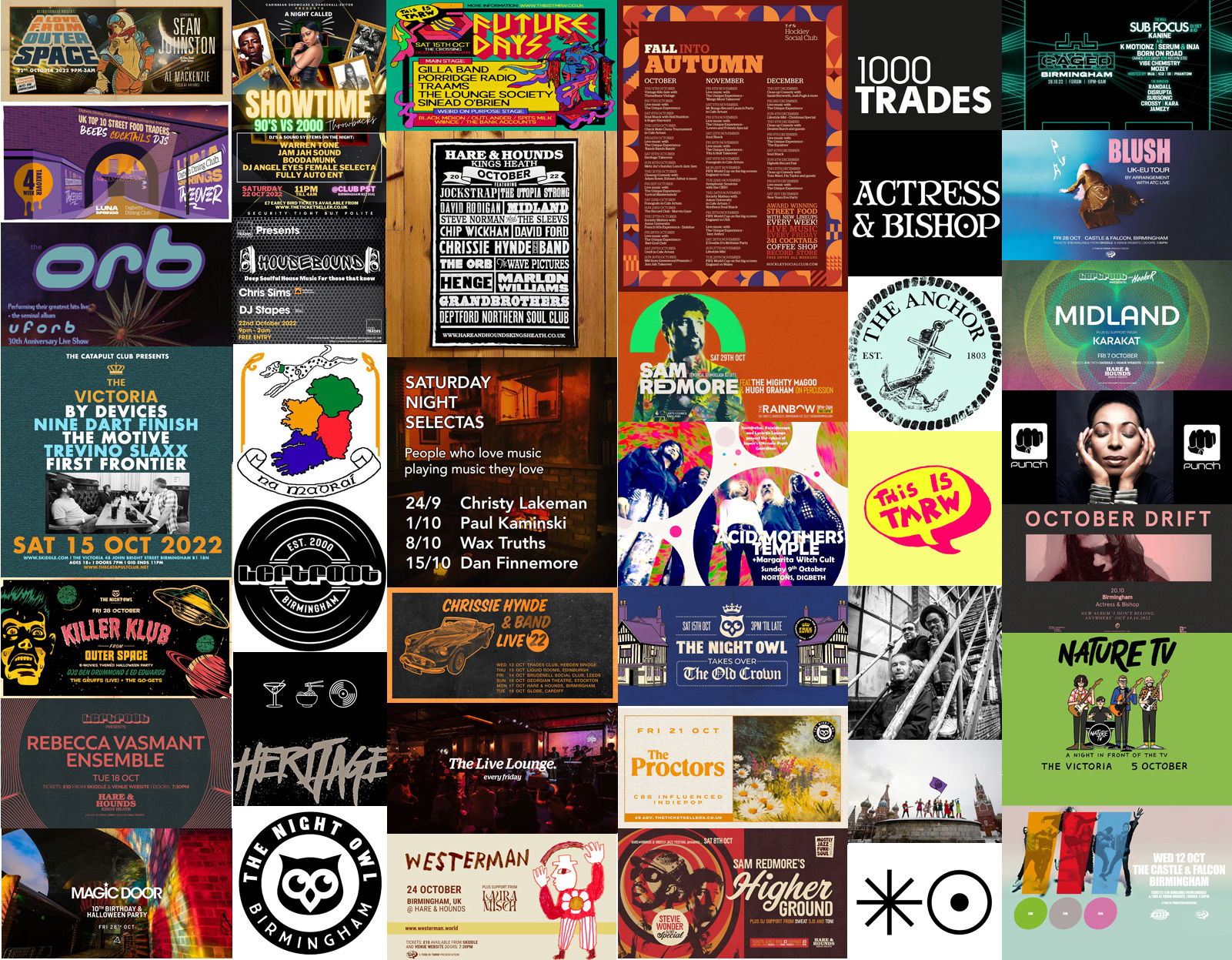 Here’s our take on the coolest original live music and DJ nights in Birmingham this October 2022.

An English indie pop band from the West Midlands region, the Proctors’ melodious 12-string jangle and winsome boy/girl harmonies won them a cult following during their original 1990s heyday as a part of the Sunday Records roster.

The Live Lounge: Every Friday Night.

From the team behind Digbeth Dining Club, Hockley Social Club is Birmingham’s premier street food venue, bar and events space! Thanks to local legend Call Me Unique and her own brand The Unique Experience, the venue will play host to live music every single Friday night. New themes, new artist from around the UK and a huge variety of genres on every single week – no Friday will ever be the same! All of this will go alongside the usual offering of amazing food from four kitchens and cocktails, beers, organic wines and slushies across three bars.

For four weeks only, the multi-award winning events operators, who started up on Lower Trinity Street in 2012, are back where it all began as they transform Luna Springs into their very own pop-up-DDC. They will be at the huge arena, right in the middle of Digbeth, on:

A special 10hr party with with lots of DJs who have played over the last 10 years, spread over 4 rooms. Expect Crafty Girls, G.o.D, The Devil, a truck load glitter and of course, a real Magic Door! Its also our favourite party of the year, Halloween! All will have a spooky twist so come fully spookied up too!

With the Julian Siegel Quartet, the BBC Jazz Award winning saxophonist and composer Julian Siegel can be heard alongside some of this generation’s most distinctive voices, creating an in-demand Quartet on the UK and European Jazz scene.

Out of jail and away from her house arrest for the support of Russian opposition leader Alexey Navalny, Maria Alyokhina and her infamous Russian feminist protest art collective PUSSY RIOT are coming back in the UK this October and November to perform Riot Days Live.

This Black History Month Punch Records presents none other than the ‘Queen of Lovers Rock’ herself, the multi award winning Carroll Thompson for a night to be remembered that no Lovers Rock fan should miss. Carroll Thompson’s credentials speak for themselves, her million-selling self-penned debut album HOPELESSLY IN LOVE stayed in the UK reggae charts for a record-breaking two and a half years, her music has featured in Oscar winning films and she is voted one of the 100 most influential Black Britons.

The Ruin Bar and Kitchen

It’s 5 years since The Ruin opened the doors and they’re celebrating with a season of good music from friends who play stuff they like. 8-12 for the next few Saturdays, low lights, super chill. Come for a listen. Starting the 1st Oct. Expect house, breaks, beats, funk, soul, and disco.

There’s plenty more out there each week, with regular live music and DJs at The Actress & Bishop, The Night Owl, Hare & Hounds, Sunflower Lounge, Scruffy Murphys, Subside, Deadwax and Nortons. There’s live jazz and eclectic DJs every weekend at 1000 Trades. Spotted Dog (Jazz Hockley Social Club, Cafe Artum, Sun On The Hill, Snobs and Lab 11 have DJs each weekend. The Anchor has live acoustic music Sundays with The Ruin offering up DJs into winter.