Published by admin On August 24, 2016 Leave a response

After the success of our first collaborative party where we invited Australian Deep Disco Don and MCDE hit maker Harvey Sutherland to grace us with his Juno 60 Synthesised Masterclass, we decided we couldn’t just leave it there!

We now invite one of the most dynamic, future-thinking, soul based DJ/Producer duo’s in the electronic music scene for an end-of-summer, 3 hour, vinyl-only tear up at The Hare! 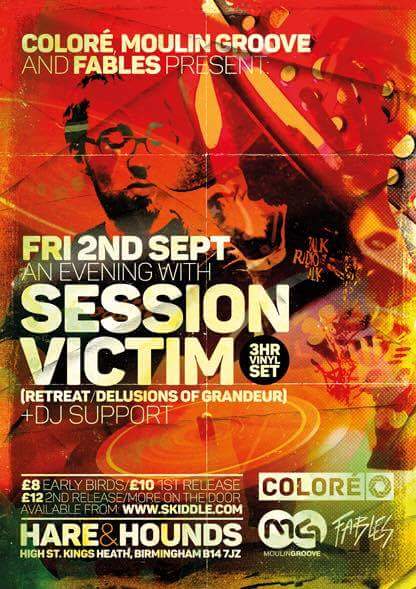 Since the success of their bedroom-produced debut LP, that took them a little by surprise back in 2012, Hauke Freer and Matthias Reiling have formalised their ad hoc studio jams and fanatical sampling sessions into something resembling a schedule, But besides that, refreshingly nothing much has changed about their friendship, spanning over twenty years and a regular Hamburg to Berlin studio exchange.

With a record collection covering several decades of hip hop, funk and soul as well as releases on numerous vinyl-only house and techno imprints, it’s their passion for uncovering dusty vinyl treasures and the soul that can be captured on a miniature moment in wax that inspires both their DJ sets and production environment. Session Victim will dig deep into the bowels of house & techno and fly high into the into the sounds of soul & disco. Expect a climatic journey of eclectic dance music that is distinctively and poignantly unique!

Session Victim’s ‘Good Intentions’ release back in 2012 was an underground hit and is still currently a staple track of many soulful underground sets! Their second long player ‘See You When You Get There’ was featured highly on various ‘Best of 2014′ lists, including XLR8R and DJ History. Respected contemporary and head of Pampa Records DJ Koze, also added his own seal of approval by remixing their track Hyuwee for the DJ Kicks 50th compilation while two of Session Victim’s latest album tracks also made it on to Seth Troxler’s DJ Kicks last year.

The next Session Victim releases will drop on Frank Musik and Delusions of Grandeur, followed by a remix of their friend Iron Curtis on Retreat (the vinyl only label Hauke runs with Quarion) and a remix of a classic 1996 Boris Dlugosch track on Peppermint Jam.

Stick Together (Delusions Of Grandeur) – https://soundcloud.com/delusionsofgrandeur/stick-together