Home » What's on » Comedy Night for the UK Sepsis Trust

Published by admin On October 20, 2016 Leave a response 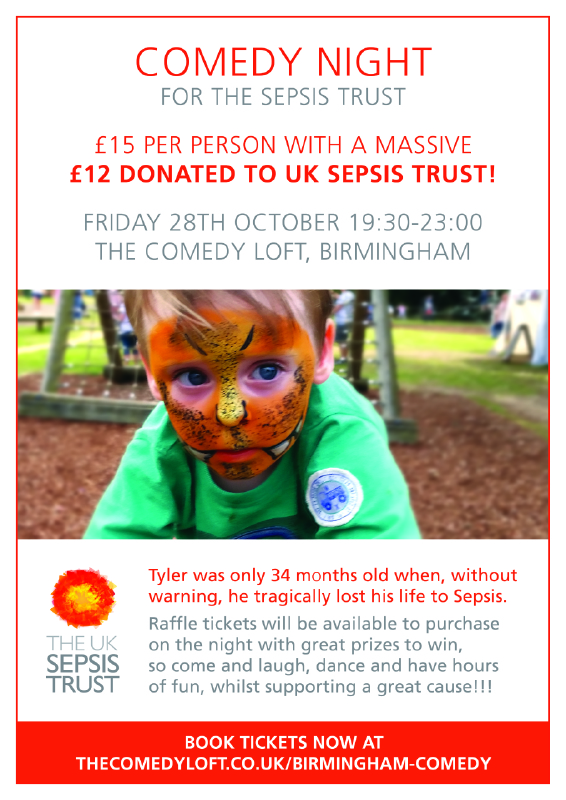 In a weeks time, the Comedy Loft will host a truly fabulous night of comedy to raise money and awareness for The UK Sepsis Trust. We have four top-class comedians showcasing Caimh McDonnell and “his chatty, playful stage presence”, Mike Newall with material that is “excellently timed, deceptively clever and very funny”, the mysterious Ivo Graham and Alistair Barrie with his “amusing anecdotes”- plus a raffle like no other raffle; with the chance to win complimentary tickets/vouchers to WASPS, go-karting, Warwick Racecourse, Go Ape, Cadbury World, Hatton Adventure World, Waterworld, Walkabout, Carliccios, Suds Cocktail Bar, Nandos, hampers of wine, chocolate, toys, a bouquet of flowers and MORE!

This really is a great cause, supporting a Birmingham based charity to save lives and support those affected by Sepsis. Sepsis, or blood poisoning, is the reaction to an infection in which the body attacks its own organs. If not identified and treated quickly, it can lead rapidly to organ failure and death, and leaves thousands of survivors with life-changing disabilities. The condition affects adults and children alike and strikes more than 13,100 people in the West Midlands alone every year, claiming 3,849 lives – and the condition is frequently under-diagnosed across the UK.

A group of school friends have organised the charity comedy night in memory of their friends’ son who passed away without warning from sepsis. Tyler; who was the cheekiest, happiest little boy, was only 34 months old when he lost his life.

Tickets are just £15, with £12 from every ticket sale going directly to The UK Sepsis Trust. The Comedy Loft have kindly wavered the booking fee on this show. Please join us if you can and share to help promote to your friends, colleagues and family!