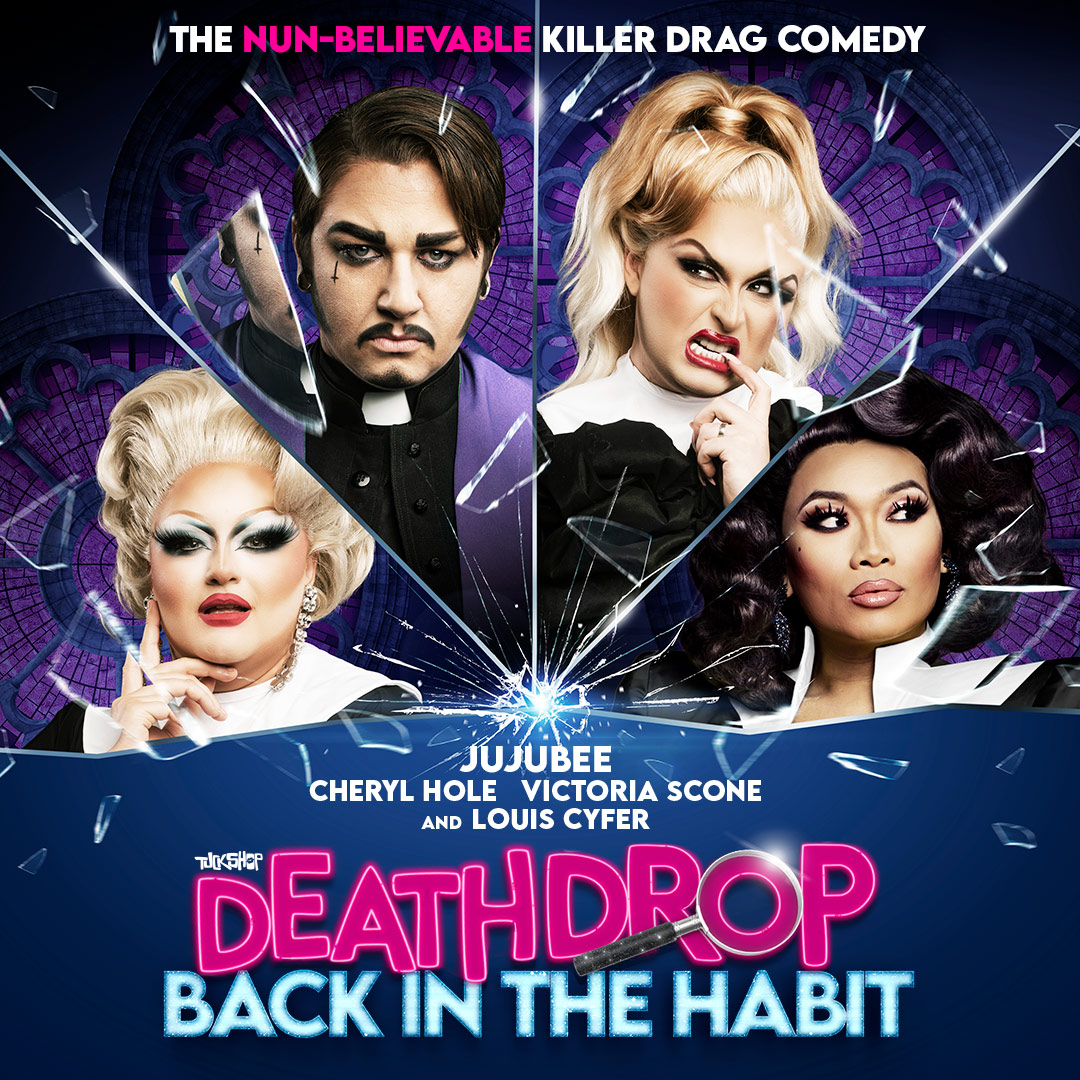 RuPaul’s Drag Race Superstar Jujubee will be joining the cast of Death Drop: Back in Habit UK tour, playing Sister Maria Julie Andrews at The Alexandra, Birmingham from 13 to 18 March 2023.

Jujubee will be joined by Drag Race UK stars Cheryl Hole, Victoria Scone and Drag King LoUis CYfer plus a full drag supporting cast. Jujubee previously starred in the original Death Drop show during the West End run in March 2021 at The Criterion.

Jujubee said: “I’m so excited to be returning to the Death Drop family in an entirely new play! I also can’t wait to go on tour and see more of Ireland and the UK. Get me on that stage now -it’s going to be fabulous!”

Death Drop Back in The Habit sees a gaggle of fabulous nuns confined to their Convent with a serial slayer slashing their way through the sisters. The laughs keep coming in this nun-missable new killer comedy – it’s the heavenly dose of fun we’ve all been longing to find.

As Drag Race UK recently returned to TV and continues to be BBC Three’s most popular non-scripted show, the popularity and fun of drag, combined with our nation’s love of a murder mystery remains inescapable. Lorraine Kelly, and drag superfan has announced she will host a one-off drag show Queens For The Night on primetime ITV later on this year. This show will have celebrity wannabe queens with their very own drag mentor, as they attempt to master being a drag queen. Alongside the release of new murder mystery film See How They Run, that remained top of the cinema box office throughout September 2022, the popularity of the art of drag and murder mysteries remain a firm public favourite.

Jujubee is best known for their appearances on the RuPaul’s Drag Race top 3 finalist on: World of Wonder’s RuPaul’s Drag Race Season 2, RuPaul’s Drag Race All Stars S1 & 5, and BBC’s RuPaul’s Drag Race UK vs The World, as well as appearing in the Netflix’s original AJ and the Queen and competing on Paramount Plus Queen of the Universe. They have two EPs Good Juju : Vol 1 ranked number seven on the iTunes Singer/Songwriter Album Chart and Good Juju : Vol 2 which peaked at number one. Juju rediscovered their love of live theatre with their critically acclaimed performance of ‘Summer Raines’ in Death Drop in London’s West End. Most recently, she starred in Cinderella at North Shore Music Theatre, released Queen of Hearts, a podcast whereas host she helps heart-torn strangers find love, and played The Tigress in the DRAG: The Musical at The Bourbon Room in Hollywood!

Trafalgar Theatre Productions, produces new shows and classic musicals in London and internationally including the Tony and Olivier award-winning smash hit musical, Jersey Boys, which opened London’s new Trafalgar Theatre in 2021 and is currently touring the UK & Ireland, Broadway’s favourite multi award-winning musical, Alanis Morrisette’s Jagged Little Pill which launched the Theatre Royal Sydney in September 2021, a major revival of the classic musical, Anything Goes, starring Sutton Foster and Robert Lindsay at the Barbican Theatre in the summer of 2021, the hilarious new comedy, Death Drop, at the Garrick Theatre and Criterion Theatre, the current World Tour of The Rocky Horror Show, the Lincoln Center’s award-winning production of The King and I at the London Palladium and worldwide, and a co-production of War Horse with The National Theatre in Australia and Asia-Pacific.

TuckShop are the UK’s leading drag production company. With sold out West End seasons of Cinderella, Death Drop, and TuckShop West End, they are shaping the future of the Drag industry, and shaking up the theatre community in the most FABULOUS way. With the huge rise in drag popularity over the last ten years, TuckShop are at the forefront of UK Drag culture, coming hot off the heels of founder Chris Clegg’s fifteen years’ experience in the West End as a producer, theatre manager, and marketing expert. As well as creating bespoke productions, producing nationwide tours, TuckShop also represent some of the UK’s best Drag talent, raising their profile through branding, promotion and regular bookings. With new productions in development, an ever-expanding roster of headline performers and the UK’s largest Drag merchandise store, TuckShop works tirelessly to give Drag the leg-up it deserves.