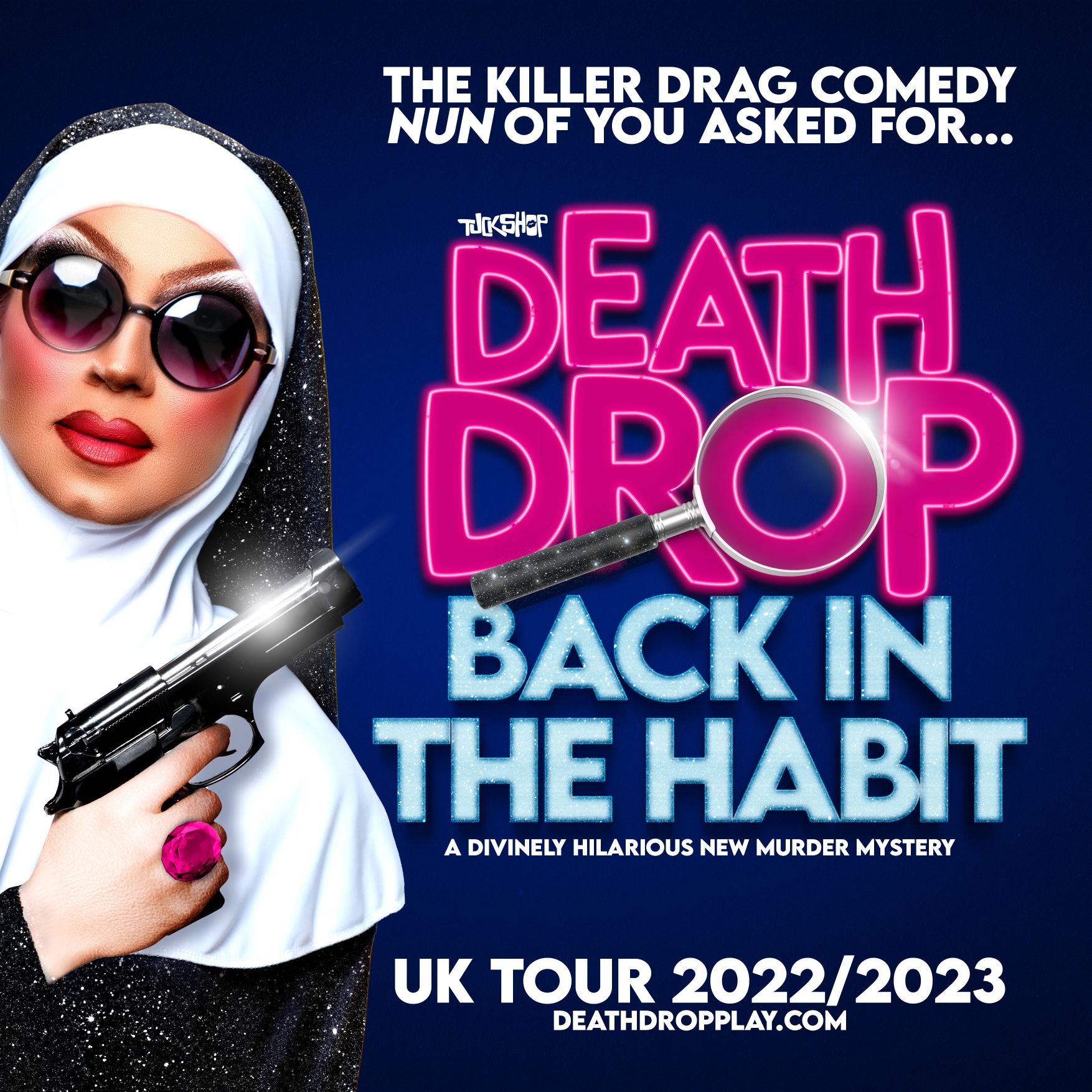 Following three sold-out West End runs and a smash hit UK tour, Death Drop is back! The drag murder mystery sensation is returning with a brand-new show: Death Drop: Back In The Habit. This laugh a minute show will feature some amazing casting: RuPaul Drag Race UK and Drag Race Vs The World star Cheryl Hole,together with Drag King LoUis CYfer and a full drag supporting cast.

Touring across the UK from this autumn, the new production – written by Rob Evans and directed once again by Jesse Jones – will arrive at The Alexandra, Birmingham from 13 to 18 March 2023.

From the producers who brought Courtney Act, Monet X Change, Willam, Jujubee and Latrice Royale to theatres across the country, Death Drop Back In The Habit promises to be another “killer show…that absolutely slays.” Drag King LoUis CYfer also starred in the original production when it opened in the West End in 2020 and 2021.

TuckShop Creative Director and Producer Christopher D. Clegg said: “We cannot wait to sashay onto the road again with the next chapter in the ridiculous Death Drop saga, this time with a gaggle of fabulous drag NUNS! Audiences are in for a real treat as this hilarious comedy puts a whole new spin on murder, religion and of course Drag. You will NOT want to miss this outrageous show.”

Cheryl Hole said: “I’m so beyond excited and honoured to be part of the new cast of Death Drop. After seeing so many of my talented friends in the different renditions of the show, I can’t wait to step into the shoes of my peers and show everyone that I’m far from mediocre.”

LoUis CYfer said: “It’s my absolute pleasure to rejoin the cast of Death Drop and once again be the Nasty Nick of the cast … there’s no better feeling than knowing that this year, I’ll have my pick of who I want to pull my Xmas cracker with ….”

RuPaul’s Drag Race UK returns for its fourth season on BBC Three which starts on Thursday 22 September, the show is hitting bigger viewing figures than ever before, as BBC Three has moved back to terrestrial TV. The popularity of the art of drag has entered the mainstream and with a new production of Death Drop, drag is here to stay for all audiences in both the drag and theatre world.

Death Drop Back In The Habit sees a gaggle of fabulous Nuns trapped in their Convent with a serial slayer slashing their way through the Sisters. As the clues are unearthed by Sis Marple, you’ll be laughing in the pews as the hilarious, fierce, all-drag killer comedy comes to its thrilling and uproarious conclusion.

Cheryl Hole, the self-proclaimed ‘Mediocre’ queen of Essex is anything but Mediocre.

Cheryl embodies heart, warmth and stupidity all with a huge grin on her face. After storming into the Top 4 on RuPaul’s Drag Race UK in 2019, Cheryl has been unstoppable as the hustling diva, performing up and down the country and entertaining globally on her social media platforms. Cheryl has accomplished big achievements in the last two years such as the face of Virgin Media’s Christmas campaign, A regular queen on the Netflix ‘I Like To Watch’ YouTube series and has two successful seasons of her hit podcast, Girl Group Gossip where Cheryl and her special co-host for the week discuss in depth iconic girl groups past and present. We saw Cheryl swapping walking in heels for wellington boots as she spent two weeks on a North Yorkshire farm and was the Runner-Up on MTV’s ‘Celebs on The Farm’ as well as other TV credits such as Celebrity Juice, Comedy Central’s ‘Your Face or Mine’ and BBC’s Strictly Frocked Up. Recently we saw Cheryl compete on the brand-new series of RuPaul’s Drag Race UK Verses The World which aired launching BBC Three coming back to TV. It is clear that nothing is going to stop our Cheryl and we cannot wait to see what the future holds for the true Queen of Essex.

Trafalgar Theatre Productions, produces new shows and classic musicals in London and internationally including the Tony and Olivier award-winning smash hit musical, Jersey Boys, which opened London’s new Trafalgar Theatre in 2021 and is currently touring the UK & Ireland, Broadway’s favourite multi award-winning musical, Alanis Morrisette’s Jagged Little Pill which launched the Theatre Royal Sydney in September 2021, a major revival of the classic musical, Anything Goes, starring Sutton Foster and Robert Lindsay at the Barbican Theatre in the summer of 2021, the hilarious new comedy, Death Drop, at the Garrick Theatre and Criterion Theatre, the current World Tour of The Rocky Horror Show, the Lincoln Centre’s award-winning production of The King and I at the London Palladium and worldwide, and a co-production of War Horse with The National Theatre in Australia and Asia-Pacific.

TuckShop are the UK’s leading drag production company. With sold out West End seasons of Cinderella, Death Drop, and TuckShop West End, they are shaping the future of the Drag industry, and shaking up the theatre community in the most FABULOUS way. With the huge rise in drag popularity over the last ten years, TuckShop are at the forefront of UK Drag culture, coming hot off the heels of founder Chris Clegg’s fifteen years’ experience in the West End as a producer, theatre manager, and marketing expert. As well as creating bespoke productions, producing nationwide tours, TuckShop also represent some of the UK’s best Drag talent, raising their profile through branding, promotion and regular bookings. With new productions in development, an ever-expanding roster of headline performers and the UK’s largest Drag merchandise store, TuckShop works tirelessly to give Drag the leg-up it deserves.