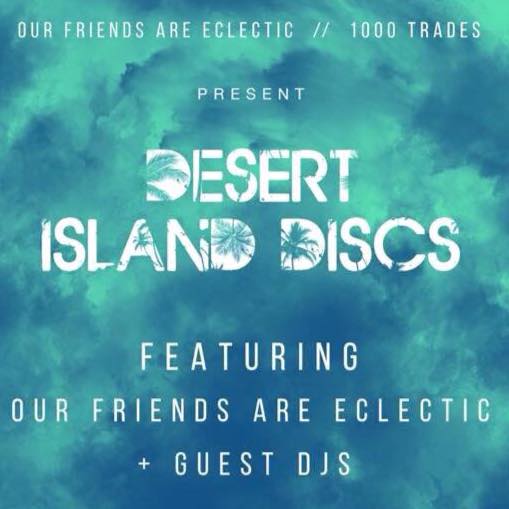 What is Desert Island Discs

On Saturday November 11th from 12pm until 8pm, Chris Bridge and Steve Bignell aka “Our Friends are Eclectic” launch their inaugural “Desert Island Discs” event hosted at 1000 Trades on Frederick Street in Birmingham’s Jewellry Quarter district. “Desert Island Discs” is set to run Bi-monthly with some great DJ’s and guests already lined up for future events!

So what is “Desert Island Discs”? Well, The original Radio 4 concept is simple… “Guests are invited to imagine themselves cast away on a desert island, and choose eight recordings, originally gramophone records, to take with them; discussion of their choices permits a review of their life”…

Chris and Steve want to stay as true to this concept as possible. They want to hear those personal eight tracks that you would take away with you. Tunes that mean a lot to you and that you can listen to over and over and over again. They also want to know why you selected these tunes, what the story is behind them and Grapevine Birmingham will be running a blog documenting who has played and the reasons and stories behind their selections.

The format on the day will be:

Things kick off at 12pm with an “album of the day”. This will be a current / classic album and played in its entirety, like everything with Desert Island Discs this is interactive. You will get to choose the album from a shortlist and an online poll. Following this “Our Friends are Eclectic” will bring a chilled out lazy vibe before “Desert Island Disc” kicks off at 2pm until about 6-30pm with “Our Friends are Eclectic” bringing it all to a close for 8pm. Chris and Steve are putting on 5 “Castaways” per session.

The Castaways will be a mix of DJ’s and Non DJ’s. This is a vital component of the concept not just limited to those who DJ. Those “Castaways” on Novembers event are Stuart Robinson, KJ Andrews, Steve Bignell, Al “Fingy” Thomson and Jim The Grin.

But this is not all, no. Midland Record Fairs will be running a small but very well stocked multi genre record fair upstairs, 1000 Trades will be serving a wide range of thirst quenching craft ales and in the kitchen, providing delicious salivating food will be Pietanic.

It’s a laid back daytime affair so families are absolutely welcome, you can definitely expect great music, great ale, great food, great company and the opportunity to dig for those vinyl nuggets. What’s not to like?

When did you start DJing and what got you into it?

I was very fortunate to grow up as the House/Acid House/Rave scene unfolded between 87-early 90’s. There were a lot of switched on musical kids in my school year and we all fed off each other as we hunted for the next great track. I was a little too young for the “summer of love” in 1988 as I was only 15/16, but as those early mix-tapes got passed around we all wanted to DJ.

Our first experience of trying to DJ was trying to mix on a single deck midi system the record being *ahem* mixed into the the tape that was playing. I think I actually started publically DJ’ing back in 1989/90 with little guest slots at a local club (Engine House) and when I bought my decks and started making / giving away mix-tapes to all and sundry it sort of took off from there. One of them got heard by DJ Dick and he handed me my first proper break at the “Breathless” night at Snobs in Birmingham in 1992 off the back of it.

Which were your fave DJ slots and why?

Without question my favourite of all DJ slots was the first time I was asked to DJ at Breathless. I had a phone call from DJ Dick a few nights before asking if I fancied it, I thought it was wind up. This was a VERY big thing. “Breathless” at the time was THE underground club night in Birmingham. The night came, it went very, very well, the feedback was great and Dick made me a resident that very night.

Not so much a slot, but a period. I hung my clubbing DJ headphones up in 93/94 as I was beginning to loose interest. Then in 1996 I got asked to do something different at “Circo” (one of Birmingham’s first late night music bars) and play a night where musically anything went just as long as it was good and had a laid back vibe. I played every Thursday between 1996 -2000 and 5 hour sets were the norm. This is where I really honed how I DJ today.

I hung my headphones up again after the Circo closing party in 2000ish?? only to get the bug again 12 years later and I approached Freestyle at The Bulls Head in Moseley to play a one off set for old times sake. I really loved it, it went down well and I got the bug again. It was at this time I met up with Chris Bridge, my musical brother from another mother, and he let me join his “Our Friends are Eclectic” monkier and here we are today!

Name three of your most revered DJs and explain why?

Growing up there was only one DJ that I really looked up to and that was Sasha. I had loads of his tapes, his mixing was perfect and his choice and variance of tunes set him apart from the rest. Like many other people I aspired to mix like him. I studied his tapes and his long mix in / outs and shaped my mixing style on him.

The other DJ that had a profound influence on me was Birmingham’s very own legendary DJ Dick. “Breathless” was a mecca for me, the music was so, so different to a lot of the other club nights at the time, a lot more deeper and dubby, no other club night was like it.

Again his mixing was on point and musically he was off the scale for me and for many, many others, hence the reason why I was knocked off my feet when he asked be to play at “Breathless”. I am excited to announce that I will be returning the favour as he will be dusting off his headphones to share his Desert Island Discs early next year!

As time has gone on I don’t really look up to any particular DJ individually. These days I really like what Steve KIW and David Pickering are doing with their Balearic Assassins of Love / Million Sunsets thing, likewise Andy Pye and Balearic Social. I also like Steve Cobby (he has a new LP out and I hear it is superb – buy it) and Graeme Fisher. All of these guys don’t stick to one genre, play a great mix of music that flows so, so well whilst also maintaining their individualism.

What made you come up with the idea to create a Desert Island Discs event?

I have a thing for lists and if you add music to it I am always thinking of my best so and so tracks. I love it when “7 tracks in 7 days” type thing goes viral on a particular social media platform. I am always nosey and interested in other peoples musical choices and the reason why, the feed also gets filled up with great music for a short period of time and the subsequent on-line discussion is rife.

As a keen 6music listener, I also really enjoy the various listener orientated take overs and back in 2013 I took part in Lauren Laverne’s “Bio-rhythms” slot where listeners get to choose 3 tracks that strike a physical, emotional and intellectual connection. This made me think wouldn’t it be good if we could recreate something in a more virtual bar type environment getting as many people involved as possible.

The Desert Island Disc theme always has been an interest of mine and seemed the ideal outlet. The idea of getting 5 or so people to choose and play their eight Desert Island Discs in a chilled out bar setting then writing about their choices was a pipe dream for many years. Then over a few beers I discussed it with my DJ partner in crime Chris Bridge who loved the basic concept and then put more meat to the bone, more structure and turned it into a realistic proposition.

If it wasn’t for Chris this wouldn’t of seen the light of day, he is more of a promoter than I and having found the ideal venue with 1000 Trades, the inclusion of a small record fair and a whip of enthusiasm Desert Island Discs was born. We both can’t believe the level of interest it has generated and it something we should of both done a long time ago.

What would you be into if not music?

That is a really tough question to ask as I cannot imagine not being into music. I am a tad OCD, bit obsessive and I like lists, so maybe a compiler of lists? I am also a bit of a hoarder, collector and a bit of a geek so I could see myself being a bit of a stamp collector. Certainly wouldn’t be DIY as I am a bit of a Frank Spencer on that front and I have two left feet and a 50p head when it comes to playing football. No, I think I will keep with collecting, organising and cleaning and playing my records!