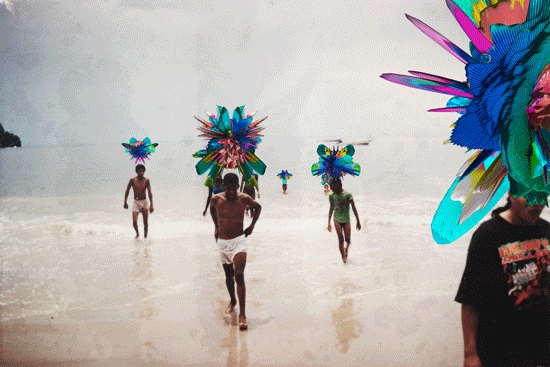 This September, get out and about, discover something new and enjoy the fantastic independent culture Digbeth has to offer!

power of potential versus reality, using unscratched scratch cards as a metaphor. Over

the course of a year Jim has been ‘playing the lottery’, buying over £1000’s worth of

scratch cards and documenting the winners and losers. Earlier in the year Jim found a fresh scratch card on the floor and decided not to scratch it that day, it sat on a shelf in his bedroom for a while before its significance became apparent. ‘The act of resistance was empowering’. Now he collects them, attracted to their bright graphics, finite existence and

mysterious power which remains hidden behind latex. Just pass through, poke your head in, play the fruit machines On the night, Jim will be selling a small edition of work priced relative to the national minimum wage £8.21. Located in a kitsch amusement arcade in Digbeth (next to the coach station), the work displayed is a response the National Lottery and cultural value.

Join us for the opening of ‘Testimony in practice’ exhibition. To celebrate the anniversary of the fall of the Berlin Wall in 1989, Centrala presents ‘Testimony in Practice – Maciej Bączyk and Emma Lockey’ exhibition. Artists are telling an engaging story created from multiple perspectives and memories of life under a totalitarian regime and the system change that followed. They were inspired by family anecdotes, recollections and flashbacks that point out the importance of the year 1989 and the revolutions leading to the fall of the Iron Curtain. The exhibition results from a partnership with University of Birmingham.

Summer Camp is ESP’s annual takeover of Eastside Projects. This year it will run from 27 August to 6 September, when it culminates in a one night only show for Digbeth First Friday! Betsy Bradley, Elvin Sanders, Matt Gale, Sara Trillo and Samiir Saunders will be using the gallery as an expanded studio across two weeks and Dinosaur Kilby, Chantelle Boyle and Alex Billingham will present scratch performances on the night. They will share the space with works by a wide range of other ESP members who are invited to be part of the Summer Camp Showreel or bring an art work to be part of the show for Digbeth First Friday.

Grand Union: ‘And what it became is not what it is now’ Evening Opening & Publication Launch, 6–9pm

The exhibition draws from Decoy Magazine’s unique email subscription programme, which commissioned new work by digital artists around the world. The programme used a collective patronage model and endeavoured to protect the rights of artists through an informed, sustainable, and contractual sharing platform. The exhibition at Vivid Projects features an archive of digital works from 19 Bcc: commissioned artists, representing a diverse group of contemporary, international, emerging, and established digital artists whose works contend with the limitations and opportunities of alternative distribution channels. Curated by Lauren Marsden for Decoy and produced by Antonio Roberts for Vivid Projects.