Home » What's on » Festival of Audacity Invades The City!

Festival of Audacity Invades The City! 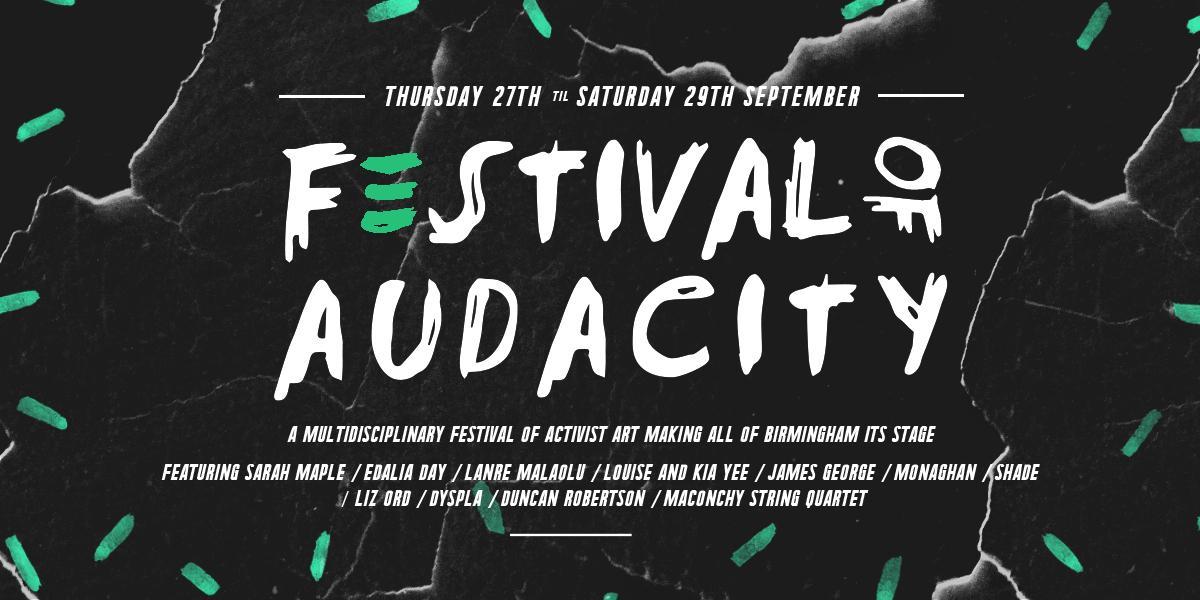 This September, Free Radical is bringing Festival of Audacity, a free, three-day extravaganza occupying unusual spaces across Birmingham. It will be celebrating the best of national and international talent with various politically charged arts experiences taking over the city.

In collaboration with Guest Artistic Directors, BBZ London, Free Radical will unapologetically swarm the city with socially engaged, political art from spoken word to theatre, music to dance, film to art installations. With public spaces like the West Midland Metro tram, New Street Station, COW and the Rag Market becoming its stage; this audacious festival will be very difficult to miss.

Free Radical believes in the power of creativity to do the incredible. Working with young art activists aged 16-30, Free Radical offers various development and performance opportunities for creators and producers, while interrupting and discussing inclusivity issues within institutions.

Having represented Birmingham on stage at the Commonwealth Closing Ceremony, Amerah Saleh, Producer of Festival of Audacity and Free Radical knows the importance that art can play in making people take notice. Speaking about the festival, she said:

“Festival of Audacity will be a pioneering home for young artists who make brave choices about what they say, how they say it, where they say it, and who they address. We want to make space for young creators to take risks and reach people beyond traditional arts venues. For art to have a real impact it needs to be bold, authentic, and audacious.”

Audiences can freely meander with a programme in hand or join the specially curated tour led by young local artists.

Artists programmed as part of this year’s festival include; Sarah Maple (award winning performance artist known for her controversial artworks), DYSPLA (a community of filmmakers, producers and curators championing neurodiverse artists), and SHADE (South-African artists who tackle the intersections of blackness, masculinity, queer identity, and religion).

BBZ London will be mentoring and supporting the artists involved, as well as working to curate the programme. They will do so alongside a number of amazing partners: Arts Council England, BBC Asian Network, Caroline Davis, DanceXchange, MAC Birmingham, and Free Radical’s Southside Producers.

BBZ (Bold Brazen Zamis OR Babes) is a ‘tun up’ prioritising the experiences of queer womxn, trans, and non-binary people of colour – https://www.facebook.com/bbzlondon/

Free Radical is an art activism platform giving young people space, mentally, digitally and physically, to tell stories about themselves and the world – https://www.beatfreeks.com/welcome-to-free-radical/

Beatfreeks Collective is a movement of people and companies using creativity to empower people to challenge themselves and the world they find themselves in – https://www.beatfreeks.com/