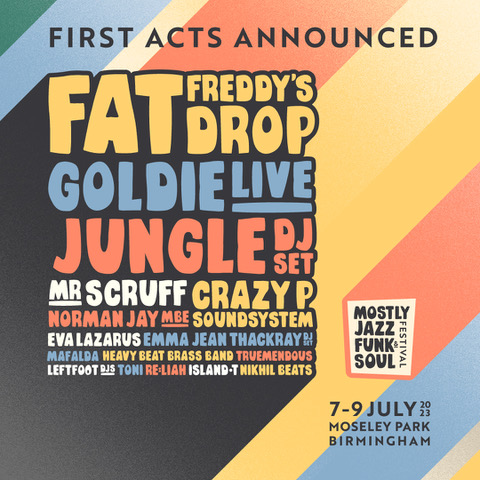 Mostly Jazz Funk and Soul Festival has revealed the first acts set for the 2023 festival – which takes place in Birmingham from Friday 7 to Sunday 9 July 2023.

Set in the idyllic Moseley Park, just two miles outside of Birmingham city centre, the independent festival has built a reputation for presenting iconic and up-and-coming artists in an intimate outdoor setting.

Often name-checked as one of the best live acts on the planet, the 14th edition of the festival welcomes New Zealand’s Fat Freddy’s Drop to the main stage. The Kiwi seven-piece embrace sunshine reggae, psychedelic soul, and R&B, earning them a sizeable clutch of international awards, stretching back over 20 years.

Raised in Wolverhampton, Goldie first made is name as a graffiti artist, but quickly emerged as an inspiring musical force with the Timeless and Saturnz Return albums – both of which had a huge influence on British and international culture during the 1990s. Although his career has taken him in many directions since (including acting), Goldie remains a powerful presence in music.

With over 700,000 records sold worldwide, and over three million monthly listeners on Spotify, Jungle have been at the forefront of the UK music scene since their Mercury Prize nominated and certified gold self-titled debut album in 2014. For Mostly, the duo will be presenting Jungle DJ Set.

Further line-up additions will be announced in the New Year.

Debuting in 2010, Mostly Jazz Funk and Soul Festival is a diverse, vibrant festival, celebrating ground-breaking, innovative UK music alongside international trailblazers. Held in Moseley Park, a stunning 11-acre woodland glade in the heart of Moseley Village, the festival is just two miles from the centre of Birmingham, yet is a world away from city life. With sloping grounds, creating a natural amphitheatre in front of the beautiful lake, it’s the perfect setting for a festival. Each year Mostly Jazz Funk and Soul brings incredible artists, workshops, arts, crafts, and a selection of Birmingham’s most loved street food and drinks vendors to Moseley, for one epic party weekend.