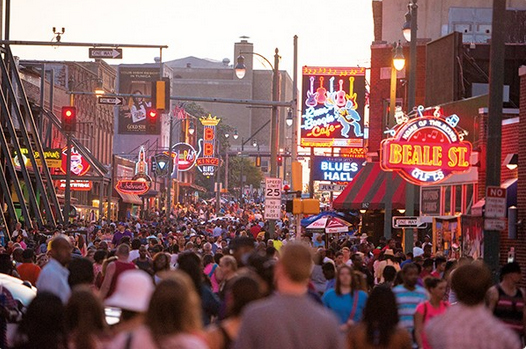 From the early 1900s, musicians from the nearby state of Mississippi made their way to Memphis, Tennessee, attracted by the bright lights of Beale Street.

Among the more prominent arrivals was Gustavus “Gus” Cannon who arrived in Memphis from Red Banks via Clarksdale and lived there until his death in 1979. His tombstone gives his birth-date as 1874 which would have made him 105 years old. He led Cannon’s Jug Stompers and was influential in popularising jug bands in the 1920s and 1930s. Gus wrote “Walk Right In” which became a hit for The Rooftop Singers (1963) and Dr. Hook and the Medicine Show (1977) and was also recorded by Jerry Lee Lewis (1965). Among the other pre-war blues players were Memphis Minnie, Furry Lewis, Bukka White and Jim Jackson.

World War II saw Rufus Jackson arrive on Beale Street where he hosted the talent show at The Palace Theater as well as being a deejay on Radio WDIA alongside a young man named Riley King from Indianola, Mississippi. His radio name, The Beale Street Blues Boy, was later to be shortened to Blues Boy or B.B. King.

The Memphis mix of rural and urban blues proved to be a magnet for several recording companies who came to record such bluesmen as Mississippi John Hurt, Tommy Johnson, Jim Jackson and Memphis Minnie at the Peabody Hotel on Beale.

Sam Phillips set up The Memphis Recording Service Studio, later attaining legendary status as The Sun Recording Studio, where, among other notable artists, he recorded a young man from Tupelo, Mississippi, who went on to enjoy some success. Later on other famous studios opened, such as Stax whose early successes included Little Milton, Albert King, Rufus Thomas and Roebuck Staples, later to be known as Pops Staples. Hi Records had Willie Mitchell, Otis Clay, Syl Johnson, Big Lucky Carter and Big Amos Patten, while Memphis went on to become an important part of the soul music explosion.

All of which makes for a darn good reason for Henry’s Blueshouse at the Bulls Head to present an evening of Those Memphis Blues on Record.

From Beale Street Blues by Memphis bandleader W.C. Handy who also wrote Memphis Blues, originally in support of Boss Crump’s 1909 campaign to be elected Mayor of Memphis. Head down to The Bull’s Head for 7pm on Tuesday next week for this instalment in our new weekly series of blues on record.