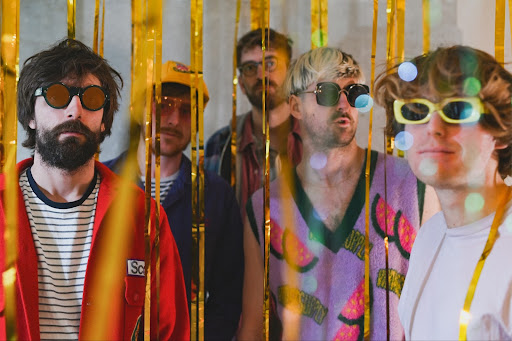 Isle of Wight quintet PLASTIC MERMAIDS will embark on a UK headline tour in November 2022.

Kicking off in Bristol on 2 November, the 11 date album tour will round off at London’s Village Underground on 15 November. Having forged an esteemed live reputation, with emphatic sets at Glastonbury and Camp Bestival under their belts from earlier this year, the run will also see the full band joined in London by a string section and backing singers.

The November tour follows the release of the band’s acclaimed second full-length album ‘It’s Not Comfortable to Grow’, out now via Sunday Best. A profound and emotional exploration of the many facets of heartbreak, the record sees the endlessly inventive Isle of Wight five-piece facing up to their dark side and was praised in a 5* review by The Independent for “Its compositional brilliance and, contradicting the title, proof this band are evolving in spectacular fashion”. It features the singles ‘Girl Boy Girl’, ‘Disposable Love’, ‘Something Better’ and ‘Elastic Time’, which received multiple plays on BBC 6 Music, including a premiere on Lauren Laverne’s show.

The creative force at the heart of Plastic Mermaids is Douglas and Jamie Richards, two brothers who approach life like an art project. Joined by Chris Newnham, Chris Jones and Tom Farren, together they put as much love into their band’s visual concepts and staging as they do into their unique brand of psych-rock and electronica.

For Jamie, a tech genius who insists on making a piece of equipment for every sound he imagines in his head, the last two years have been busy with building and marketing his Planetarium effects pedal — a machine that makes lush, swirling reverb. It’s been used by Bon Iver, War Paint, Kurt Vile, Grandaddy, Wilco, Chvrches, Bicep, Glass Animals and more, and he even gave an early model to Flaming Lips’ Wayne Coyne.

Described as a “psych-pop force” by The Line of Best Fit, Plastic Mermaids have attracted praise from the likes of Lauren Laverne on BBC 6 Music, The Fader, Louder Than War and more, with The Independent praising their at 2022 Glastonbury set as “completely unique… a joy to behold.” (5*)Having recruited the accomplished Ant Whiting (MIA, Lana Del Rey) to assist with the new album, the outcome demonstrates exactly what the band do best. Filled with catchy hooks, intriguing lyricism and fuzzy synths, all underpinned with the electro rock ecstasy of LCD Soundsystem or Animal Collective, the tracks are available to hear now HERE.

In celebration of their latest material, Plastic Mermaids are now gearing up to bring their spectacular live show to UK audiences this November. Catch them at these dates below: