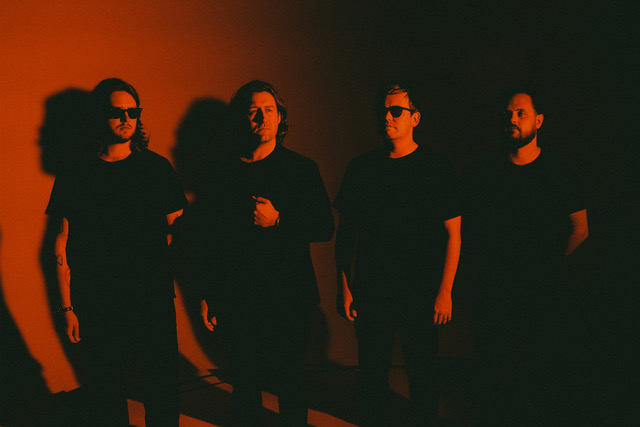 IST IST are back with the insurgent new single “Stamp You Out”.

The track arrives in tandem with the announcement of ‘Protagonists’, the band’s third studio album, which is confirmed for release on 31 March 2023 (via Kind Violence Records).

Delivering a resolute punch with an acerbic sting in its tale, new single “Stamp You Out” sees the Manchester band return to the spotlight with commanding form and typically uncompromising style.
From its blistering post/punk guitar lines to its punishing percussives, “Stamp You Out” creates an impending atmosphere of anxiety throughout. With Adam Houghton’s trademark baritone vocal booming with all the force of an omnipotent autocrat at the lectern of a police state; it makes for a powerful statement of intent that instantly envelops listeners back into the shadow-strewn world of IST IST.

Speaking about “Stamp You Out”, Houghton says:
“[Stamp You Out] tips its hat to the previous IST IST where the modus operandi was to try and make an impact in the most forceful way; pounding drums and bass and repetitive lyrics. I remember watching a news report where a politician, whose name I forget, just kept saying: ‘we need to stamp this out’. I was thinking ‘we need to stamp you out’, so I wrote an aggressive fight song and a call to arms about it.”

The single is accompanied by an official video that sees the band deliver a voltaic performance of the track against a flurry of incandescent lights. Watch it here: https://youtu.be/5iHGzYCGHTk Of the video Keating adds:
“We felt like the track is a straightforward rock song which required a straightforward video and we didn’t want to over-embellish the visual aspect. For existing IST IST fans, it re-affirms what we’re all about, and for anyone new it tells you everything you need to know.”

The new single is also accompanied by the announcement of IST IST’s third studio album ‘Protagonists’, out 31 March 2022 via Kind Violence Records. After securing their status as one of Manchester’s most exciting acts with their 2020 debut ‘Architecture’, and then consolidating the title with its 2021 follow-up ‘The Art of Lying’; new album ‘Protagonists’ arrives as something of a new dawn for the four-piece. As Andy Keating says:
“This was our first straightforward album, which sounds strange given it’s the third one. Our first album was a little bit of a back catalogue, and the rest was written in the same vein to have a coherent record. The second album was a stab in the dark and written and recorded during lockdown restrictions, but it broke us into the top 100. ‘Protagonists’ feels like the first album where there’s no pressure.”

An album all about new beginnings, with a nod to the trials and tribulations of love, tricky family relationships and the feeling of being trapped by the past, ‘Protagonists’ arrives as an attestation to a band sure of their own identity. With the time and space to experiment in order to solidify their own sound, Keating adds:

“We originally started just exploring sounds and textures which appealed to us, and it evolved into fully-fledged songwriting. There are some elements which hark back to our ballsy days of a heavy sound, but we feel like this is a band expressing themselves how they want to.”

Owing its title to songwriter Adam Houghton’s magpie-like method of writing, ‘Protagonists’ finds the frontman taking prominent characters that have caught his imagination, whether fictional or non-fictional, and transplanting them into dystopian worlds with new and uncertain outcomes. As Hougton explains:

“My process has always been taking inspiration from everything around me including but not limited to TV, Books, Movies, Newspaper, Articles on Wikipedia, Crime Documentaries etc. I then use these sources to craft fictitious stories around an imagined persona. The title ‘Protagonists” seemed to work with this method.”

Blurring the lines between fact and fiction and traversing a broad spectrum of genres, tracks like “Nothing More Nothing Less” — a  “simple love song written from a woman’s perspective” — take on a gauzy and ethereal pop-tinted quality, while slightly more menacing moments like “Fool’s Paradise” and “Trapdoors” find closer alignment with the band’s brooding, brazen rock roots.

From future favourites like “Something Has To Give”, a jittering guitar track about “a stick or twist situation”, to fully fitted-out classics like the anthemic “Emily” (a live fixture from the band’s earliest days, which has finally found its place on this record), ‘Protagonists’ will provide plenty to pore over for fans new and old.

Recorded and mixed by Michael Whalley and IST IST at Milkshed Studios, the album was mastered by the legendary  Greg Calbi and Steve Fallone at Sterling Sound (The National, Yeah Yeah Yeahs, Interpol).

A compulsive, character-driven record from a band hitting their creative zenith, IST IST will release ‘Protagonists’ in Spring of 2023.

To mark the release, IST IST will be playing a special hometown launch show for the new record at the Manchester Ritz in March next year – details below. There will also be a small preview tour before the end of 2022, with dates in London, Birmingham and Hebden Bridge. Standby for further UK live dates soon.

Established in late 2014, IST IST have forged a formidable reputation on the back of uncompromisingly intense live shows and a fierce DIY work ethic. Releasing their debut album ‘Architecture’ in the midst of the pandemic on their own label Kind Violence Records, the LP found significant success in the indie, physical and vinyl charts.

Second album ‘The Art of Lying’ was released in November 2021, peaking at number 87 in the UK Top 100 and firmly establishing the band as one of the leading lights of a new era for music born in Manchester. The release was followed by a ten-date UK tour including sold out shows in Manchester, London and Bristol, as well as a string of sell-out European dates too. The band will release their much-anticipated third album, ‘Protagonists’ in 2023.