Last night I dreamt I went to the cinema… 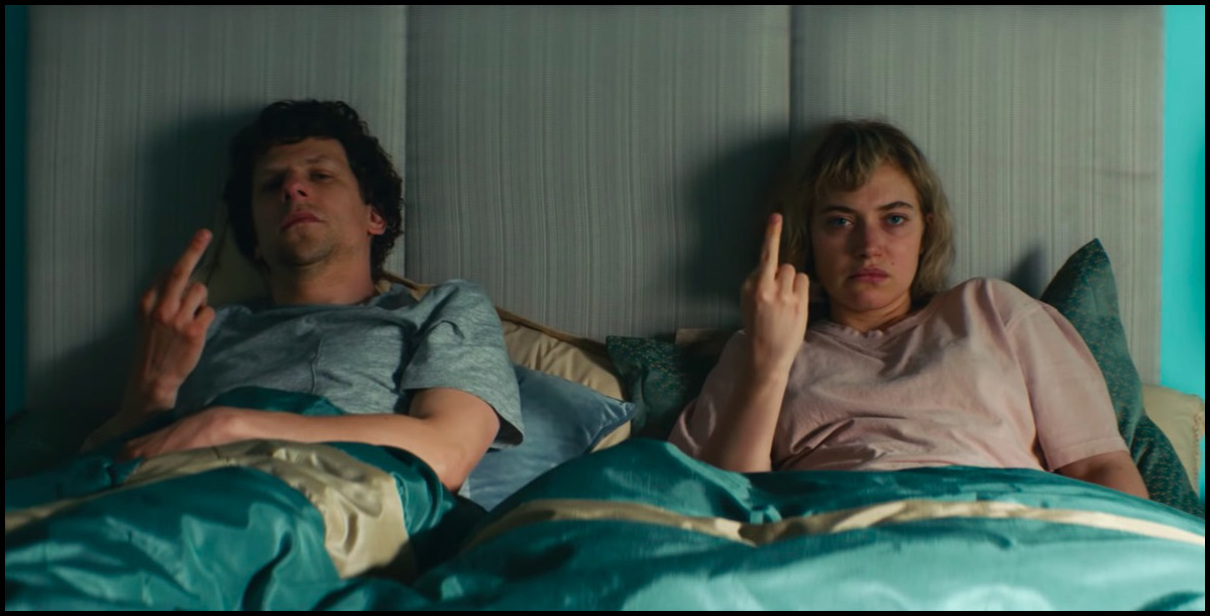 Last night I dreamt I went to the cinema… Rapidly taking on a nostalgic glow along with pubs and live sport and readily available flour, the communal film experience will be back before too long we hope. In the meantime, like the Dude, Filmwire abides and this month’s roundup contains a whole heap of ideas for home viewing should you happen to find yourself stuck indoors for some reason.

Sending love to all of our cinemas and festivals at this bloody difficult time, and to “all those wonderful people out there in the dark.”

FILM OF THE MONTH: END OF THE CENTURY

Lucio Castro’s eloquent new feature End Of The Century begins with twelve wordless minutes – a bold move from any director, let alone one making his feature debut. But it’s clear from those opening scenes of silent activity that Castro has a confident grip on his fluctuating narrative, one which quietly unearths the desires and regrets of two men (Juan Barberini and Ramón Pujol) who become intimate in 2019, only to realise they met each other twenty years previously. A ‘what if?’ kink in the story could have verged on cheesy if handled poorly, but End Of The Century is too wise and worldly a film to veer into schmaltz, instead offering a pleasingly ambiguous third act that’s as thoughtfully reflective as everything that preceded it. Kudos to Barberini and Pujol too, who provide a deftness of touch that perfectly complements Castro’s meditative style.

Jesse Eisenberg and Imogen Poots find themselves trapped in a suburban nightmare courtesy of Lorcan Finnegan’s unsettling new film about an aspiring young couple stuck in an identikit neighbourhood – and then forced to raise a baby that’s literally dropped on their doorstep. The horrors here are all rooted in the mundanity of modern day life, with special vitriol saved for the terrors of parenthood, as said baby sucks the life out of Eisenberg and Poots. Parents will cringe in recognition.

Following two English language films – including one for Netflix – Haifaa Al-Mansour returns to her native country of Saudi Arabia with this confident drama about a young doctor named Maryam (Mila Alzahrani) who runs for a position on her local council. Although Maryam faces the brutal sexism that every woman faces in Saudi Arabia, The Perfect Candidate is actually full of optimism from the very first shot, which shows Maryam driving a car in a country where such a thing was illegal before 2017. Al-Mansour’s classy film is hopeful in the face of change, but demands more.

Hard times demand a dose of Ghibli. Netflix recently gobbled up the rights to nearly all of the Studio Ghibli films (barring Isao Takahata’s devastating Grave Of The Fireflies), and now the final batch of exquisite animations have been released onto the streaming giant’s infinity loop of titles, including Ponyo, The Wind Rises, Whisper Of The Heart, the much loved Howl’s Moving Castle and the lesser known Pom Poko.

Originally planned as a cinema release, MUBI have brought ambitious Brazilian sci-fi western Bacurau onto streaming sites early to compensate for cinema closures. A blend of arthouse satire and gory B movie, Bacurau sees a rural Brazilian community find itself under attack by wealthy elites (led by exploitation flick stalwart Udo Kier) who are looking to kill for sport. It’s a stylish and unashamedly unsubtle allegory for the damage the rich inflict on the poor, with a few unexpected sci-fi tweaks.

Catherine Deneuve and Juliette Binoche in a film directed by Palme d’Or winner Hirokazu Kore-eda? Yes, please. Deneuve is magnificent as a diva movie star whose new memoir looks set to ruffle a few feathers, not least as it pertains to her daughter (Binoche) in a family where everyone is putting on a performance. Because it’s Kore-eda, any assumption that you know where this perceptive family drama is going is soon thrown by the wayside, and the ‘film within a film’ Deneuve’s character performs in just adds more knots to the tangle of emotions on display.

Available on Netflix from 17 April.

Culture Club by Club des Femmes
Each week, during this period of social distancing, Club des Femmes will announce one object of culture ­– a book they’re reading, an album they’re listening to, a film they’re watching, an artwork that’s inspiring them. They’ll tell you a little about why they find this object exciting as an invitation for you to join in, to read along, listen along, watch along with them each week.

#fridayfilmclub hosted by @_CarolMorley
Director of Out of Blue and Dreams of a Life will be hosting a watchalong every Friday, taking films from the public domain so it’s completely free.

WTF – A Box of Odd
There’s a treasure trove of free archive films on BFI Player and if you’ve a taste for the curious or the kitsch, the bewildering or the bizarre, then look no further.

Everyman Watch Parties
Every Saturday night at 8.30pm the Everyman team pick a film and you can watch along. It’s that simple. Last week’s pick was Booksmart.

Into Film Guides
For those of you housebound with kids Into Film have released some handy guides for parents who are supporting home learning, includes bangers like Toy Story 4, Willy Wonka and the Chocolate Factory and Kiki’s Delivery Service.

Curzon Living Room Q&As
As part of its On Demand service, Curzon Home Cinema are organising a series of watchalongs with director Q&As. Titles include Only You, Force Majeure and Victoria.

This month we asked some of the region’s programmers to share their top films to keep you entertained during lockdown, and they’ve come up with some absolute corkers!

SPRING BREAKERS
Harmony Korine is the very definition of an acquired taste. This is, after all, a director who made a film about elderly people humping dustbins. Yet Spring Breakers is the one film from Korine’s eclectic CV that everybody should taste, even if it’s just to say they hate it (and plenty do). A neon-drenched American fever dream about four college girls who rob a diner so they can go and party in Florida, Korine’s film is loud, tasteless and childish. It’s also wickedly perverse, constantly surprising and very funny – sometimes all in one scene, as when James Franco’s moronic drug dealer sits at a piano and serenades said college girls with a Britney Spears song whilst they twirl around him, clad in pink balaclavas and brandishing shotguns. Spring Breakers demonstrates the visceral, giddy and often transgressive thrill of the movies in one gloriously over the top package. You’ll love it. You’ll hate it. But you sure won’t forget it.
Available now on Amazon Prime, iTunes and Sky Store

FACES, PLACES
Agnès Varda left us just over a year ago. Her love of people and small communities was inspiring and, at a time where neighbourhoods remotely get together to help each other, she feels like the perfect person to invite into your living room. In 2016, Varda and JR embarked on a trip around France to meet those who make villages and unsung communities great, becoming unlikely friends – and a now iconic duo – along the way. Faces, Places celebrates the everyday people around us in the most tender, humanistic way, and now may be the perfect time to (re)discover it.
Available on Netflix, YouTube and GooglePlay

THE CASTLE OF CAGLIOSTRO
Before going on to start Studio Ghibli, Hayao Miyazaki’s debut feature is a camp, colourful romp featuring ancient castles, nefarious plots, and a high-octane car chase in a Fiat 500. When ‘gentleman thief’ Lupin III discovers his most recent spoils to be counterfeit, he tracks their source to an ancient city high in the mountains. Miyazaki’s only film based on someone else’s characters, it lacks the grand themes of some of his later work, but in doing so becomes his most playful, and one of his most enjoyable.
Available on Netflix

AND THEN WE DANCED
Directed by Levan Akin, this film not only gives its audience one of the most tempestuous queer romances to date, but reveals a lot about human desire, will, and the power to realise your truest dreams, at any cost. The story follows Mehrab, a skilled dancer who has been training all his life for a spot on the National Georgian Assemble. But when Irakli returns to town, everything Mehrab knows about himself is challenged. Wonderfully technical and sumptuously seductive And Then We Danced offers a closer look at what it’s like to find your queerness in Tbilisi.
Available on Peccadillo Player, BFI Player, Curzon Home Cinema.

NAUSICAA: VALLEY OF THE WIND
There is something comforting about many of Studio Ghibli’s films, especially those directed by Hayao Miyazaki, Nausicaa (released before the studio was founded) is to my mind the best of the bunch. With fantasy and post-apocalyptic vibes, and set in a threatened, lush green world; its eco message is clear but not overt. There are plenty of hugely enjoyable characters, and the animation, score and voice cast (both Japanese and English versions) are all superb. Whether you’re watching for the first time or revisiting the Valley of the Wind, Nausicaa will transport you to another world for two blissful hours.
Available on Netflix

PADDINGTON
For me this film radiates pure joy and that’s exactly what we all need at the moment! It’s a classic tale of a talking bear who travels from Peru to live with the Brown family in London and defies the odds to defeat an evil taxidermist. It’s full of wonderfully comic moments (toothbrushes make me chuckle every time) and carries the very timely message of the importance of looking after one another. Also, any film with Midlands hero, Julie Walters, gets my vote too.

Available on Amazon Prime (along with the delightful sequel, Paddington 2).