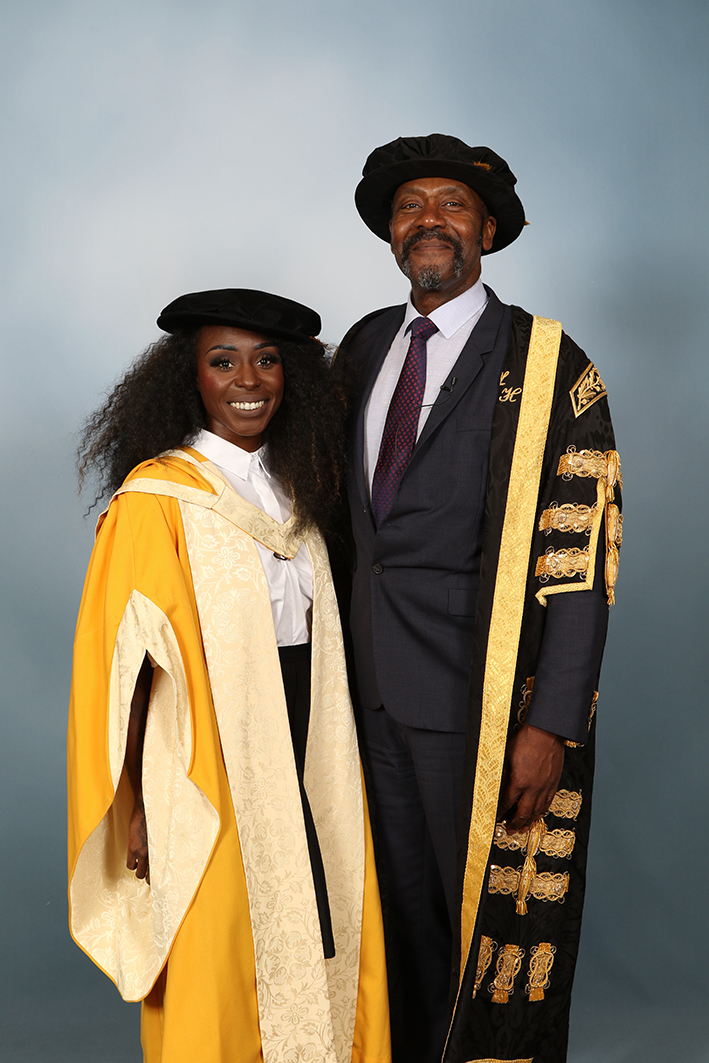 The acclaimed British singer and composer Laura Mvula has paid tribute to her family in a heartfelt acceptance speech after receiving an honorary doctorate from Birmingham City University.

The music composition graduate and city native was conferred the honour marking her outstanding contribution to music before an audience of music and art graduates at the world-renowned Symphony Hall in Birmingham on Tuesday 23 July.

After receiving the award by Birmingham City University Vice-Chancellor Philip Plowden, and following a warm welcome by the Chancellor Sir Lenny Henry, Ivor Novello award winner and former Alumna of the Year Dr Mvula took the opportunity to share a few words of wisdom with the University’s latest graduates, saying, “There’s no rush, despite the pressures and pace of our modern, millennial life. I urge you to have patience, be who you are, don’t allow yourself to be defined, give thanks and embrace the change.”

In her acceptance speech, the ‘Sing to the Moon’ star referenced her musical journey to date and paid a tearful tribute to her parents and siblings, saying, “I was raised in a family of faith-led musicians – so music and truth were our everyday language. I was taught to embrace the excitement and turbulence of a creative musician’s life with the goal being to make music that was honest, innovative, from the heart.”

The musician also spoke candidly about losing out on a Brit Award (Best Female Solo Artist, 2014) to fellow pop star Ellie Goulding, as well as the stage fright she has faced in the past, by explaining, “There have been many times where I have had to find my way back to my foundation to begin again. Back to the Green Garden of Kings Heath, back to the practice room corridors, and back to this hall. It’s difficult to describe the depth of honour and thanks I feel to be conferred an Honorary Doctorate from the Royal Birmingham Conservatoire.”

Recognised as one of the brightest musical talents to emerge from the city in recent years, following a place on the Brits Critic’s Choice Award shortlist Laura achieved mainstream global success in 2013 with the release of breakout single ‘Green Garden’ and debut album Sing to the Moon that year, landing her first of two Mercury Prize nominations.

The songwriter and musician’s unique exploration of jazz, R&B, soul and pop – drawing on her classical training at Royal Birmingham Conservatoire – produced a now Gold-certified work described as ‘bewitchingly beautiful’, ‘the fanfare arrival of a unique new voice’ and ‘an extraordinary sensation of light, air, and space’ by international music critics.

Laura has gone on to record, perform and collaborate with some of the biggest names in contemporary and classical music including Niles Rogers, Tom Odell, London Symphony Orchestra, Jules Buckley and the Metropole Orkestra – including a concert as part of the BBC Proms – and released second album The Dreaming Room in 2016.

Crowned MOBO Best Female Act and Best R&B Act 2013, Birmingham City University Alumna of the Year in 2014, and Ivor Novello Album Award winner in 2017, the 32-year-old laid foundations for her career following her graduation from the prestigious Conservatoire as a member of a capella group Black Voices and in the role as director of Lichfield Community Gospel Choir.

In 2018, the world premiere of a new Laura Mvula work ‘Like A Lion’ at BBC Proms, which set three poems by the Nigerian poet and novelist to a gospel-inspired collection of three pieces of music, was warmly received by critics and audiences alike. Later that year, Laura performed in the world class Symphony Hall as the special guest of singer, musician and producer David Byrne.

The Birmingham City University alumna’s song ‘Sing to the Moon’, taken from her 2013 debut album, will feature in the 2019 Last Night of the Proms concert, with Sakari Oramo conducting the BBC Symphony Orchestra and Chorus at the Royal Albert Hall. The concert will be broadcast across BBC One and Two.