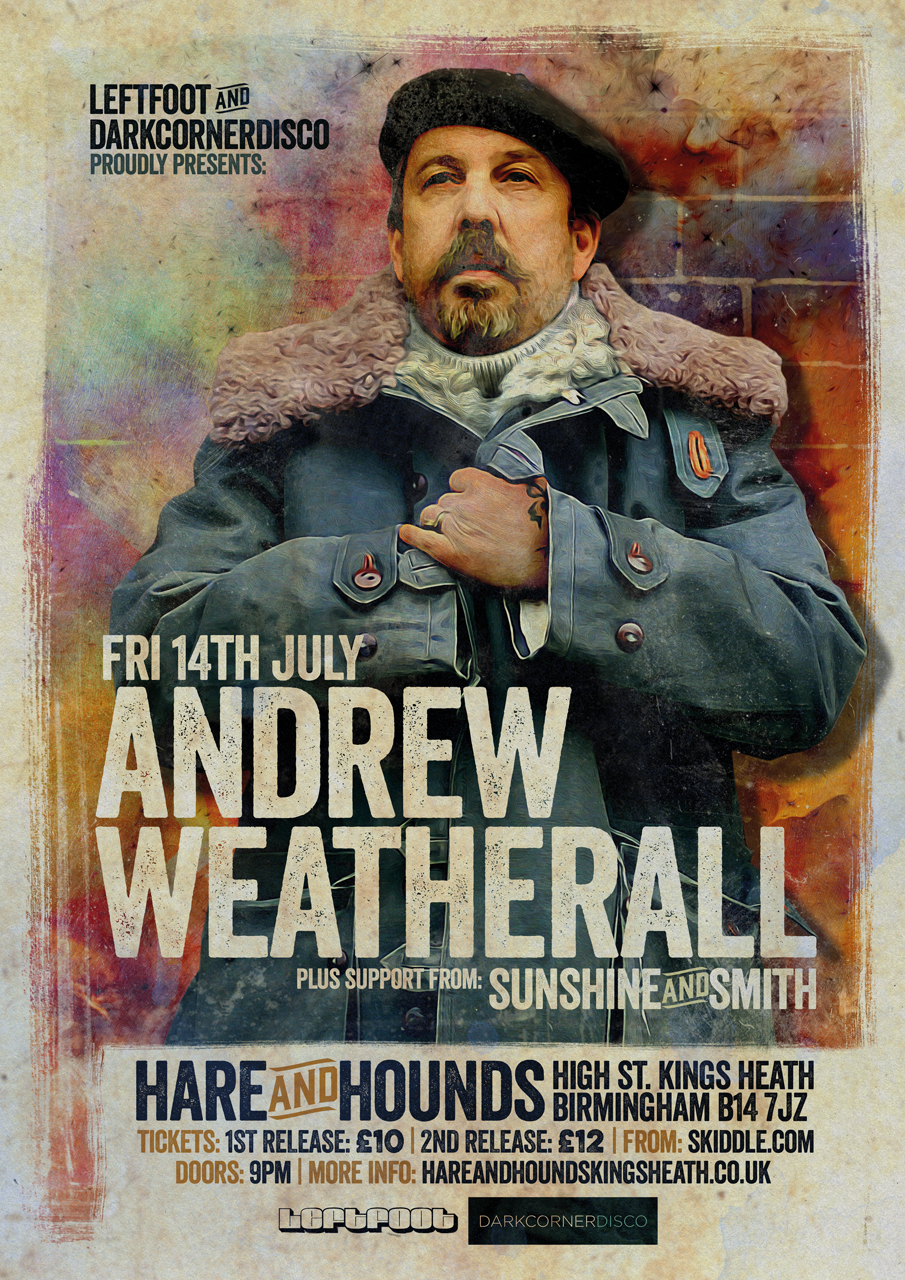 Plus Support from Sunshine & Smith

Andrew Weatherall’s DJ career started to take off when he met Danny Rampling at skater Bobby’s party that he played at in Chapel Market, Islington, and Rampling invited him to play at his club night Shoom. Farley and Weatherall became regular Shoom DJ’s, playing the upstairs room, and also at Paul Oakenfold’s Future/Spectrum nights and Nicky Holloway’s Trip. They also did their own parties and started a record label under the name of Boy’s Own Recordings. Along with Pete Heller (who was also a Shoom DJ), engineer Hugo Nicholson and singer Anna Haigh, they released two singles as Bocca Juniors on the label, “Raise (53 Steps to Heaven)” and “Substance”.

Weatherall’s first studio work was alongside Paul Oakenfold on the club remix of Hallelujah for the Happy Mondays. Other remixes followed, notably “World in Motion” for New Order, “Loaded”, a hit remix of Primal Scream’s earlier track “I’m Losing More Than I’ll Ever Have”, and the widely acclaimed ‘A Mix of Two-Halves’ version of Saint Etienne’s cover of Neil Young’s “Only Love Can Break Your Heart”. His remix of My Bloody Valentine’s “Soon” was ranked at number 1 in NME’s list of “The 50 Best Remixes Ever”.

In 1992, Weatherall left Boy’s Own, which changed its name to Junior Boy’s Own. He formed the electronic music trio The Sabres of Paradise in 1993, starting a record label under the same name and promoting Sabresonic club nights at the Happy Jacks nightclub. In early 1996, after shutting down Sabresonic, Weatherall and Keith Tenniswood became Two Lone Swordsmen, signing to Warp. They also started 3 labels under the Emissions umbrella (Emissions Echoic, LoFi & Static), which combined to become Emissions Audio Output and started the Bloodsugar night. After this disbanded, they set up the Rotters Golf Club label for their own dancefloor-orientated work, and also recorded on Warp.

Weatherall has produced such artists as Beth Orton, Primal Scream and One Dove, and has remixed the work of Björk, Siouxsie Sioux, The Orb, The Future Sound of London, New Order, Manic Street Preachers, My Bloody Valentine, James and many others. Most recently he produced the album Tarot Sport for Fuck Buttons and assisted The Twilight Sad with the production of their third studio album, No One Can Ever Know.

In 2006 he released his debut solo EP “The Bullet Catcher’s Apprentice”, followed by his debut solo album “A Pox on the Pioneers” in 2009. Both were released on his Rotters Golf Club imprint. His music has soundtracked commercial advertisements for vehicles. Weatherall’s “Feathers” was used for the Volkswagen Tiguan in 2007 and Two Lone Swordsmen’s “Shack 54” was used for the Ford Fiesta in 2009. In 2013, The Asphodells, formed by Weatherall and collaborator Timothy J. Fairplay from Battant, released the album “Ruled by Passion, Destroyed by Lust” on Weatherall’s Rotters Golf Club imprint.
Weatherall has cited humour as an important component in his musical ideology.