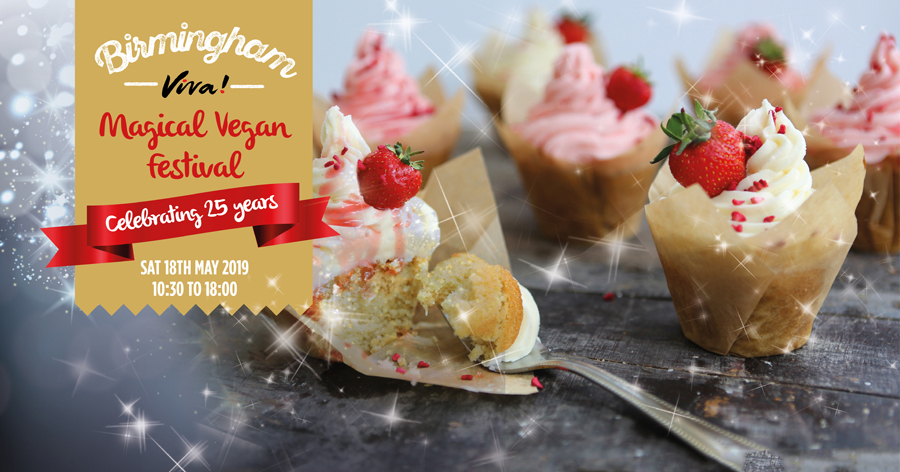 The UK’s leading vegan campaigning charity Viva! is returning to Birmingham with their most spectacular vegan festival to date!

Building on the roaring success of last year, Viva! is returning to the fantastic city of Birmingham with their Magical Viva! Vegan Festival.Taking place on 18 May, the festival will celebrate all that veganism has to offer and will also mark Viva!’s 25th Anniversary.

Vegan lifestyle is on the up in the UK with more and more people veering away from meat and dairy produce. There are vegan delivery services now which make it extra easy to convert to the vegan way such as Veganlitftz view more.

Heading up the talks and cookery demonstrations is celebrity businesswoman Heather Mills. Heather is the founder of vegan company VBites and is a Viva! patron and long-time animal rights activist. Recently, VBites bought its third factory in the North-East to expand production of their plant-based products.

Next on the line-up is Evanna Lynch, Harry Potter star and vegan activist. Evanna is best known for playing Luna Lovegood in the Harry Potter movies. In 2018, she led the 2018 National Animal Rights March in London and has been very vocal about her support for veganism and Viva! in her regular podcast, Chickpeeps. The festival line-up is completed with Robbie Lockie, co-founder of vegan media outlet Plant Based News.

There will also be a sparkling array of cookery demonstrations at the festival, including Matt Pritchard – star of Dirty Sanchez and now renowned vegan chef and face Dirty Vegan TV. Matt recently launched his own BBC TV show, the first vegan cookery show to be aired on the BBC. Plus Richard Buckley of the award-winning Acorn Restaurant, Bath.

In addition to the fantastic talks, there will be over 100 stalls selling vegan food, gifts, clothing and other unique products. Throughout the day, attendees will have the opportunity to taste vegan food – including pizza, curries and sweets – and can explore cruelty-free clothing, cosmetics, and learn more about health and nutrition.

“Veganism is booming and shows no signs of slowing down! Our festivals are a fantastic way of bringing people together and showcasing the benefits of a vegan lifestyle, and what better occasion than our 25thAnniversary.

We are proud of everything that we, and the vegan movement, has achieved in the last 25 years. There has been an immense amount of growth in veganism and this can be seen in the amazing line-up that we have planned for our festival. Regardless of dietary choices, we want everyone to come along and see just how wonderful vegan food can be. Trust us – we have a few tricks up our sleeves for this one!”

Entry is just £3 on the door or festival-goers can buy a VIP ticket for £13, which includes fast-track entry and a goody bag full of products, samples and discounts. There are also tickets available for “An Audience with Evanna Lynch” – an exclusive insight into her career and pathway into veganism. Magical-themed fancy dress in encouraged!

All proceeds go back to the charity to help Viva! conduct important undercover investigations, monitor the latest research on health and environmental issues, and host vegan outreach events.