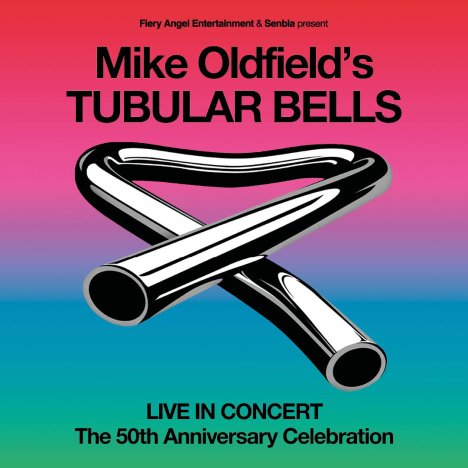 To celebrate next year’s 50th anniversary of Mike Oldfield’s Tubular Bells, the multi-million-selling and multi-award-winning album will be performed live in concert at The Alexandra Birmingham on Monday 13 February 2023.

Part of the fabric of popular culture, Tubular Bells is world-renowned as one of the most celebrated examples of music in film for its soundtracking of horror classic The Exorcist. Its legacy was cemented with Oldfield’s performance of the album’s main theme at the iconic London 2012 Olympics Opening Ceremony, one of the rare performances of the project he has given.

A version of the show premiered at Royal Festival Hall on the Southbank in London last year, with The Times calling it ‘… a slick presentation of Tubular Bells at 50’, and the Mail on Sunday commenting ‘… the bells do the business’.

Tubular Bells, created in 1971 and released in 1973,was the debut studio album by English multi-instrumentalist, composer, and songwriter Mike Oldfield. At just 17 years old when he started composing the music, Oldfield recorded and played almost all the instruments on the album, gained worldwide recognition when the opening theme was used for the soundtrack of the horror film, The Exorcist and went on to become the highest selling instrumental album of all time.

A bold and progressive fusion, Tubular Bellsis a journey through classical, jazz, folk, progressive rock, and electronica and went on to win a Grammy for Best Instrumental Composition in 1974.

Robin Smith, conductor of the show, was completely mesmerised by Tubular Bells the moment he heard it. He was educated at the Royal Grammar School High Wycombe and then studied Composition at the Royal College of Music. He spent several years working as a piano/keyboard player in Africa, the Caribbean, USA, and Europe before coming back to UK to join National Youth Jazz Orchestra. He quickly became the principal pianist and spent most of his free time composing new jazz compositions.

Smith has collaborated with Mike Oldfield for over 30 years, with performances of Tubular Bells including at Edinburgh Castle, and also the 2012 Olympic Games Opening Ceremony.

On the tour, Smith says:

“Along with the musicians, I’m really thrilled to be offering this beautiful re-imagined version of Tubular Bells to a wider audience up and down the country. It was premiered at the Royal Festival Hall in August 2021 to great acclaim, as an early celebration of Mike Oldfield’s stunning work – so to be touring the UK in the 50th year is a huge privilege for me and a perfect tribute to one of England’s greatest composers.

Joining us on the tour will be the renowned guitarist, Jay Stapley who performed with me at the iconic Tubular Bells II concert live from Edinburgh Castle in 1992.

The wonderful thing about Tubular Bells is that it never seems to age, the actual composition is just perfect and is as spell-binding now as it was 50 years ago. It incorporates so many things – folk and rock,  blues and jazz which evoke such melodic beauty and drama. This performance also features others works by Mike: Moonlight Shadow, Omadawn and Summit Day.”

Birmingham’s beloved theatre, The Alexandra, was built in 1901 by William Coutts and throughout its vast history, has become home to first class entertainment. Located in the heart of the city, the theatre welcomes hundreds of performances each year. In 2018, the venue underwent an extensive refurbishment and reverted to its original name, The Alexandra. The theatre is a valuable contributor to culture within Birmingham and the West Midlands, presenting a programme of world class theatre including West End musicals, drama, comedy and more. The Alexandra is part of the Ambassador Theatre Group (ATG). A world leader in live entertainment, ATG is the world’s number one live theatre company, covering every discipline in the industry, operating venues, running major ticketing platforms and producing award-winning shows.