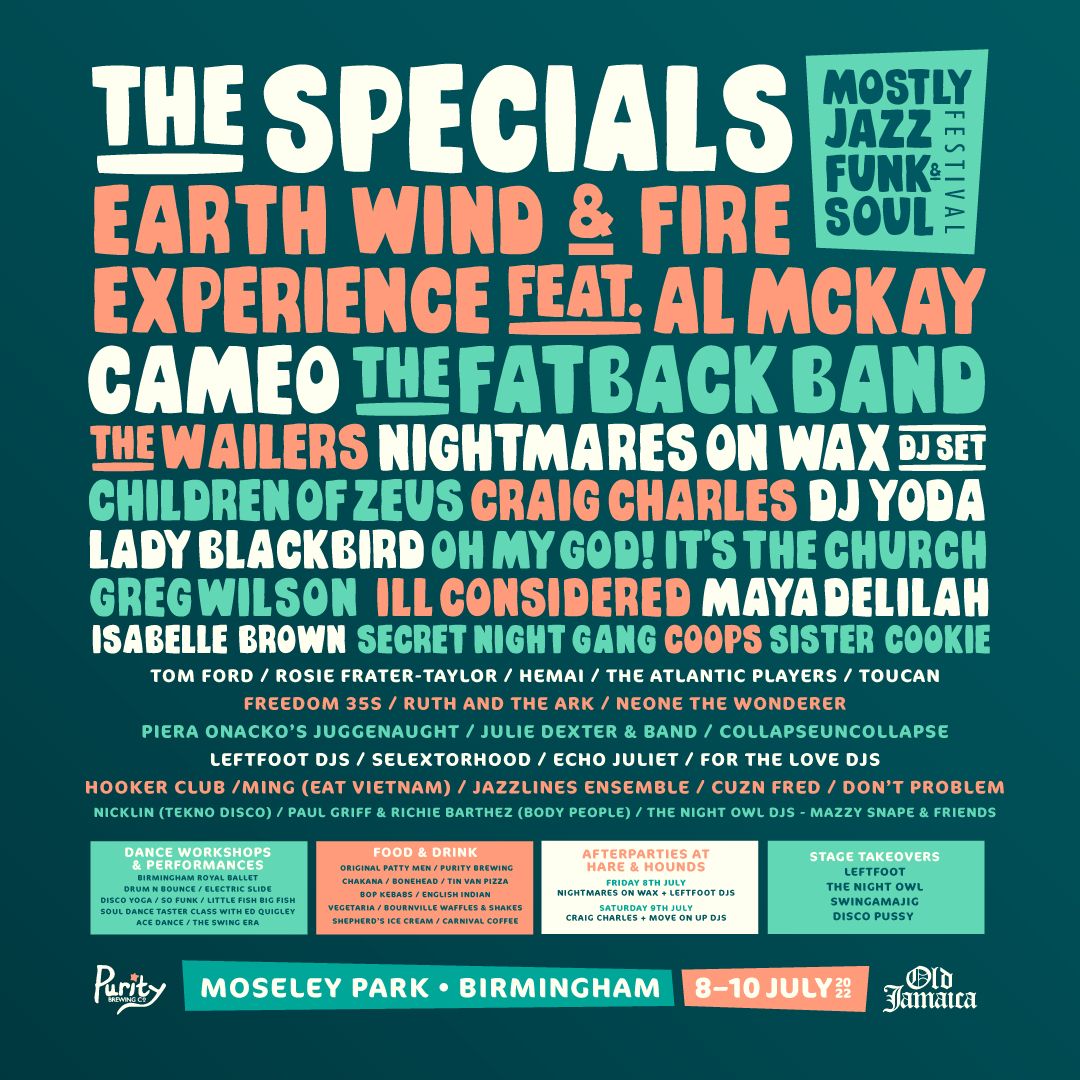 Birmingham’s Mostly Jazz Funk and Soul Festival returns this July with another incredible line-up of world-class artists and the hottest new talent.

The festival kicks off in style on Friday 8 July 2022 as Midlands’ Two-Tone heroes The Specials headline the main stage, with their blend of ska, reggae and punk rock. They’ll be joined by Nightmares On Wax, taking to the decks on the Leftfoot Takeover Stage, as well as hip-hop turntablist DJ Yoda and Manchester soul project Children of Zeus, while up-and-coming artists Coops and Maya Delilah prove the future is very much in safe hands.

Day two (Saturday 9 July 2022) sees the legendary American funk outfit The Fatback Band grabbing the headline slot. Formed in 1970, the US band have revolutionised the worlds of dance, funk, soul, rap and R&B with hits like Backstrokin’, Do The Bus Stop, (Do The) Spanish Hustle and I Found Lovin’.

Of course, Saturday wouldn’t be Saturday without festival regular Craig Charles hitting the decks with his ‘trunk of funk.’ As well as spinning some classic cuts, Craig will also be compering the day’s entertainment, which includes appearances from Oh My God! It’s The Church, Secret Night Gang, Isabelle Brown, Sister Cookie, Toucan, The Atlantic Players, Freedom 35s, Ruth The Ark and more (with a special guest announcement for the Leftfoot Takeover Stage coming soon).

The festival reaches its climax on Sunday (10 July 2022) with a truly mammoth day! The Earth Wind and Fire Experience, featuring Grammy Award-winning guitarist and songwriter Al McKay, take to the stage performing such enduring hits as Boogie Wonderland, September and Fantasy. Prior to their closing set, the festival welcomes much-loved American funk band Cameo (Single Life, Word Up), and true reggae legends The Wailers, as well as contemporary soul mistress Lady Blackbird.

Of course, visitors can get their teeth stuck into more than just music! All weekend festival-goers can tuck into delicious food and drink from the well-stocked bars and independent street food vendors, including beers from Purity Brewing and food from such award-winning favourites as Original Patty Men, Chakana, Bonehead, Tin Van Pizza, Bop Kebabs, English Indian, Vegeteria, Bournville Waffles and Shakes, Shepherd’s Ice Cream and Carnival Waffles. Something to suit all tastes!

Away from the main stages, Mostly also boasts a series of dance workshops with the likes of Birmingham Royal Ballet, Drum ‘n’ Bounce, Disco Yoga, So Funk, Northern Soul and others ensuring everyone is busting their best moves.

Plus, there’s a chance to dance the night away at two Official Mostly Jazz After Parties at the nearby Hare and Hounds, in Kings Heath. The fun continues until the early hours with sets from Nightmares On Wax (Friday 9 July) and Craig Charles (Saturday 10 July).

John Fell, Mostly’s Festival Manager, says: “We’re so pleased to be back this year with a super-strong line-up of jazz, funk and soul, and – thanks to the inclusion of the mighty Wailers and Coventry’s The Specials – ska and reggae too.

“We’re especially looking forward to welcoming The Fatback Band and Cameo, who redefined funk and dance music in the 1970s-1980s, and helped lay the foundations for hip hop.”

Taking place in the beautiful Moseley Park and Pool, the festival continues to be one of the most popular events in Birmingham’s packed cultural calendar, attracting visitors from all over the UK. After a challenging, yet hugely successful event last year, 2022’s festival finds Mostly very much back in full force, with an incredible three-day line-up of live music.