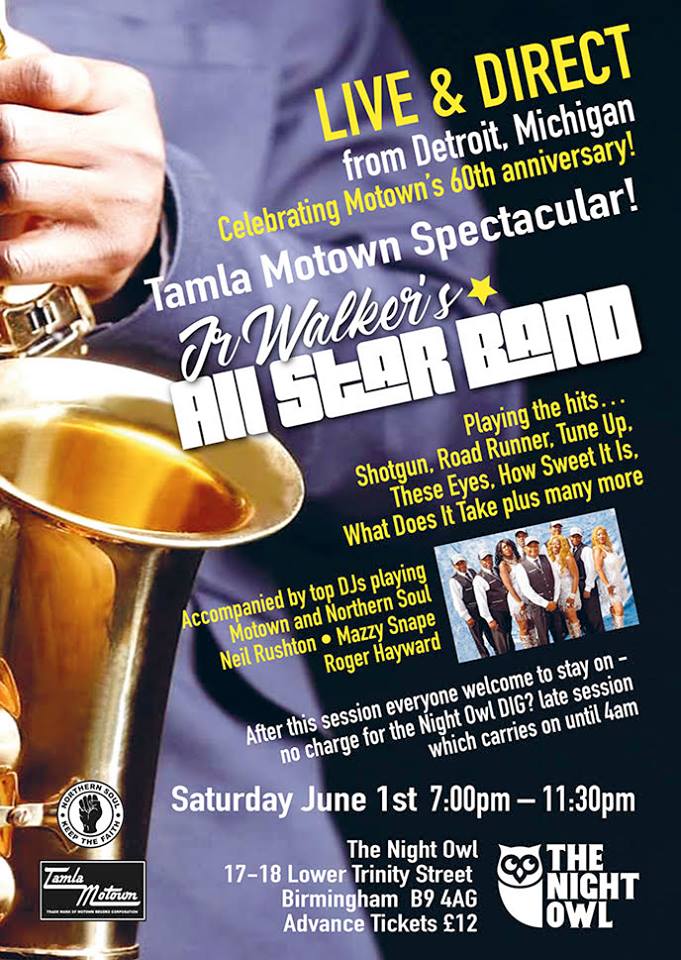 Direct from Detroit – Junior Walker’s All Star Band will be celebrating the record label Motown’s 60th Anniversary with an intimate Birmingham show.

The nine-piece, brass-heavy soul outfit will be appearing at The Night Owl on Lower Trinity Street, Digbeth on Saturday, June 1 as part of a unique UK tour.

We could not miss out playing in the UK as part of the Anniversary. The UK Motown fans are like a family and are always amazing to play for, they’re so knowledgeable. I remember from previous tours that Birmingham was famous for making cars, just like Detroit.

Junior Walker & The All Stars signed to Motown’s soul label in 1964. Autry DeWalt’s (Junior Walker) screaming tenor sax, raucous vocals and raw rhythm & blues inspired approach was a winning counterpoint to the traditional smoother Tamla Motown sound, gripping soul fans across the UK. DeWalt died in 1995, which is when Ronnie Nelson and other All Stars decided to carry on the legacy, including original member Acklee King in their line up.

The music is so timeless and so well loved we could not just let it die out” Ronnie Nelson added. “Autry used a bewildering number of musicians on stage, he never stopped touring. Acklee and myself recorded with him and everyone else was involved on different tours at different times.

The Night Owl has become well established across the Midlands as being the top club for championing soul and retro sounds. Since opening its doors in 2015, many music fans of all ages dance to a number of genres. From Northern Soul, disco, mod, rock & roll and more, many music fans have danced on the intimate club’s wooden sprung dance floor under the bright lights and shimmering disco ball. The Night Owl won best new club in the Birmingham Mail Reader’s Awards soon after opening, and has been nominated for four awards collectively in the upcoming Birmingham Music Awards.