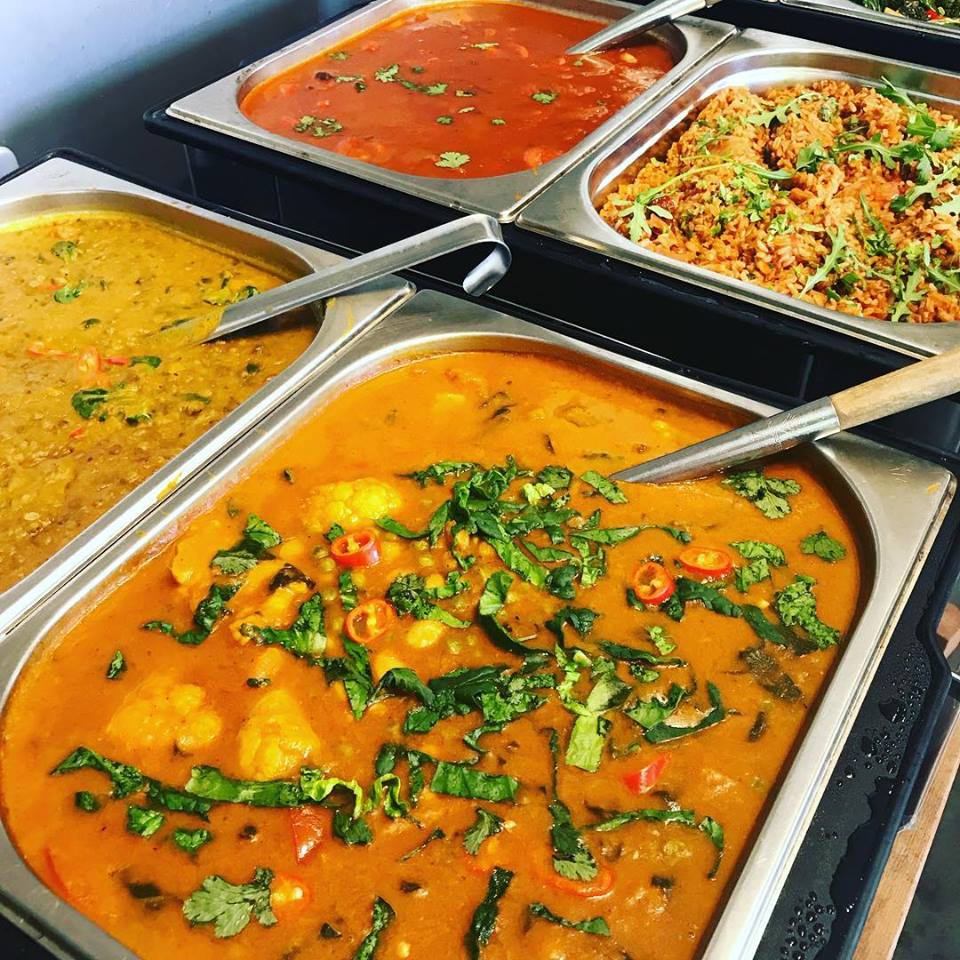 With a 360% increase in British people adopting plant-based eating in the last decade it is undeniable that the life style choice is becoming increasingly mainstream. While many restaurants, both independents and chains, are expanding their menus and even offering separate vegan menus, there is something special about going somewhere that provides exclusively vegan food. The extensive options available, the impossibility of cross contamination with non-vegan ingredients, and the emphasis on flavour and experimentation, are a handful of factors that entice vegans.

Natural Healthy Foods is one such place. Relatively new, having opened in its current location in March 2017, the eatery boasts of being completely vegan, gluten free and organic where possible. The eatery operates in a buffet style format that provides diners with the opportunity to try as much and as many dishes as they like, with their food weighed and payed for on this basis. For me at least, this flexibility is one of the features that makes Natural Healthy Foods stand out from other vegan eateries in Birmingham. It can often be overwhelming eating at exclusively vegetarian or vegan when you are not used to so many options being available that all sound equally delicious, and this option of choice solves that.

There was an interesting mix of cuisines, both hot and cold, including colourful salads, Mediterranean pasta dishes and Indian curries.

Located on Suffolk Street, Natural Healthy Foods is a short five-minute walk from New Street Station in the direction of the Mailbox. Despite being tucked away in a slightly undesirable location next to a main road, the eatery manages to create an atmosphere of relaxation, aided by the large windows permitting natural light and the minimal internal décor of stone and light wood.

Upon entering I identified numerous clear signs that explained how the buffet process worked, and my companion and I were also welcomed and directed to the seating area by an attentive member of staff. Despite it being lunchtime on a Saturday it was not too busy when we first arrived, and we were easily able to take our time choosing which foods to try. There was an interesting mix of cuisines, both hot and cold, including colourful salads, Mediterranean pasta dishes and Indian curries. An extensive drinks menu included loose teas, stored in labelled jars above the counter, smoothies (far from your average two-fruit combination) and coffees with which there was the choice of four different milks: oat, soya, almond or coconut.

Spoiled for choice, I decided on the four dishes of beetroot and puy lentil salad, fusilli with aubergine and olives, Sri Lankan Dhal curry and cauliflower cheese. Despite the slightly unusual combination I found that they each complemented the others well and all were seasoned well, bringing out new flavours. Indeed, the cooking of the beetroot had lightened its colour significantly, reducing the usual tanginess to a more subdued, subtle one. As a lover of dhal I can attest to how delicious their Sri Lankan one was. A seemingly simple dish bulked with lentils or other pulses, the success relies on the spices, and here their dhal is neither bland or uncomfortably spicy.

After much debate I chose the ferrero rocher cake that had hazelnut pieces on the top and base and a soft chocolate middle.

The stand out dish, however, was the incredibly creamy cauliflower cheese. As a vegan, cheese is the main thing I miss, and I know I am not alone with this craving. After a few vegan cheese disasters I was hesitant to get my hopes up again! But this recipe they have created is by far the best cheese sauce I have encountered. It was thick and actually creamy, a stark comparison to the runny, bland and sometimes almost inedible versions I have tried previously. Also, their version is more appealing as it is made from natural ingredients while many vegan cheeses are extremely processed and high in saturated fat.

Having spotted the desserts fridge upon entering I intentionally limited myself to less savoury foods so I could still enjoy something sweet. Again, it was a challenge to decide on just one of their raw desserts, with eleven on offer all looking equally indulgent. This included chocolate brownies, banoffee cheesecake, zesty matcha cheesecake and carrot cake to name but a few. After much debate I chose the ferrero rocher cake that had hazelnut pieces on the top and base and a soft chocolate middle. It was incredibly rich, so much so that I was unable to eat the slice myself and shared with my companion.

The quality of food at Natural Healthy Foods is exceptional, and with an ever-adapting menu as the chefs experiment with new combinations, you will not find yourself limited for choice. The company’s emphasis on healthy eating (no refined sugar!) need not put off those who have no desire to eat salad and the latest health trends. Instead, the food, prepared fresh on site, is extensive and flavoursome with salads that are colourful and varied. Although, if salad doesn’t entice, there are plenty of other options available to get your taste buds tingling.