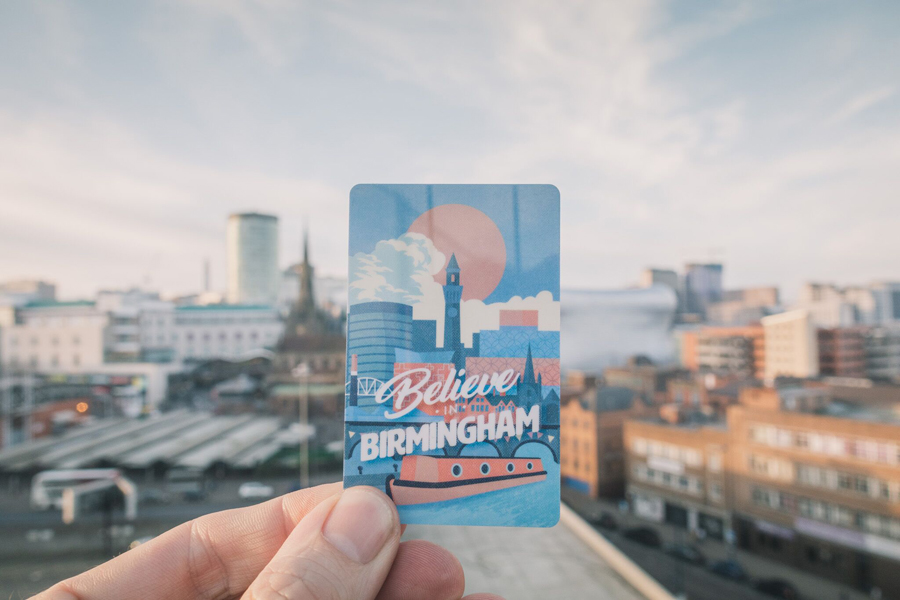 Every year Independent Birmingham commissions an incredible local artist to design their new Independent Birmingham Membership Card – with the vision being that the design must not only be a beautiful piece of artwork for your pocket, but also a unique piece that champions and celebrates the city. This year they teamed up with Lil & Brun (who design and illustrate wonderful prints for children’s rooms and nurseries) to create a design that emulates the vintage posters of yesteryear – and celebrates Birmingham for the truly incredible and iconic city it is.

It’s safe to say that we are very much head over heels with this new design, and the moment it arrives in the post you’ll be in love with it too.

More than just a discount card, Independent Birmingham is a movement, a revolution of local – and a way of giving back to the city in which we work and live. Not only is it a fantastic piece of artwork for your pocket (which just so happens to entitle you to amazing discounts and deals at over 110 of Birmingham’s very best independent cafes, bars, restaurants, theatres, pubs, cinemas and shops), the IBcard is your wallet’s best friend and your key to the city – allowing you to rediscover your city, one hidden gem at a time, and making you remember why you fell in love with Birmingham in the first place.

The new Independent Birmingham Membership Card is now available to purchase at a special (limited time only) price of just £12 (instead of £15) or at 2 for £18 (instead of £20) – meaning you can enjoy a whole year of incredible discounts at the very best independents in the city, for less than £1 a month!

The new IBcard is now available to purchase at: http://www.independent-birmingham.co.uk/our-card/

For a full list of all 110+ independents on the IBcard and their deals, categorised by area, visit: https://www.independent-birmingham.co.uk/blog/a-full-list-of-all-100-independents-offering-discounts-and-deals-on-the-ibcard-categorised-by-area/

For bulk purchase enquiries (the IBcard would make the perfect gift or reward for your team/employees), please email: hello@independent-birmingham.co.uk

Independent Birmingham began life in August 2013, acting as a guide that enabled those living and working in Birmingham to explore the city’s lesser-known aspects and unearth its best kept secrets.

In 2014, the Independent Birmingham Membership Card was released and is now owned by over 18,000 people eager to support and champion local, independent businesses. Since then Independent Birmingham has gone on to host massive food and drink festivals, held at iconic locations and attended by thousands of people – with many more great events to follow.

With a readership of 80,000-90,000 unique visitors a month and a highly-engaged social media platform of over 90,000 followers across Facebook, Twitter and Instagram – with mentions in national newspapers (The Guardian, The Independent), named by Twitter UK as one to follow to discover Birmingham, named by The Birmingham Post as one of the 250 most influential people in the region, and named as one of Birmingham Live’s 30 Under 30 – Independent Birmingham has helped pave the way for new independent businesses to blossom in the city and championed a revolution of local.

In the process of writing this love letter to Birmingham, Independent Birmingham created a whole platform for celebrating independent culture. Reigniting the fire for Birmingham independence and helping people to rediscover their city, one hidden gem at a time.