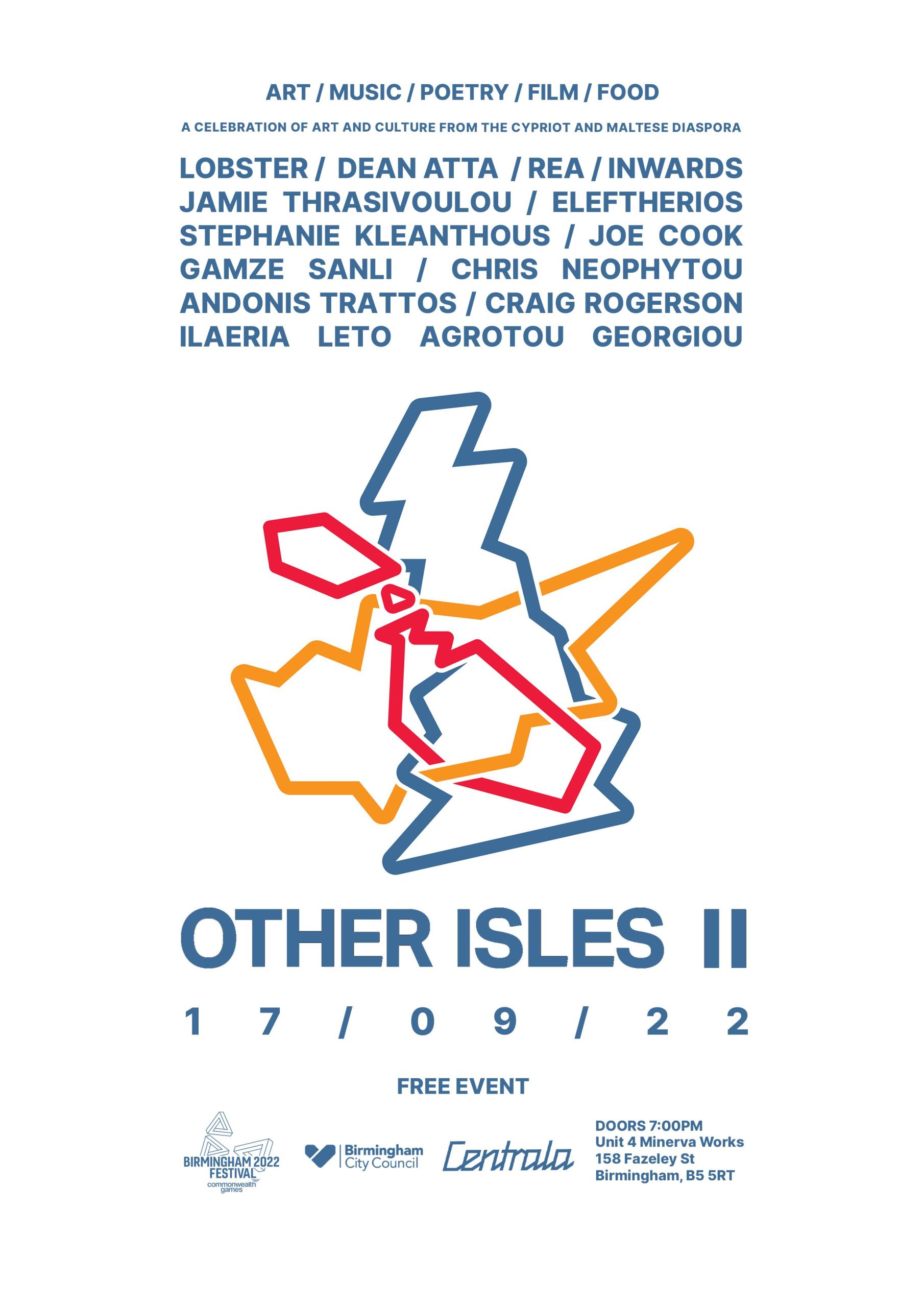 Other Isles is a celebration of creatives, artists and culture from the Cypriot and Maltese diaspora. After the success of the first Other Isles event at The Midlands Greek & Cypriot Association in Erdington. Other Isles have been generously offered the chance to put on a follow up event through Birmingham 2022 Festival. Other Isles II will take place on Saturday 17th September at Centrala, Digbeth

Cyprus and Malta, two tiny island nations in the Mediterranean are the only two European countries outside of the home nations to be members of the Commonwealth. Event organisers Joe Cook (British, Irish, Maltese) and Chris Neophytou (British, Greek Cypriot) want to shine a light on their famille’s islands with an emphasis on what artists are creating today rather than being stuck in traditions of the past.

The name ‘Other Isles’ comes from the fact that most Cypriot and Maltese often come under the ‘White Other’ category. This grey area of identity is constantly evolving and shifting across both nations.

Other Isles has been able to support collaborations from artists from both communities showcasing specially commissioned pieces to be screened on the night. These include a short film by award winning editor Andonis Trattos with a score composed by British-Maltese musician Craig Rogerson and music and visuals by Maltese rapper and activist REA and Turkish-Cypriot musician and creative Gamze.

Other Isles will also be giving away a zine featuring work, writing and recipes from members of the Maltese and Cypriot community. Featuring work of performers on the night as well as critically acclaimed writer Jen Calleja, musician and Cypriot music historian Cahit Asova, food recipes from Paul Sultanna and writing on indenity from Daneil Theophanous.

Other Isles invites people from all backgrounds and nationalities to experience a unique evening of live art and international collaborations. This is free entry event but tickets can be booked via eventbrite https://www.eventbrite.co.uk/e/other-isles-2-tickets-400634076307 you can turn up without a ticket. Doors open at 7pm.

As well as the main event we will be hosting a free online Maltese language workshop on zoom with Donna Borg. Donna is a champion of Maltese language and culture and has students all around the world learning this unique language.

Book your place for the workshop via eventbrite here: https://www.eventbrite.co.uk/e/other-isles-2-free-maltese-language-workshop-with-donna-borg-online-tickets-417440093557?fbclid=IwAR2jvOZcwnZzdUSSyWnNlkYYfGiwDLldw4oYmZTn7vjGP95qJOHURUuGeIE