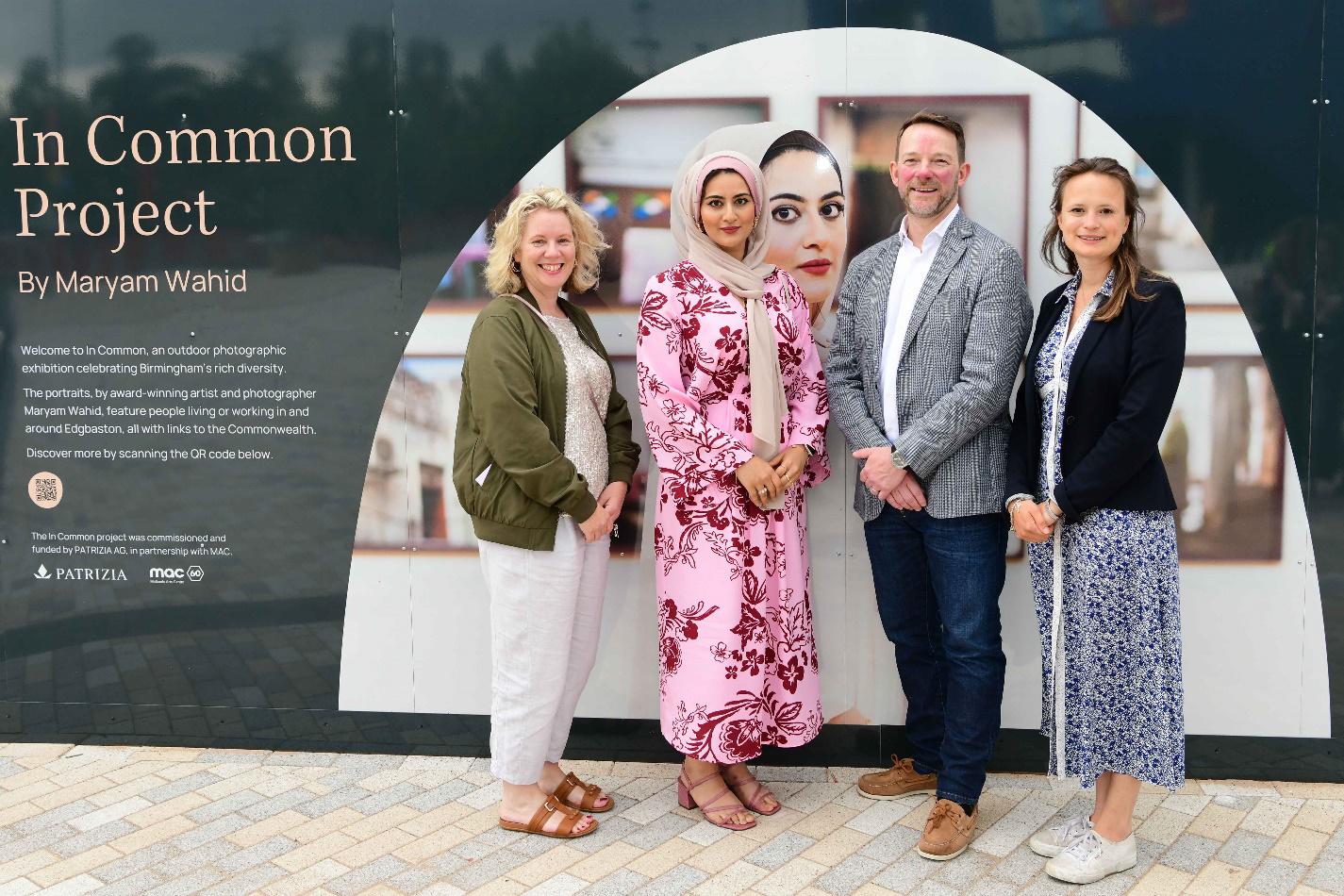 Thirteen people who live or work in Edgbaston are the stars of a new outdoor portrait exhibition called In Common, by award-winning Birmingham photographer Maryam Wahid.

Sitting opposite the entrance to Edgbaston Stadium, the spectacular 70m long photographic gallery celebrates the vibrancy, culture and heritage of the local community.

The sitters were selected following a public call-out organised by the Midlands Arts Centre (MAC), who partnered with PATRIZIA to deliver the project. As well as living or working in Edgbaston, each of the sitters – who range in age from 7 to -67 – shares a Commonwealth heritage.

Among them is Errol Simms, who left Jamaica – where he forged his love of cricket – aged 13. He now heads Warwickshire CC’s Cricket School. Mica Warner, whose grandparents were part of the ‘Windrush’ generation, works in the international marketing team at Aston University.

Performer Clint Lesch felt he had exhausted his career pathway in his homeland of South Africa. Now he teaches a new generation of performing artists in Birmingham.

The cultural project was commissioned by PATRIZIA, a global real asset investment manager and owner and developer of the Corkfield residential development. The scheme, which fronts Edgbaston Road and Pershore Road, comprises 375 new apartments for rent. Currently under construction, the homes will be available at the end of 2023. 15,000 sq ft of new retail and leisure space is also being built next to Warwickshire County Cricket Club’s new entrance plaza. Olivia Seaton, asset manager at PATRIZIA, said: “We have been struck by the vibrancy and diversity of Edgbaston and wider Birmingham and wanted to celebrate this. In Common has provided this opportunity and it has been so inspiring to engage with some of the local heroes.

“As well as supporting Maryam, a local artist living just a stone’s throw from the site, it has been great to collaborate with MAC, which is the cultural heartbeat of Edgbaston and is a fabulous facility right on Corkfield’s doorstep.”

Maryam Wahid was born in Birmingham. Her work has won her many accolades and fans, including the Duchess of Cambridge, who Maryam was invited to join as a judge for the National Portrait Gallery’s ‘Hold Still’ photography project, which documented life during lockdown.

As a British Pakistani, she too has a Commonwealth heritage.

She said: “It was a huge privilege to work with PATRIZIA and MAC and learn how the sitters came to be on these shores and how they are contributing to society today. It is such a thrill to see their portraits in large scale in this outdoor exhibition.”

Deborah Kermode, MAC CEO and Artistic Director, said: “We are thrilled to partner with PATRIZIA, our new neighbours, to commission In Common, and once again work with talented artist Maryam Wahid. The outdoor exhibition celebrates people in our local neighbourhood and their personal stories – from care workers, to educators, to sportspeople – who all contribute to making Birmingham a thriving city. These giant portraits greet you as you arrive at Edgbaston Stadium – you can’t miss them!

In Common is free to view and runs from 27 June – Autumn 2023. Visitors can interact with the exhibition and find out more about each of the sitters by scanning a QR code.,

In addition to the 375 apartments for rent, which range from studios to three-bedroom family homes, Corkfield boasts a range of amenities. These include a private lounge and dining room, co-working space and wellness facilities, including exercise studios, a communal roof terrace and private podium gardens. A programme of activities, organised by the building’s operator, will also be available to the 700 residents living at the development.

For more information on the In Common exhibition, visit: www.macbirmingham.co.uk and www.corkfield.co.uk/incommon.