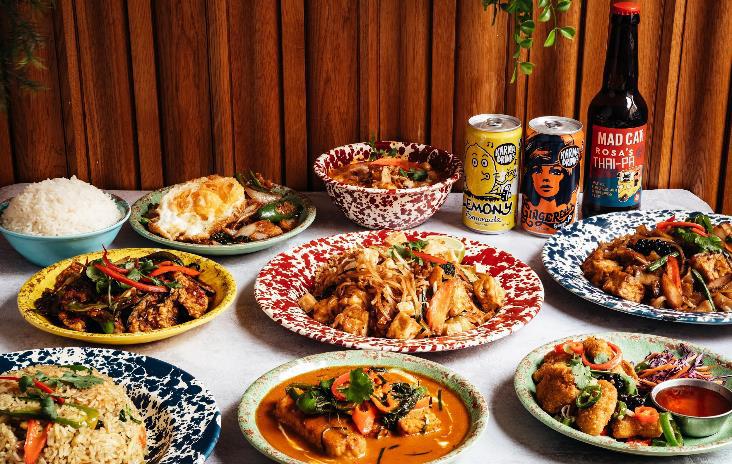 Rosa’s Thai Veggie first launched as a three month-long vegetarian-only pop-up at their Dean Street Soho restaurant, and the decision to extend the brand into Birmingham is a response to the increased demand for vegetarian and vegan dishes seen across the UK and in Birmingham.

Initially launched in London Fields in March 2021, Rosa’s Thai Veggie will be available for home delivery exclusively through Deliveroo and for takeaway via click and collect service from Rosa’s Thai Cafe Birmingham, centrally located at Two Chamberlain Square from Friday 30th July.

Although running alongside the current Rosa’s Thai Cafe delivery option, Rosa’s Thai Veggie is a separate offering, and the brand has ambitions to expand to further cloud kitchens and explore bricks and mortar opportunities for the concept down the line.

The menu also includes THIS Isn’t Chicken dishes, from pad thai to salt and pepper poppers and green curry fried rice, which were first introduced as limited-edition specials at Rosa’s Thai Cafe and, by popular demand, have found a permanent home at Rosa’s Thai Veggie. These sit alongside an all-new THIS Isn’t Chicken chilli basil stir-fry, served street food-style with a fried egg for a plant-based twist on a Rosa’s customer favourite.

Growing up meat was a bit of a luxury for us – we ate a lot of vegetables and if we did eat meat it was locally farmed. I’m pleased to see a trend of more and more people trying to eat a plant-based diet and am happy to be able to offer some amazing vegan and vegetarian Thai dishes, still true to my family recipes, but with a couple of small changes so more people can enjoy them!

We’re delighted to launch Rosa’s Thai Veggie on Deliveroo and click and collect in Birmingham. Saiphin has created so many incredible vegetarian and vegan dishes, so it’s really exciting to be able to introduce them to the city and show our customers, just how delicious veggie Thai food can be!

Alongside the current Rosa’s Thai delivery offering, sister-brand Rosa’s Thai Veggie is available for delivery exclusively on Deliveroo and takeaway via click and collect from Rosa’s Thai Cafe Birmingham.