Saturday Night Fever at The Alex review by Mazzy Snape 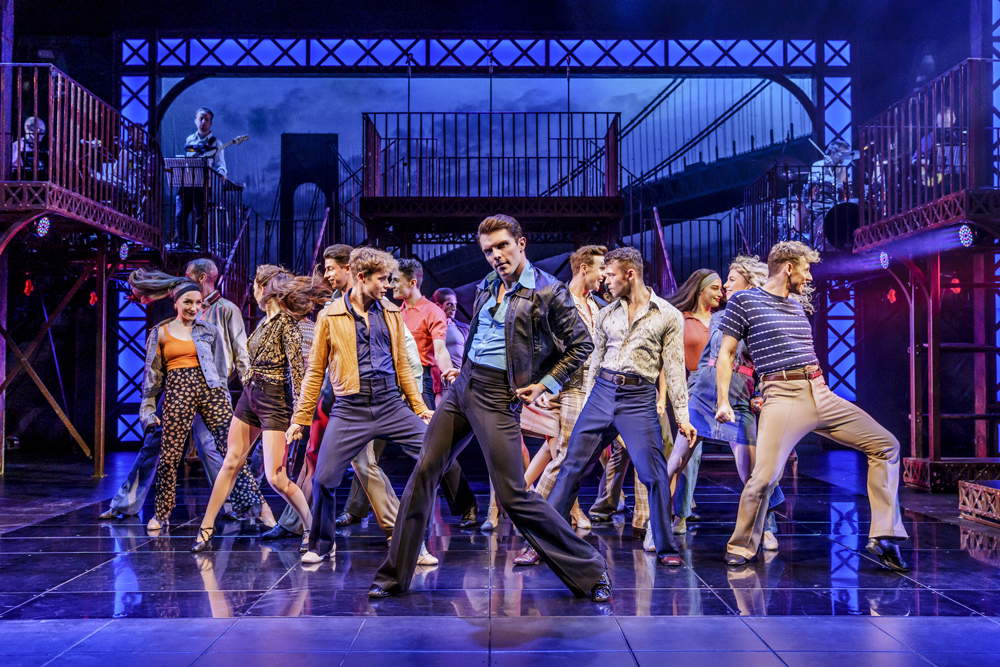 Saturday Night Fever, thestage musical, is a homage to the 1977 Robert Stigwood film in which John Travolta stars in possibly his most career defining role.

The stage show, like the film, depicts a coming of age story for our young protagonist, Italian Brooklyn born, working-class Tony Manero.

As someone who is passionate about music, and cannot resist a bit of the old D.I.S.C.O, the original film is one that I hold very dear. Not only does it possess one of the most incredible (and bestselling) soundtracks of all time, but it’s an engaging and at times gritty story which shows Tony growing up, learning some hard lessons and letting off steam on the dancefloor at his local disco night club.

The show is absolutely jam-packed with incredible music, jaw-dropping dancing and choreography, great costumes and like the film, some quite dark moments. I was uncertain how they’d bring in those more serious elements that the film highlights so well. One minute we’re pumped up from high energy dancing and music, the next minute we were facing domestic abuse or suicide. However, it was all handled deftly and the rollercoaster ride of the show was just as heady as the film, if a little cheekier. I know those squealing ladies a few rows in front of me will know what I mean. A touch of sex appeal, and a heap of sass.

THE BEE GEES, are positioned atop a balcony like the gods they are singing all these incredible songs impeccably! I thought someone had stuck a CD on at first!

Now, let’s talk about the music. The soundtrack included, deep breath.. “Night Fever”, “Tragedy”, “More Than A Woman”, “Jive Talkin”, “Stayin Alive”, “How Deep Is Your Love”, “Disco Inferno” AND MORE. Wow. Oh, and I certainly cannot fail to mention the majestic gold-lamé clad kings of disco, THE BEE GEES, are positioned atop a balcony like the gods they are singing all these incredible songs impeccably! I thought someone had stuck a CD on at first! Great band too. All day today I’ve been putting on a fake falsetto and singing ‘Night Fever’, ALL day. I’m sure that hasn’t been annoying at all for my work colleagues. I need these ‘Bee Gees’ in my life right now and have already made failed attempts to book them for another event. They were that good! Played by Al Jenks (Barry Gibb), Oliver Thomson (Robin Gibb) and Drew Ferry (Maurice Gibb).

The dancing, oh the dancing. I didn’t know legs could go that high when you were on the move. Colour me impressed. Yes, the level of dancing in the show was mind-blowing, some serious triple threats in this company. Particularly the main man Jack Wilcox (Tony Manero) and his dancing partner Rebkah Bryant (Stephanie). Acting wise everyone was great but newcomer Harry Goodson-Bevan, who played Bobbie C cleverly negotiated the transition of fun to tragedy and shone with a heartfelt authenticity. ‘He’ll go far’ as they say.

The costumes! Well, these are not costumes to me as a vintage lover, but the kind of clothes that I wear at the weekend. OK not the white suit. I was eyeballing every stitch, I also pointed out multiple shirts that I’d like my boyfriend to wear. Will these go on sale after? Genuine question.

So now a confession! I’ve seen this show before, years ago, and I loved it so much I wanted more more more…. Yes I’ve got the fever! I also can confirm it’s just as good if not better the second time around!