Home » What's on » Seven Sins will be showcasing the work of Cola as part of Digbeth First Friday!

Seven Sins will be showcasing the work of Cola as part of Digbeth First Friday! 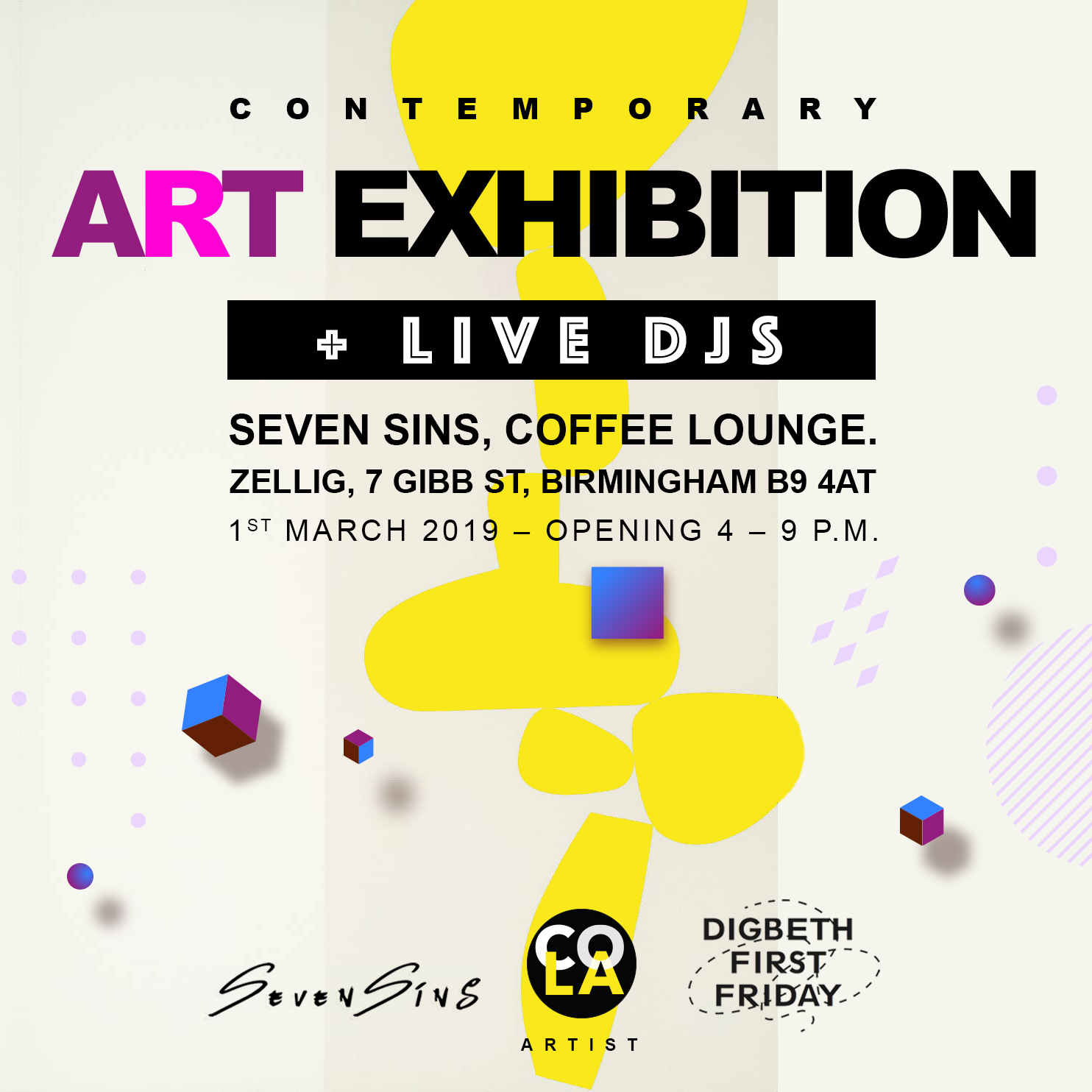 On Friday 1st of March, Seven Sins will be showcasing the work of Cola as part of Digbeth First Friday. Along with the contemporary exhibit, we will also be featuring live music from the artist himself, as well as providing a range of drinks and refreshments including our signature coffee inspired cocktails.

The venue: Seven Sins is a specialty coffee shop in the heart of Digbeth, focusing heavily on design and atmosphere; creating a space that inspires and evokes feelings of home. We pride ourselves on supporting and showcasing the work of local artists and are extremely excited to be a part of this event.

The exhibit will run from 4pm until 9pm.

COLA is a painter and a designer, born April 3rd, 1974 in Paris, France. Since he originally studied a career in aeronautics, he spent most of his life traveling. Due to this travels he discovered a true passion for the art world. His first drawings were made in the sky but finally landed on a canvas to fully express his emotions through the vibrant colours that define his style.

COLA´s esthetic is influenced by street art and modern movements. It manifests organic shapes and vibrant colours, as well as the impressions of his trips: looks, civilizations, cultures and struggles.

His first exhibition, “Some Lucid” was held in Costa Rica in July 2008. This show caught the attention of the French Ministry of Culture who invited him to hold a second exhibition at the French Alliance in 2009, named “Paths of Dreams”. This new show consisted of surrealist photomontages, printed on big scale canvas. The objective of these works was to create a parallel universe, in which reality mixed with dreams and immersed the viewer into an interior and colourful dream.

Later, in March 2010, he was invited as a visual artist/ speaker at the prestigious Pecha-Kucha world event. The works presented on this occasion explored in broad terms social issues that exist between each ethnic group, putting the public in front of the reality of our society.

This artist experimented with a wide range of subject’s matters, styles, and textures. All these components are characteristic of his work, which mixes different elements such as: humans, animals, symbols and sacred geometry (which, seeks to represent the mourning and the rebirth of our internal spirit as well as raise awareness of our daily struggles).

In 2010, he entered to La Sorbonne University in Paris, France, where he started a Fine Arts program that allowed him to continue developing his career and improving his visual concepts. During this period he explored different techniques as the dripping, the raster-dot and also the squeegee.

In 2017, his new solo show took place in Artflow Design Gallery, where he portrayed not only his colourful encounters during his travels but also the misunderstanding of human rights through his collection “COLONIAL”. This compilation of paintings portrayed the drama that some people lived or are still living, through colonialism. COLA, wanted to evince these situations, facilitating the understanding from the audience’s perspective.

“I do not try to change your way of thinking or perceiving life around us, instead I invite you to let your imagination and perception reveal what you want to see and feel. Through my Art, I want to share with you my observation of the world, its tensions, its wonders and its cultures”.