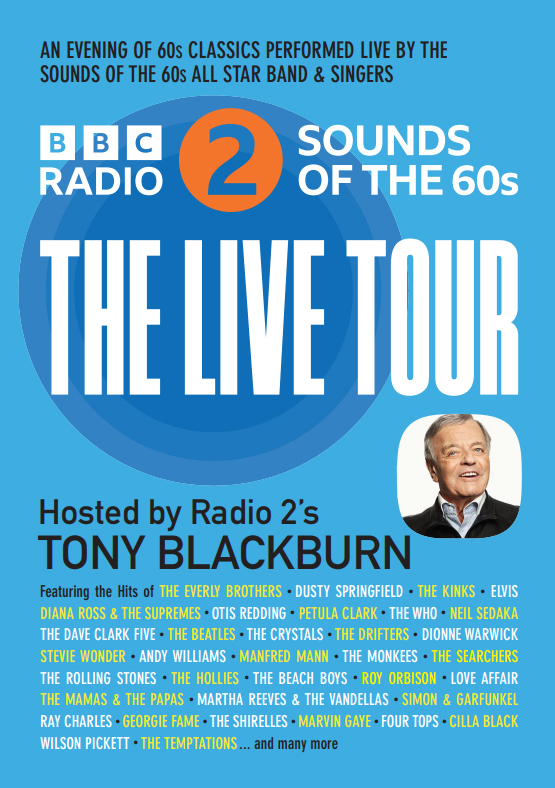 Every week,  listeners across the UK tune into BBC Radio 2 to hear the legendary Tony Blackburn  play the greatest songs of the 60’s. Now, the legendary DJ will be taking his Sounds of the 60’s show on the road, for a UK tour celebrating the music of this much-loved decade.

Featuring stories and songs from perhaps the most iconic 10 years in music, fashion and popular culture, the Sounds of the 60s tour will bring to life memories of the era.

The Sounds of the 60s All-Star Band and Singers will perform classic hits from the likes of Diana Ross & The Supremes, The Everly Brothers, Elvis, The Beatles, The Rolling Stones, The Beach Boys, The Drifters, Stevie Wonder, Marvin Gaye, and many more.

With next year marking the 60th anniversary of his first broadcast on pirate radio station Radio Caroline South in 1964, Tony Blackburn is remembered as a defining voice of the 1960s. His incredible career has seen him present on BBC Radio 1, Top of the Pops, and since 2017 he has presented Sounds of the 60’s on Radio 2, a hugely popular show on BBC Radio.

A champion in particular of Soul music throughout the 60’s, Tony has been recognised with 37 awards to his name including two Gold Awards for Outstanding Contribution to Radio, becoming the first person in history to receive two of these lifetime achievement awards. Tony is also recognised for becoming the first King of the Jungle in the original series of ITV’s I’m A Celebrity – Get Me Out Of Here.