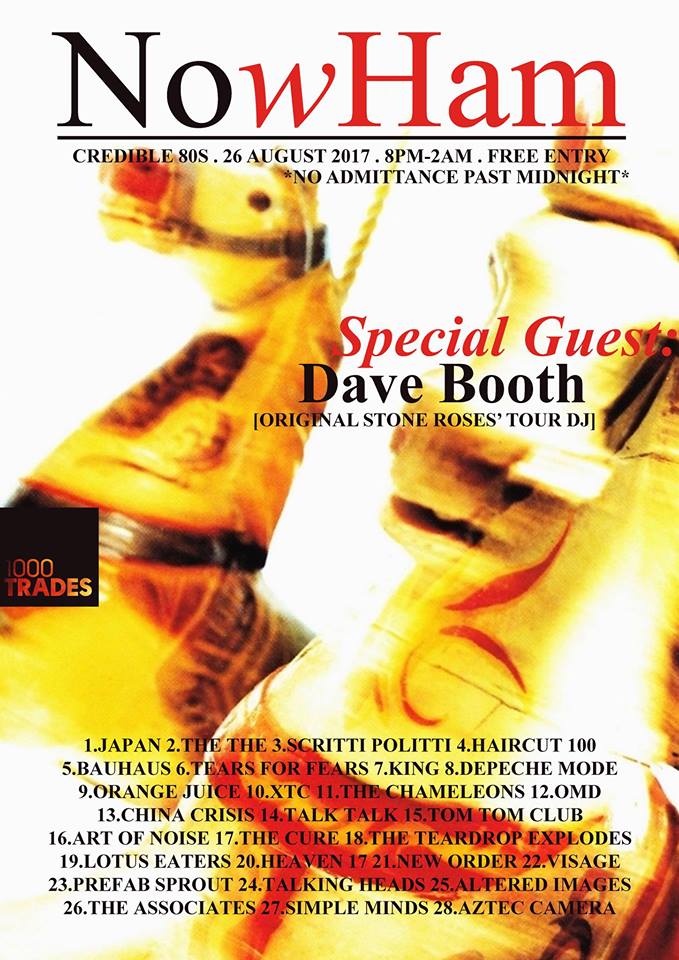 Legendary Mancunian and Stone Roses’ tour DJ Dave Booth returns to the decks for our monthly night full of proper music from the most underrated decade since the last one. We caught up with the man himself in advance of NowHam on Saturday 26th August.

Q: Dave Booth, thanks for joining us. Let’s start with an easy one for the uninitiated: What’s your musical heritage and where might people have heard you play before?

A: It all started in 1979. I was clubbing three nights a week in Pips legendary Roxy Room in Manchester, getting myself a DJ gig there a year before it closed. The next decade was spent at various clubs around Manchester such as Deville’s, Legend, Berlin, and the famous Hacienda. Since then I’ve travelled the country and even played Space in Ibiza.

Q: Wow – so it’s safe to say you’ve been around the block. And how many times have you played 1000 Trades?

A: Two times. Once in March and once in May, August will be my third time.

Q: Then we’ve still got a fair bit of catching up to do in Birmingham. We’ll get there. On Saturday 26th August you’ll be returning for NowHam. What can we expect?

A: Expect to hear a broad selection of credible 80’s tracks. All played on glorious vinyl, just how it should be. You can see my previous sets on the NowHam event pages.

Q: A strictly vinyl affair then. Does that mean you’ll be sailing down the M6 with a car full of 45’s on  Saturday afternoon?

A: Two huge LP boxes, 300 choice singles and a playlist to die for.

A: It’s the great sound system and the proximity to the crowd. Previous nights virtually ran themselves due to requests and I take pride in having ninety-nine percent of them. The crowd at 1000 Trades know their 80s.

Q: And if you had to pick one song from the set that will get people there, what would it be?

A: That’s a tough one. I think I’d have to go with The The ‘This Is The Day’ because it still sounds as fresh today as it did on its first play. I’ll let the crowd decide the rest though.

If you want to catch Dave Booth at 1000 Trades then This Is The Day to put in your diary: Saturday 26th August, music from 8pm. Event here!