Summer in the city 2017 by Sally W Jones 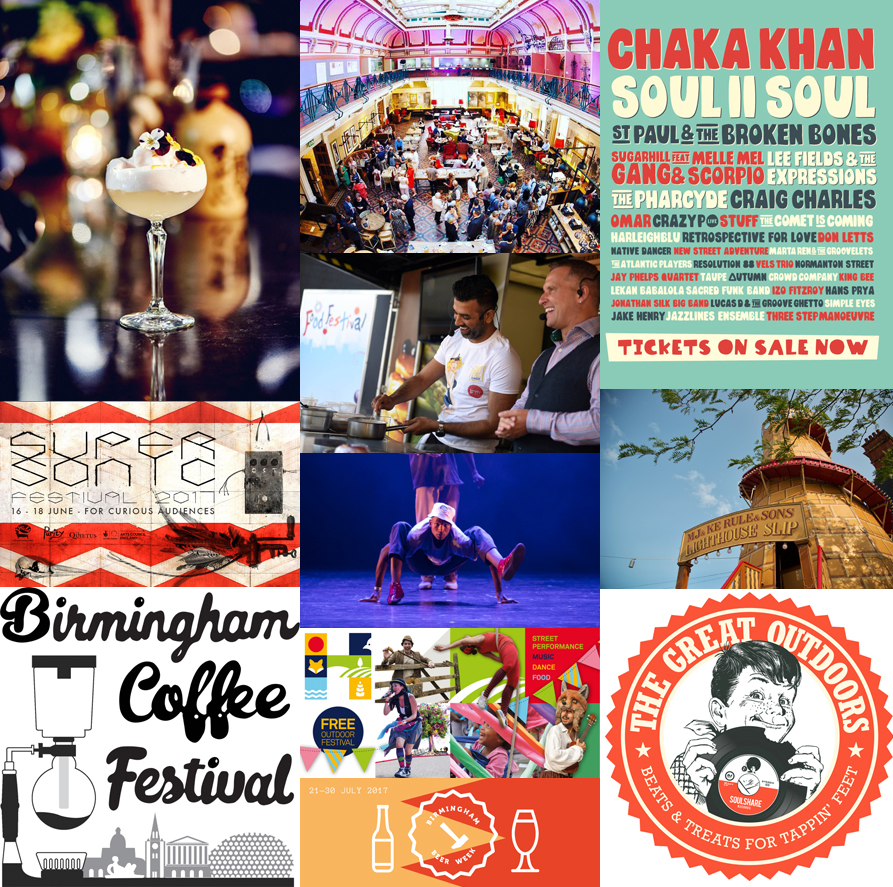 While we can’t vouch for the weather, summer is certainly shaping up to be a good one in Birmingham, with plenty of events including music, cycling, food and drink taking place across the city. There’s entertainment for the whole family as well as plenty of opportunities to adult with an eclectic series of food and drink festivals. Check out our round-up of the top 12 events taking place across Birmingham

Saturdays throughout the summer

The Great Outdoors runs throughout the summer months each and every Saturday at The Lord Clifden, Hockley. The weekly, outdoor, Al Fresco party starts your day/night with a host of DJs.

The Great Outdoors provides your sunshine soundtrack from 3pm every Saturday outback with a resident team of Dean ‘Sunshine’ Smith, Stu Robinson, Al MacKenzie, Emmy and Graham Smith as well as a whole host of more local DJ’s and friends.

There will be a once a month ‘out of town’ guest DJ invited down to the pub for a special monthly party. 3 bars / Food until 10pm / Ping Pong table, live sport on the screens / Saturday soundtrack.

The world’s biggest festival of hip hop dance theatre comes to The REP for the first time! The whole building will be transformed as the action spills off the stage for an unforgettable two-day celebration of hip hop.

The REP will house all things hip hop with dance workshops, graffiti displays, a film screening, poetry, DJs and free style sessions. These free daytime events are suitable for the whole family and mean that not only can you see Breakin’ Convention, but you can be a part of the festival too!

The evening shows are based around the best of hip hop dance both from around the world and just around the corner. Three of the world’s most exciting dance groups – Just Dance, the Soweto Skeleton Movers and Tentacle Tribe – will be performing on both days.

Cycle around the city free from cars on this family friendly bike ride. 5km of the roads around Birmingham will be closed, starting near the Town Hall in Victoria Square, taking in Broad Street and Five Ways. As well as the opportunity to ride without anyone trying to side swipe you while they snapchat themselves with a dog’s tongue, there are plenty of other activities to enjoy.

There’s an off-road BMX area for kids, a pop-up street velodrome and the chance to take the Sir Chris Hoy challenge and see what your sprint skills are like.

The event is free, register for your place on the website.

Taking place in the cultural hub of Digbeth in Birmingham, with a very special opening concert performance in the evening of Friday 16th June in the Grade I listed Town Hall, featuring Anna Von Hausswolff performing on the venue’s famous pipe organ. The pipe organ played a huge part on the Swedish singer/musician’s latest album The Miraculous (2015), and in forming the colossal sound that Anna Von Hausswolff has become known for. Expect drama, brooding drones, dreamy soundscapes and sublime storytelling.

The annual festival brings a bit of the countryside to the middle of the city, as Summer in Southside transforms a bit of Birmingham into an idyllic rural paradise. Celebrate the great outdoors with wildlife roams, enjoy the Village Green and check out a range of performances including a mash up of folk and street dance styles and live music.

There will be plenty for children, with lots of storytelling, a chance to create your own piece of cardboard countryside and an affable farmer who offers terrible advice (like most farmers, used to talking to potatoes).

This event is free.

Colmore Business District’s annual Food Festival is held in Victoria Square, Birmingham. The Festival is an integral part of the city’s cultural and culinary calendars.

The Food Festival is free to attend and allows the hospitality venues of the District to showcase their dishes and talents, giving visitors a flavour of what they offer all year round. All dishes are capped at £4, allowing festival goers to try plenty of fantastic options.

For two days this summer, the Birmingham Coffee Festival will bring together the top 40 independent coffee shops and coffee culture experiences from the local area and beyond. You can sample specialty coffee and food from all around the world. Whether you are a coffee drinker, enjoy the coffee shop experience, or own a store, there is something for everyone.

Here’s some of the independent exhibitors who’ll be at the festival:

The Mostly Jazz Festival covers soul, funk and jazz music. Crowds gather as the coolest of sounds drift into Moseley Village for a whole weekend of ‘fever in the funkhouse!’

There are also cocktail masterclasses and free tastings so you learn all about the spirit slowing pickling your liver in the most delightful manner.

Wristbands cost £10 and are on sale now.

The late July opening at the Edwardian Tearoom at BMAG coincides with Birmingham Cocktail Weekend as well as the Birmingham and Solihull Jazz & Blues Festival, so you can get a dose of culture with your booze. Check out Italian Jazz stars Pepper and the Jellies from 6:30 – 9pm, plus Birmingham Cocktail wristband holders can get their hands on the signature cocktail for £4. Open from 5-10pm, no reservations are required, but the Tearooms get busy so make sure you get in there quickly!

Birmingham’s craft beer scene has really exploded in the last year or so, with tap houses and indie breweries springing up all over the place, and what better way to celebrate than with a whole week dedicated to beer in Birmingham.

Venues involved will offering food, live music and of course EPIC beer. There are still names being added to the list but so far you can check out some great brews at The Wildcat Tap, Post Office Vaults, Cherry Reds, BrewDog, The Wolf Birmingham (no scrapping guys), Clink, The Dark Horse and The Village Moseley. Sign up for more news on the website.

The third annual festival of life in the JQ (that’s what the kids are calling it, yeah?) brings a range of entertainment and events for the whole family to the area in July. Check out the old-timey (hopefully not literally old) Helter Skelter, comedy from local superstar Barbara Nice, free heritage tours, a selection of street food and live music.

Find out what makes the Jewellery Quarter tick with the return of the JQ Open Studios, which sees artists opening their workshops and studios to the public. Check the website and Facebook page for more info and updates.

This event is free.

Article by by Sally Watson-Jones