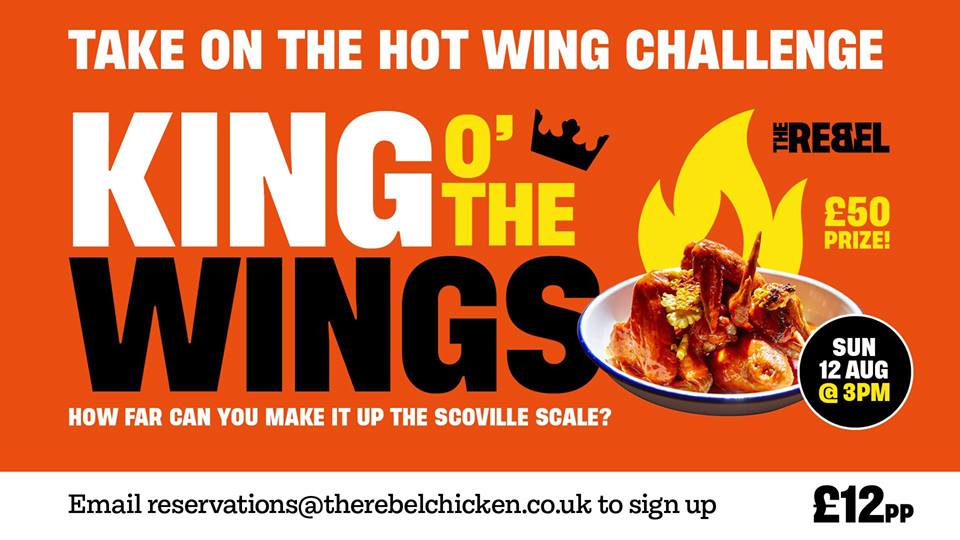 Take part in The Rebel’s Hot Wing Challenge to be crowned King O’ The Wings.

Can you handle the heat?

The Jewellery Quarter’s popular new rotisserie chicken restaurant, cocktail bar and beer garden are hosting their very own King O’ The Wings Challenge, where daring diners put their taste buds to the test to see far they can reach up the Scoville Scale.

On August 12th, chicken connoisseurs and hot sauce fanatics can head to The Rebel to prove they are the ultimate champion of heat in the King O’ The Wings competition. The heat is on as spice levels climb from the run of the mill hot wing to chicken drenched in Ghost Chilli and California Reaper sauce, with each round reaching higher and higher up the Scoville Scale. Some sauces hit around 9 million – to put that into perspective, a humble jalapeno hits around 2,500.

Those who withstand the heat and beat the rest are crowned King O’ The Wings, winning a prize of £50 and a T-shirt. There are two first place prizes up for grabs, with runners up bagging themselves a T-shirt.

The Rebel have become well known for their succulent rotisserie chicken – twice marinated, roasted on a spit over Sweet Cherry wood and coals imported all the way from Cuba. Quarter, half, or whole chicken are served with sides like roasted corn, spiced fries and a range of sauces including sweet BBQ and freshly made garlic aioli. Wraps, burgers, vegetarian options (and, of course) wings are also on offer in this new, but firmly established restaurant.

Brave dinner guests can reserve a spot for £12 by emailing reservations@therebelchicken.co.uk. Entrants arrive at 2pm for their gloves, bibs and to sign a disclaimer form before the competition starts at 3pm.