Showcasing the best of the capitals finest talent in music, arts, food and culture produced in partnership with Taste and Liquor and the Multi-Award Winning Shaanti, The Playground Feastival hits Birmingham, on Friday 28 August – Sunday 30 August 2015.

In a joint statement, Sharnita K Athwal from Shaanti and Manga Singh from Taste and Liquor say:

We’re extremely honoured to produce a new festival to Birmingham vibrant city of arts and culture. The Playground Festival, in association with Birmingham Hippodrome, is a celebration of Birmingham’s creative independence; it’s a chance for the community to engage with culture on the street for free. It’s also a chance to taste some the UK’s greatest street-food: celebrate, support and discover local arts, pop-up culture and hear some of the hottest artists of the future. We strive to produce independent programing to the City’s multi-cultural landscape and look forward for this festival to grow in 2016.

On Friday 28 August, The Playground Feastival will launch at The Arcadian Centre with an evening of music and street-food from Urban Turban, Jenny’s Jerk Chicken, Cariboue Poutine and Good Grub. While across the weekend the festival joins arms with Birmingham Hippodrome’s Summer in Southside for a weekend of high-quality acrobatics, dance, theatre, a strolling street band and a whole load of weird and wonderful surprises, with unusual sets and unusual settings. 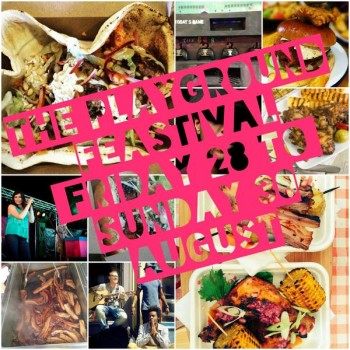 The Playground Festival will take over the whole of Hurst Street, for a full street closure, as they present The Playground Feast, featuring exciting global street-food traders and chefs like, Camp Cooks, Press De Cuba, Southern Oven, The Indian Butcher, Bailey’s Caribbean, The Urban Turban, Jenny’s Jerk Chicken, Smoke in Spice and more.

For a club-festival experience head to The Beats Sound Soundsystem, headlined by some of the top DJ’s from the underground – dance club scene alongside special live PA’s throughout the day. The Beat’s Sound System are also excited to present Pegdoll Record Label Music Showcase.

If you’re into Pacman or Street-Fighter visit The Play Time Zone where you’ll find old skool Retro Arcade Games provided by Joy Pads or for treats for the family head towards The Playground’s Tuck Shop on Inge Street, as it will be transformed into an open market full of sweets, cakes, ice-cream stalls, a mocktail bar, street-wear and vintage shops and plenty of interactive games celebrating the playground’s theme.

For a beats explosion the Award Winning Beatfreeks and InUnity present BACE! a collective of musicians, poets, dancers and media makers to give you an hour of creativity unleashed while The First Network, a new voice for the hottest new raw talent, will present an artist showcase to help to promote the stars of the future.

Taste and Liquor and Shaanti presents The Playground Festival

in association with Birmingham Hippodrome’s – Summer in Southside

Saturday – Sunday 10am til 9pm