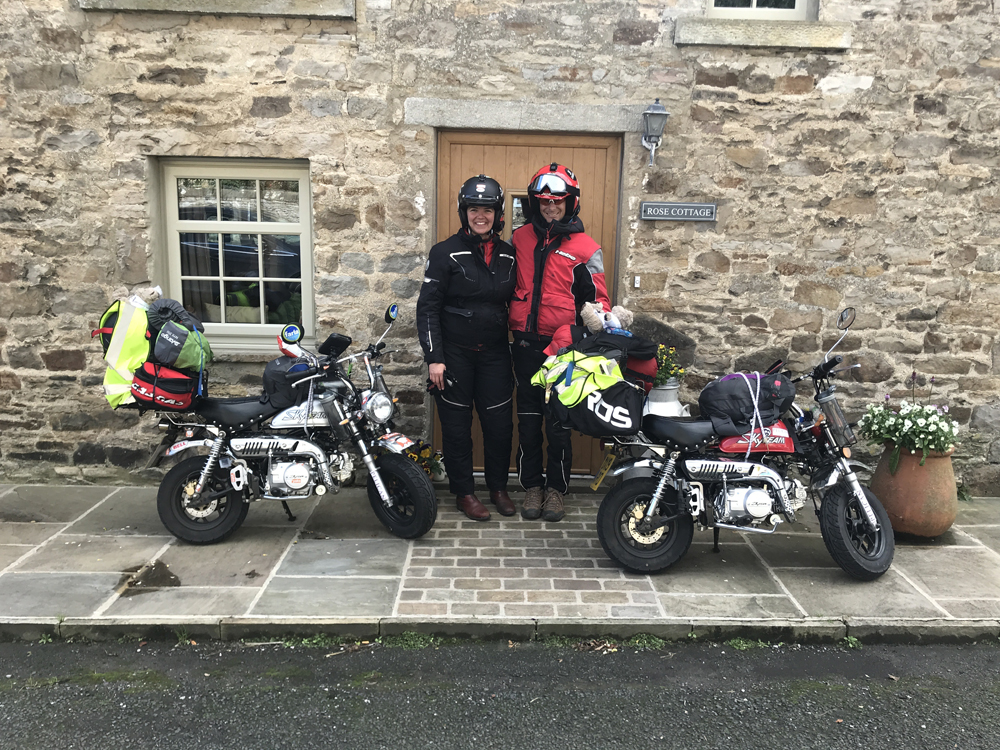 A terminal cancer survivor who was the world’s first person to receive a multivisceral organ transplant has completed a 2000-mile Monkey Bike challenge, raising almost £3000 for charity.

Adam Alderson, who underwent a gruelling operation to remove eight of his abdominal organs after contracting a rare form of terminal cancer, rode from Barcelona through Europe and across the sea to Wensleydale with his wife Laura, in a bid to raise the profile of organ transplant.

Sporting logos from supporters The Association for Perioperative Practice, and medical equipment supplied by sponsors Farla Medical, the couple covered around 200 miles per day on bikes which were designed only to reach a maximum speed of 35 mph.

Documenting their entire route on social media, the couple were able to raise a grand total of £2660.35 for a charity extremely close to their hearts, The Pelican Foundation.

The Pelican Foundation supports people with bowel, liver, prostate and bladder cancers by improving precision surgery. Their aim is to discover the most effective treatment for each individual patient, refining treatment options to achieve the best outcomes for patients’ survival and quality of life.

Pelican also develop training and communication of the latest procedures by delivering professional courses as well as leading research into pelvic cancer surgery and treatment.

In 2015, Adam was diagnosed with Pseudomyxoma Peritonei- a rare type of bowel cancer that begins in the appendix as a polyp, before bursting and spreading cancerous cells to the lining of the abdominal cavity.

The couple sought help from Professor Brendan Moran, consultant colorectal surgeon at Basingstoke Hospital and is on the board for the Pelican Foundation.

Adam underwent six months of chemotherapy and upon completion was referred to his local specialist palliative care team. At this time, surgeons confirmed they were sadly unable to remove the cancer with debulking surgery and chemotherapy treatment had been unsuccessful.

Lying on his deathbed and refusing to believe that it was the end, Adam demanded that his local care team of gastro surgeons referred him to Basingstoke and Hampshire Hospital, which is one of only two national specialist centres in the country treating Adam’s disease.

Commenting on his journey, Adam said: “I’ve always been stubborn, so being critically ill only fuelled that fire. To me, it just didn’t feel like it was supposed to be the end; I have a love for life and people I love in life so the fight was not over!

“Eventually, I convinced the team to call the surgeons at Basingstoke and ask for their opinion. I waited nervously to hear if a referral was possible, I remember hearing the nurse telling my consultant that they wanted me down there as soon as possible and an ambulance to transfer me was arranged.

“I always remember the moment I arrived and met Brendan, I knew this was my last chance at finding a way to save my life. Brendan is a kind softly spoken man who just made everything seem OK, however following scans and investigations it was confirmed the conventional surgery was not an option.

“Mr Moran however did inform us that they could attempt to perform a multivisceral transplant operation that would include the complete removal of my abdominal organs. He advised they would need to add me to the transplant list and wait for a suitable donor, during which time, I would need to be in the best condition possible to undergo the surgery.

“Six weeks later I was listed as ‘live’ on the donor list and only 32 hours later, the call arrived that a potential donor had been found.”

It took over 30 surgeons a total of 17 hours to perform the life-changing surgery, which at the time had only ever been attempted three times before, and sadly all the recipients had died following the operation.

Adam is now recognised as one of only nine people in the world to survive the surgery and is committed to living his best life in honour of his donor.

Adam added: “Every day I am thankful to my donor and her family for giving me a second chance at life, and I want to do as much as I can in her honour. That is why we decided to complete the Monkey Bike Challenge – just another addition to the list of crazy adventures we have done since my surgery.

“Not many people are aware of the condition that almost took my life, so one of my aims is to raise awareness across the world, not only of that condition, but also of the difference organ donation can make to a person’s life.”

In 2017 Adam and his wife had attempted a similar challenge – the Mongol Rally- but sadly Adam became critically ill and the pair had no choice but to be flown home to receive treatment.

Laura Alderson, Adam’s wife said: “We decided to take on the Mongol Rally challenge as an alternative honeymoon. During the challenge I kept a very close eye on Adam’s health as I knew that dehydration and infection were a high risk – not forgetting the everyday risk of rejection.


“Whilst crossing the desert in Kazakhstan four weeks into the challenge, Adam began suffering badly with dehydration despite consuming around eight to 10 litres of water per day. He had horrific back pain and had begun to become quite delirious due to the side effects.

“Following a discussion with his specialist team in Oxford, the decision was taken to return to the UK as soon as possible as Adam needed to be admitted back into The Churchill Hospital with suspected rejection.”


During Adam’s illness, Laura became a full-time carer for Adam, taking various courses to learn how to deliver palliative care at their home in Wensleydale.

Laura added: “During Adam’s illness I was determined to try and keep things as ‘normal’ as possible, especially whilst we were at home. I took the decision to learn about his illness, the side effects and the treatment options.

“It was important for me to understand and manage Adam’s symptoms without having to frequently call on the team. We were so exhausted too, the front door felt like a revolving door with people constantly coming in and out and we just needed some of our own space and control of the situation.”


Adam and Laura’s  determination to live a normal life offers comfort and hope for other patients who are beginning their journey through transplant and cancer treatment.

Since Adam entered recovery, the couple have launched their own fundraising group, Yorkshire Yaks, with the intention to continue supporting families coping with a terminal diagnosis and raising awareness of organ donation.

Adam now speaks at a variety of events, delivering inspirational accounts of his journey, and has recently been nominated for two Yorkshire Choice Awards; The Kate Granger Outstanding Contribution Award and the Inspirational Individual of the Year for his continued efforts.

To vote for Adam, or to find out more about their fundraising, please visit their Facebook Page, Yorkshire Yaks.