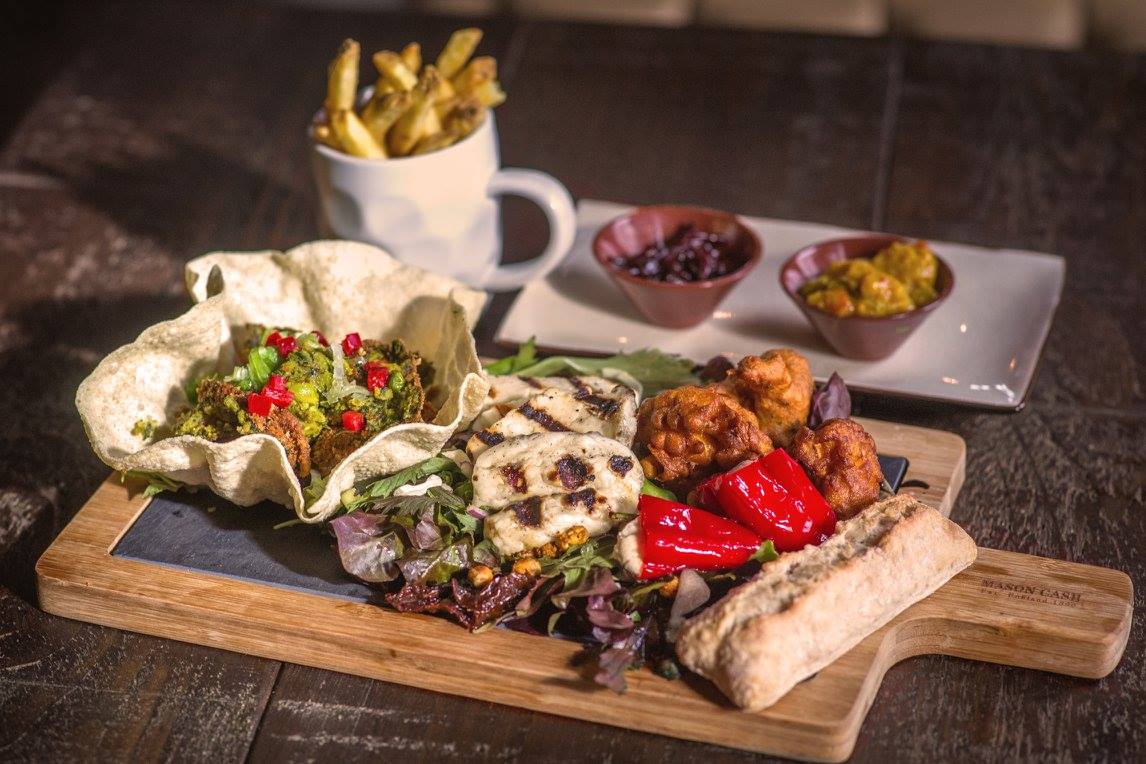 I was so excited to visit one of Birmingham’s oldest pubs, The Bulls Head, on a Saturday evening to try the food and drinks (specifically cocktails) on offer. The Bulls head had a refurb back in December, and I’d heard only lovely things about the decor, the service, and the environment; so my husband Marv and I made our way down Broad Street, and took a left just before the cinema onto Bishopsgate Street. The beautiful exterior, lovingly restored by Davenports provided a warm welcome before we were treated to an even warmer one at the bar once we’d stepped inside. We were then led to a cosy room at the back of the bar, where our menus sat on our table and we soaked up the chandelier, tiles, wallpaper, and fireplace (it was an Instagrammer’s dream).

Like all great trips to the pub; we started with the drinks menu. I ordered a Moonraker; a gin based delight with fresh raspberries and a decent kick as I sipped it. Marv went for Peaky Blinders Bulleit, and as a bourbon fan; he was not disappointed by the warming addition of ginger ale and fresh orange to one of his preferred spirits. Both cocktails were brought to our table with accompanying serviettes, straws, and fruity garnishes. Both drinks looked photo-ready, and tasted flavourful and not too sweet. There’s always a worry that a fruity cocktail means a sickly, sugary drink; however, these were well balanced and had plenty of strength in each sip (ok, slurp).

We had begun to choose our food before the drinks had even arrived and were looking forward to eating something from the Indian street food-inspired menu. The menu was full of pub favourites that all had a spicy twist and an attention to detail for the palette. I chose the Popcorn King Prawns, which arrived in a crispy poppadom on top of an Asian slaw. There was the addition of a minted cucumber and yogurt dip which was perfect for dipping my spicy deep-fried prawns into. At £6; I’d happily return to order this dish again as a light lunch. The starter had plenty of contrasting texture, and I couldn’t fault the flavour; the only issue was having to hit Marv’s hand away as he kept trying to sample (steal) my prawns. 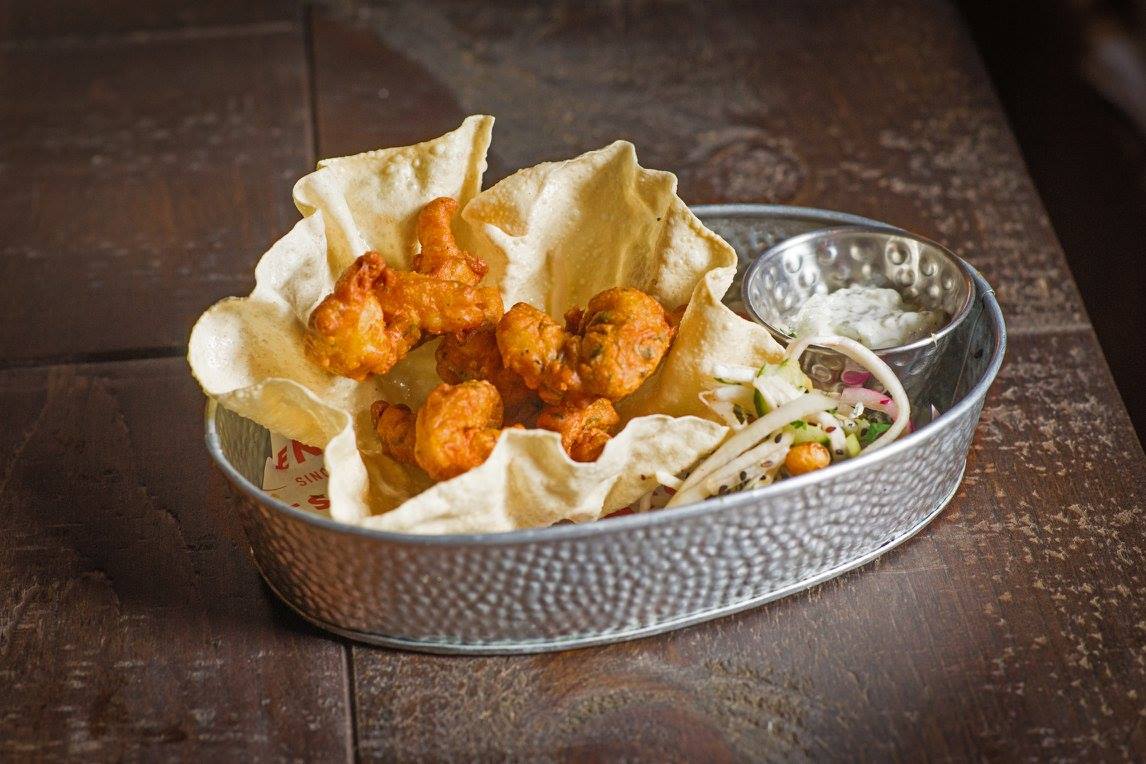 Marv went for The Bombay Bad Boy; another of the signature dishes on the menu and vegetarian. At £5, we expected a modest plate of food to arrive; however, a sizable tray was placed on our table, and Marv’s eyes lit up. A dish of masala spiced baked beans were topped by two perfectly fried eggs and were all accompanied by a few slices of chilli cheese toast (which I obviously sampled to replace my stolen prawns). We both decided that the Bad Boy would be our new go-to hangover meal; plenty of flavour wrapped in a tray of pure comfort food made for a delicious start to the night. There’s also no going back from Chilli cheese toast; I will be attempting to spruce up my efforts at home.

I wish more people were aware of this little gem that’s tucked away just off one of the busiest roads in Brum.

We were both impressed with the vegetarian selection on the menu; and picked the new Vegetarian Board to share for our main course. Originally I was going to try the Seafood Board and Marv was going for the veggie option; however, thank god we were told they were to share as we would have needed assistance getting up from the table if we’d had one each. Aside from being beautifully presented; the veggie board was packed full of flavour. I discovered a type of sun-dried tomatoes which I’d never tried before and I keep thinking about them, and the feta stuffed peppers were (my) mouth-sized, and were quickly devoured. There was also warm bread rolls and butter, a bed of dressed mixed salad leaves, deep fried halloumi, hand battered cauliflower pakora, and a poppadom which housed crumbed garden burger. As if that wasn’t enough, another tray made its way out of the kitchen, topped with fries and two pots of pickles which made great dips.

The service throughout our meal was so friendly; The Bulls Head is full of staff who are knowledgeable and passionate about the drinks and food they serve. I wish more people were aware of this little gem that’s tucked away just off one of the busiest roads in Brum. There’s plenty of character, a relaxed atmosphere, and a menu full of tasty food at a great price point. Both my husband and I will be returning to try more from the food menu and to order an El Pablo cocktail; so should you.