Home » What's on » The Comedy Get Down – Live In The UK for First Time!

The Comedy Get Down – Live In The UK for First Time! 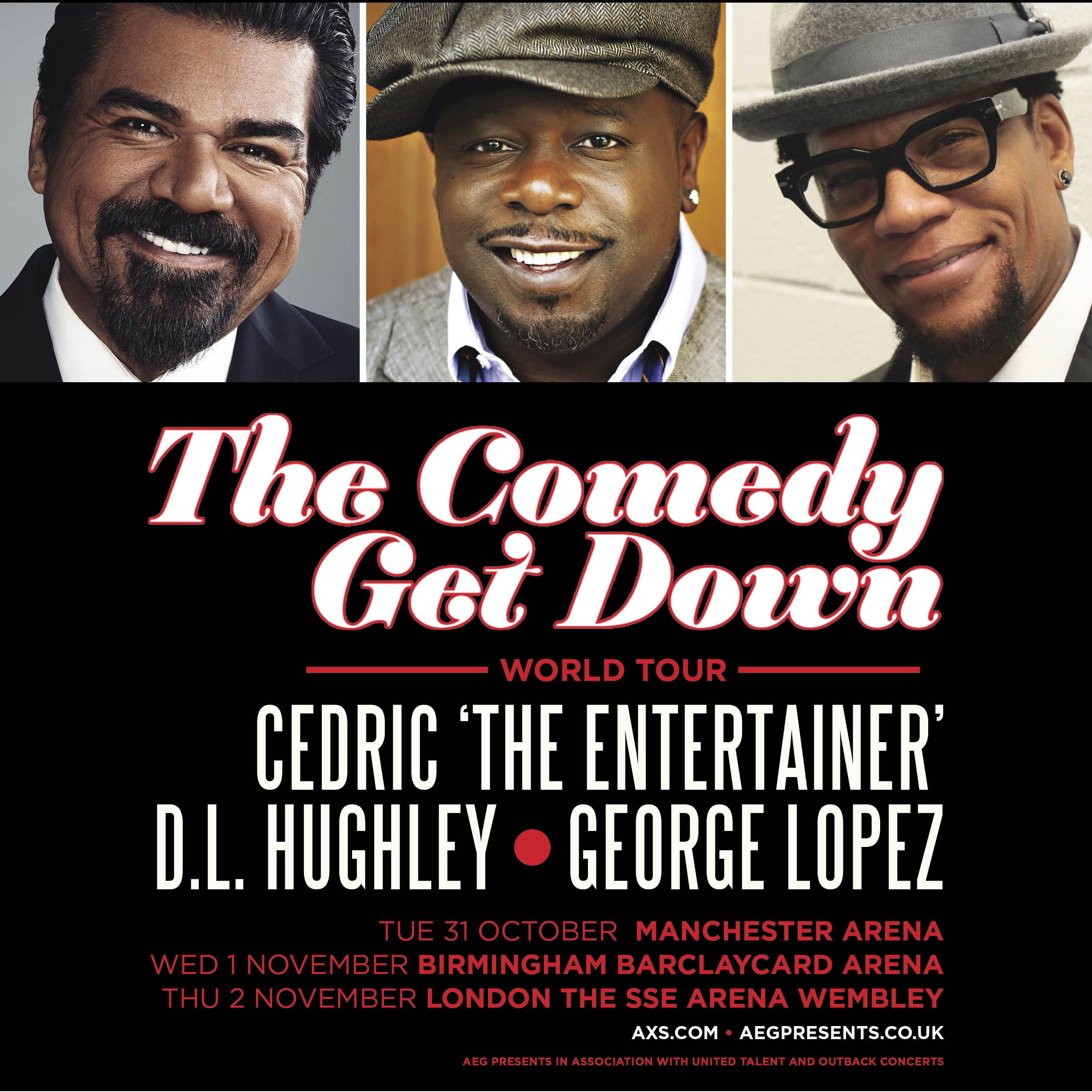 Following their massively successful US tour, pioneers of comedy, Cedric ‘The Entertainer’, DL Hughley and George Lopez will be heading to the UK for the first time for The Comedy Get Down.  An incredible opportunity to see these comedic legends take to the stage in the UK, tickets will be on general sale from Friday 28th 2017.

The side-splitting Comedy Get Down Tour lands in the UK at the end of October for a 3-date arena tour (Manchester, Birmingham and London). Undoubtedly, one of the funniest collectives around, these three will have you rolling in the aisles at what promises to be the comedy event of the year.

Bringing together these bone fide stars of the comedy circuit, Cedric the Entertainer, DL Hughley and George Lopez, The Comedy Get Down promises to be a riotously, hilarious show. Combining a wealth of comedic talent with more than 140 movies between them, not to mention stand-up shows and TV sitcoms, this is truly a comedy dream-team…and they are coming to our shores.

CEDRIC ‘THE ENTERTAINER’ is best known for his many acclaimed performances in hit films such as Babershop, Be Cool with John Travolta, Intolerable Cruelty with George Clooney, Johnson Family Vacation (the 2004 box office hit in which Cedric was both the star and producer), and The Original Kings of Comedy (MTV’S phenomenally successful documentary feature directed by Spike Lee), to name just a few, as well as displaying tremendous vocal talent in the family features Madagascar 2, Charlotte’s Web, Dr Doolittle 2 and Ice Age.

His first comedy book Grown-Ass Man released in 2002 was a best-seller and commemorated his infamous catch phrase.

Cedric’s universal appeal, versatility, and tremendous career successes spanning television, live performances, and film have solidified his standing as one of the premier entertainers in the world, winning him numerous awards and accolades for his film & television roles, which include The AFTRA Award of Excellence in Television Programming for his Fox Television series “Cedric the Entertainer Presents…”.  He has won a record-breaking four consecutive NAACP Image Awards for “Outstanding Supporting Actor in a Comedy Series” for his portrayal of the lovable “Coach Cedric Robinson” on the WB’s #1-rated The Steve Harvey Show, which ran for six seasons.

One of his personal favourite honours was his win of The Richard Pryor Comic of the Year Award from Black Entertainment Television in 1994. And, in 2001, USA Today dubbed him “Madison Avenue’s Most Valuable Player” for starring in the #1 ranked Super Bowl commercial for Bud Light.

DL HUGHLEY star of his namesake TV show, The Hughleys, is also well known as one of the standout comedians on the hit comedy tour and docu-film The Original Kings of Comedy.   DL is a household name as host of his own nationally syndicated afternoon radio show The DL Hughley Show, which is heard in over 60 markets across the U.S.

Hughley is a published author, including his best-seller Black Man, White House: An Oral History of the Obama Years.  He was honoured with a prestigious Peabody Award for his satirical documentary special DL Hughley: The Endangered List, which earned him wide critical commendation.  Among his many TV appearances, Hughley appeared in the TV drama Studio 60 on the Sunset Strip and starred in the NBC drama Heartbreakers.

Like Cedric, Lopez has also voiced many characters in a string of animated blockbuster films including Rio and Rio 2 along with Jamie Foxx, Anne Hathaway and Jesse Eisenberg, Escape from Planet Earth opposite Jane Lynch and Sofia Vergara, The Smurfs 1 and 2, and The Beverly Hills Chihuahua 1, 2, and 3.  His other most recent film credits include the box-office hit Valentine’s Day, Swing Vote, Henry Poole Is Here and Balls of Fury.

In 2015, Lopez was seen in the Lionsgate inspirational drama, Spare Parts.  Produced by Lopez, the film is based on a true story about four undocumented Mexican-American teenagers from Phoenix who team up to build an underwater robot that wins the national robotics competition.  In 2014, Lopez starred in the multi-camera ensemble comedy Saint George on FX, which he co-created.

An acclaimed author, in 2013, Lopez released his second memoir, I’m Not Gonna Lie And Other Lies You Tell When You Turn 50, where he tells the unabashed and hilarious truth about aging – as only he can.

In 2006, Lopez was recognised with a highly coveted star on the Hollywood Walk of Fame. In addition, Time magazine named him one of the 25 Most Influential Hispanics in America.

Tickets for The Comedy Get Down, starring Cedric ‘The Entertainer’, DL Hughley and George Lopez, will be on sale from 9am Friday 28th July.  Tickets available from: www.aegpresents.co.uk.

THE COMEDY GET DOWN