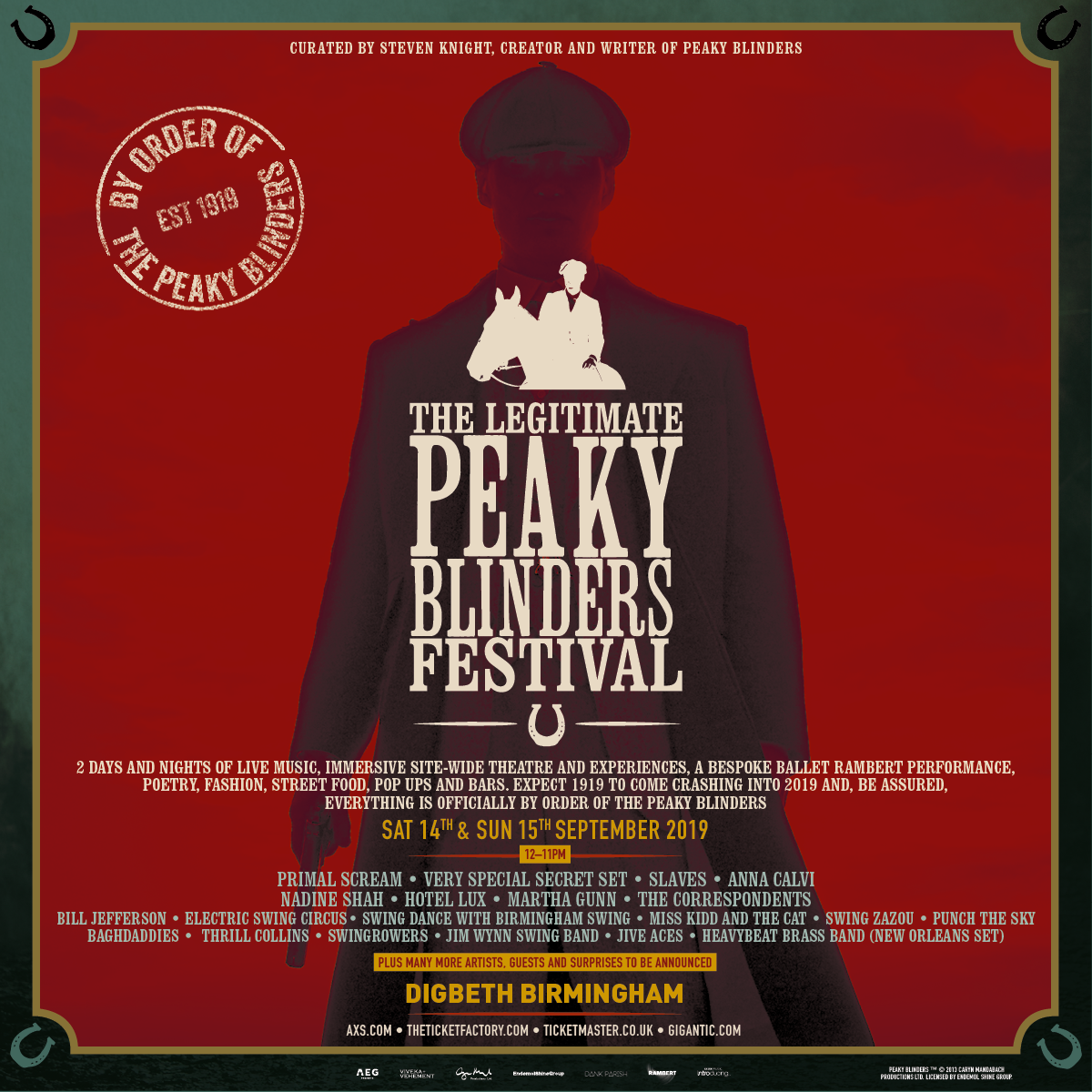 An incredible, official celebration of the global TV phenomenon

Q&As with show creator Steven Knight, debates on the history, politics and social themes of Series 5

On September 14th and 15th, Birmingham celebrates the television show that has catapulted its history to a global audience. Now, the show’s creator, stars, famous fans and its home city come together to create a spectacular, immersive and ‘legitimate’ event in its honour.

Artists confirmed across the weekend include Primal Scream,Anna Calvi,Slaves,Nadine Shah, a BBC Introducing Stage and a host of excellent music performances, reflecting one of the sharpest soundtracks on television.

Martin Coat, the creative mind behind Boomtown and immersive theatre specialists Dank Parish, bring the world of Peaky Blinders to life, taking over the streets of Birmingham. Expect close up entertainment and immerse yourself in the underbelly of early 20th century Birmingham and all the high hitting drama of the Peaky Blinders world.

Steven Knight will reveal all in a live Q&A, also featuring the show’s stars.

In addition, there will be a fashion show from Steven Knight’s Garrison Tailors clothing range, plus the show’s influence on modern style will be reflected in onsite tailoring and men’s grooming.

“It is with enormous pleasure that I announce the first ever LEGITIMATE Peaky Blinders festival, which is happening in the streets and alleys of Digbeth, Birmingham on Saturday  14th and Sunday 15th of September.

It will be a festival of live music, performance, poetry, immersive theatre and experiences which will celebrate the swagger of the men and women who walked these same Digbeth streets one hundred years ago. Along with the music line up, we have the world-famous BALLET RAMBERT performing a specially written and choreographed Peaky Blinders ballet. There will be fashion shows, street food, pop ups and bars including a reimagined Garrison Tavern.

We will be celebrating in Birmingham style and everyone from around the world is invited.

Expect the unexpected, expect 1919 to come crashing into 2019 and, be assured, everything is officially by order of the Peaky Blinders…“