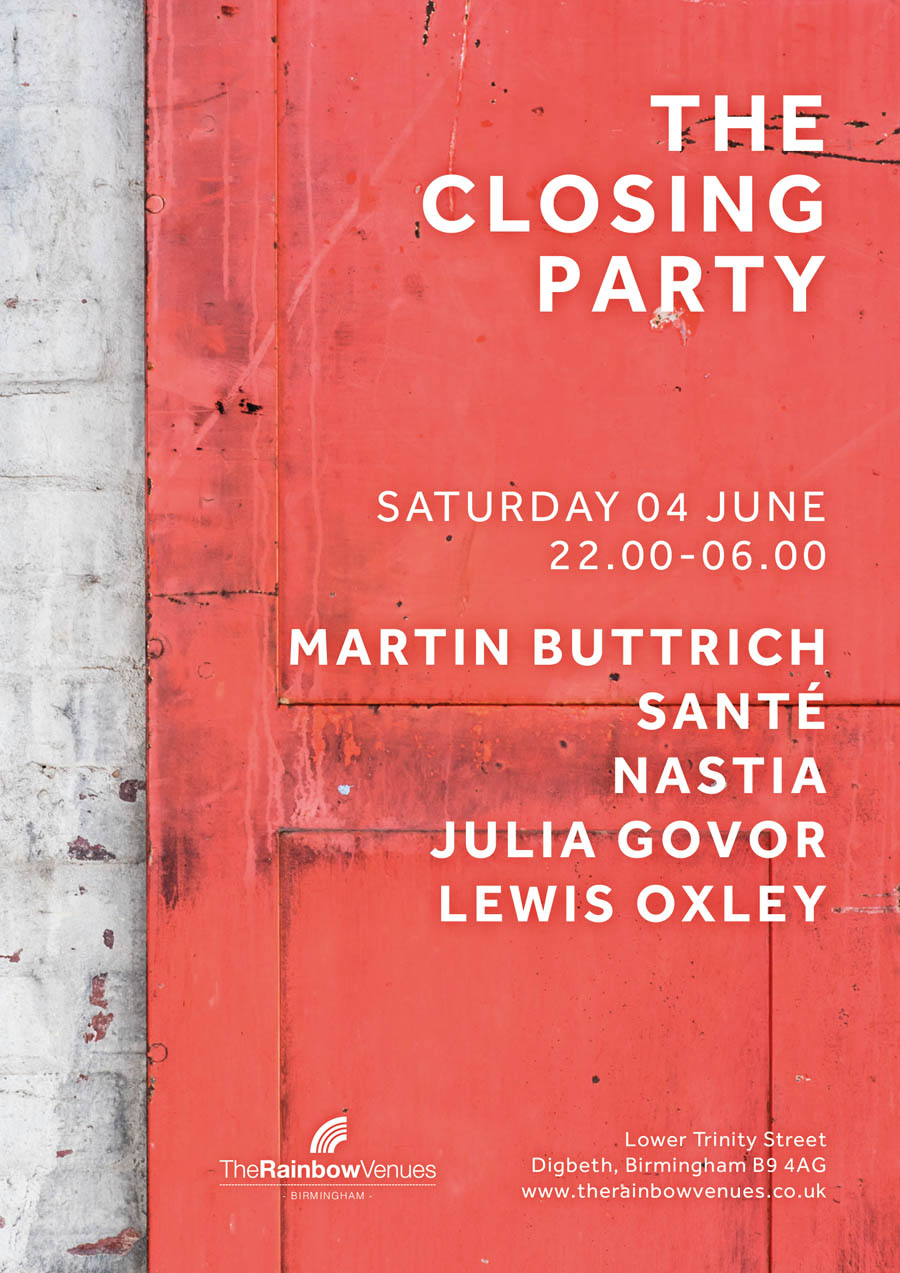 Birmingham venue space The Rainbow Venues brings its Chapter series to a climax and launches its new weekly Saturdays, with the official closing party announced for Saturday, June 4th from 10pm.

Following the success of The Rainbow Venues own in-house festival Chapter XII in March, where over 9000 revellers attended to see the likes of Richie Hawtin, dubfire:live hybrid, Pan-Pot and 40 other international house and techno DJs, The Rainbow Venues concludes the first half of the year with another techno heavy line-up.

The Closing Party marks the introduction of new weekly Saturdays where The Rainbow Venues will host free Saturday events on its Roof Top terrace all through the summer.

Headlining room 1 is techno specialist and co-founder of the Desolat imprint, Martin Buttrich. A musical factotum, Martin Buttrich has over 20 years in the music industry, resulting in a number of impressive releases on labels such as Four:Twenty and Cocoon. Notably, the German DJ received a Grammy nomination for his Tori Amos remix in 2003, and continues to work with some of the biggest names in the electronic music industry.

Two female Birmingham debuts will perform ahead of Buttrich at The Rainbow Venues Closing Party. Self-taught talent Nastia has warmed up for the likes of Richie Hawtin, Ricardo Villalobos and Jamie Jones and is known for her effortless blending of the finest house and techno music. Russian born DJ Julia Govor lent her talent to underground clubs in Moscow for years and honed her distinct techno sound from her inspiration of techno house artists.

Rising star and Blackbox (The Rainbow Venues) resident Lewis Oxley also joins the roster for room 1 and will kick off The Closing Party with his unique and graceful selection of uplifting music. Recognised for starting a party off properly, Birmingham talent Lewis Oxley is a favourite in the city’s underground house scene.

Birmingham underground house brand re:cord host room 2, with DJ, producer and record label owner, Santé at the top of the line-up and re:cord’s own residents supporting the bill. Santé’s music is often the catalyst for driving dance floors into the early hours and his dedication to the industry has secured him with a number of releases with the likes of Desolat, Hot Creations and Cocoon.

For more information and tickets to The Closing Party visit the website www.therainbowvenues.co.uk