Tim Vine ‘Breeeep!’ at The Alexandra Birmingham on 1 June 2023 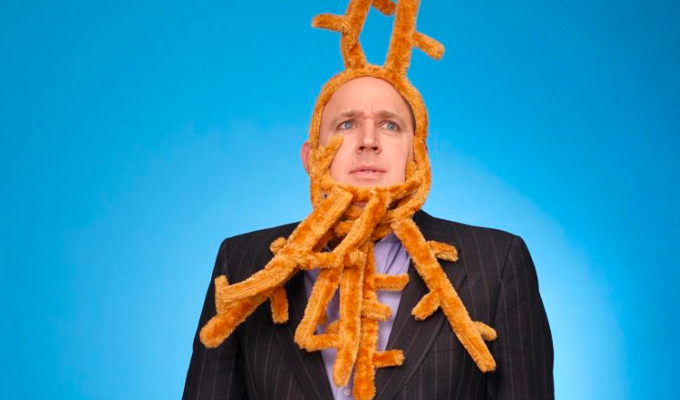 Tim Vine returns with his brand new stand-up show Breeeep!, prompting The Times newspaper to ask: “Is there a more ludicrous comedian in Britain than Tim Vine?” Arriving at The Alexandra Birmingham on 1 June 2023, tickets are on sale today (11 November).

Expect a mountain of nonsense. One-liners, stupid things, crazy songs, and wobbly props (plus utter drivel). Tim’s like the manager of a sweet shop where all the sweets are replaced by jokes, and he serves them in a random order. So it’s like a sweet shop where the manager just throws sweets at you. Enjoy the foolishness and laugh your slip-ons off.

Tim Vine was the winner of Dave’s Best Joke of the Fringe twice. He starred in The Tim Vine Chat Show (BBC Radio 4) and has made numerous TV appearances, including Tim Vine Travels Through Time (BBC One), Taskmaster (Dave), Countdown (Channel 4), Not Going Out (BBC One), The Sketch Show (ITV), Blandings (BBC One), Football Genius (ITV) and Whittle (Channel 5). His vast wealth of material has been preserved in books such as The Biggest Ever Tim Vine Joke Book and The Tim Vine Bumper Book of Silliness.

Tim’s six stand-up DVDs include his most recent ridiculous offering Sunset Milk Idiot. He has also recreated moments from 20 different episodes of Columbo in his online project Recreating Columbo, and has recently finished touring as Plastic Elvis, his Elvis tribute act. But with Breeeep!, Tim’s back to what he does best: telling silly jokes, singing daft songs, and waving mad props akimbo.

Linked In: The Alexandra Birmingham