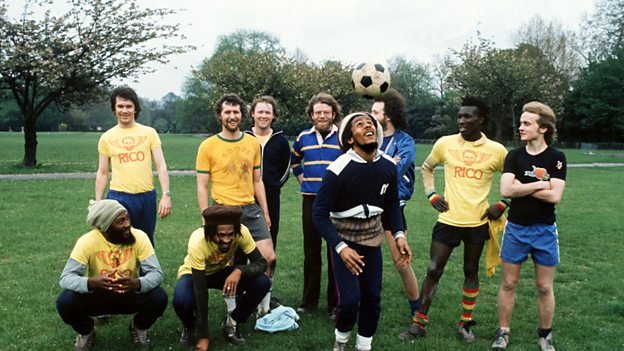 In the 1970s, Bob Marley rose from humble beginnings to become a global superstar. It was a journey that took place not just in his homeland of Jamaica, but also in Britain – the place he came to regard as his second home.

Featuring rarely-seen archive and interviews with people who met him, this documentary examines Marley’s special relationship with Britain and reveals how his presence helped influence British politics, culture and identity, during a time of massive social and civil unrest in the UK – and how his universal message of One Love and unity helped inspire a generation of Black British youth.

This documentary also takes a revealing look at how Marley spent his time while he was in Britain: the houses he lived in, football kickabouts in Battersea Park and visits to the UK’s growing Rastafarian community, including secret gigs in the North of England.

The film features interviews with people who met and worked with Bob Marley in the UK – and whose lives were changed by meeting him – including photographer Dennis Morris, who accompanied Marley on tour; founding member of the reggae band Aswad, Brinsley Forde; The Cimarons’ Locksley Gishie; and filmmaker and BBC Radio 6 Music presenter Don Letts. Also interviewed is reggae legend Marcia Griffiths of Bob Marley’s vocal group The I-Threes.

There are also memories of the most important gigs he played in Britain, as told by those who were there to see it happen, including early Wailers gigs in small pubs and clubs when the band were still largely unknown, a now-legendary acoustic performance in the gym of a Peckham High School and a triumphant show at London Lyceum Theatre that helped propel Marley to global fame.

When Bob Marley Came to Britain is a Wise Owl Films production. The producers are Karen Gabay and Stuart Ramsay. It is directed by Stuart Ramsay. The Executive Producer is Mark Robinson. It is commissioned by Owen Courtney, Commissioning Executive, BBC Music.

When Bob Marley Came To Britain