Home » Around The Web » Will Vaping Be Allowed in Cafes and Bars?

Will Vaping Be Allowed in Cafes and Bars? 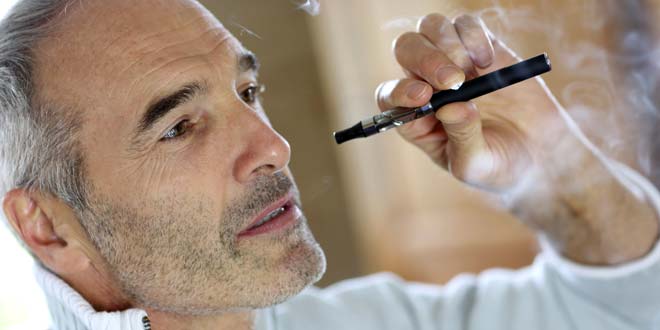 A group of MEPs have issued recommendations to the government that vaping be permitted in public places, so that people who smoke deadly cigarettes can more easily get off tobacco for good — and among them are proposals to allow e-cigarette use on buses and trains. This may also see a move towards public acceptance of vaping in cafes and night spots, such as bars and clubs.

It wasn’t all that long ago when you could light up your cigarette anywhere you chose — in pubs, cinemas and even on planes — and no one would care. But that was before we learned about the deadly effects of smoking and the hazards of secondhand smoke. These days, it’s not only illegal to smoke in public places and on transport, but it’s also widely socially unacceptable.

After all, smoking is the leading cause of premature death here in the UK and right around the world. In Britain, around 100,000 people die from smoking every year, including those who inhaled secondhand smoke. Globally, the tobacco death toll is a shocking seven million a year — nearly one million of whom die from diseases caused by secondhand smoke. Now that we know — as Public Health England said earlier this year — that vaping is 95% less harmful than smoking, many health authorities are starting to support e-cigarettes to try to get people to quit tobacco for good.

Parliament’s Science and Technology Committee wants a raft of issues concerning vaping to be considered by the government and health authorities, as it believes e-cigarettes or vape juice, which are easily available from a good vape shop, are far better than smoking and can help to save lives.

“Smoking remains a national health crisis and the Government should be considering innovative ways of reducing the smoking rate,” said the committee chairman, Norman Lamb. “E-cigarettes are less harmful than conventional cigarettes, but current policy and regulations do not sufficiently reflect this and businesses, transport providers and public places should stop viewing conventional and e-cigarettes as one and the same. There is no public health rationale for doing so.”

He also said that concerns that e-cigarettes — such as the popular Juul e-cig — would be a gateway to smoking for people who have never smoked before were unfounded and had “not materialised.” E-cigarettes could, in fact, he said, “be a key weapon in the NHS’s stop-smoking arsenal.”

What the committee’s members are aiming to achieve is a normalisation of vaping, and a better understanding of what it is and what the health benefits are compared to smoking. This, the committee believes, would go a long way towards getting more people off tobacco and keeping them off it.

“E-cigarettes are a proven stop smoking tool and, while uncertainties undoubtedly remain about their long-term health impact, failing to explore the use of e-cigarettes could lead to the continued use of conventional cigarettes,” said Lamb. “Medically licensed e-cigarettes would make it easier for doctors to discuss and recommend them as a stop smoking tool to aid those quitting smoking. The approval systems for prescribing these products must be urgently reviewed.”

Already, the NHS urges smokers to switch to vaping, as part of its annual Stoptober campaign. “E-cigarette vapour doesn’t contain tar or carbon monoxide, two of the most harmful elements in tobacco smoke. Using an e-cigarette isn’t completely risk-free, but it carries a small fraction of the risk of smoking and can help you quit,” it advises. “E-cigarettes are particularly effective when combined with support from local stop-smoking services — people who choose this route have some of the highest quitting success rates.”

You can no longer light up when you go out for the night, but soon you may be able to vape away to your heart’s content.