Young Theatre Makers From Across Europe Unite On Stage in Birmingham 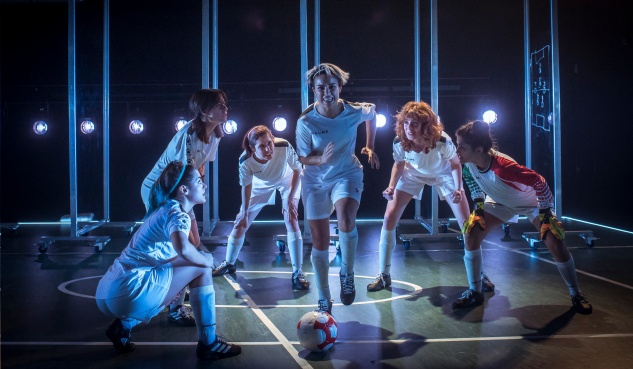 The aim of the festival is to raise awareness of the brilliant youth theatre work, both in the UK and Europe, and also to celebrate incredible theatre made by young people aged 14 – 25. The youthful festival programme includes a broad range of plays from the classic, Antigone to the topical Windrush inspired, The Place For Me.

Steve Ball, Associate Director for Learning and Participation at Birmingham Repertory Theatre says of the festival;

For / With / By is a celebration of the thousands of young people who take part in youth theatre groups every week across the UK and Europe. Here at The REP we believe that theatre, and the chance to participate in high-quality drama activities should be open to every young person. Performing, learning and participating in theatre can have life-changing experiences and I think that during the festival you’ll not only see some incredible theatre making, you’ll also see young people having a real drive and passion for something they have chosen to be part of.

Madrid’s La Joven Compania visit with Playoff, a show about an all-female football team. Also visiting the UK is Story Lab by ASSITEJ Poland – a play inspired by interviews with Polish people about the 60s sexual revolution compared with present day teenagers’ sexuality.

Kildare Youth Theatre, Ireland asks if you can forget the past in The Act of Oblivion and Birmingham’s Lightpost Theatre explores the impact of the Windrush – the ship that carried the first Caribbean migrants to the UK in 1948 and the start of modern British multiculturalism.

Coventry’s Belgrade Youth Theatre will perform Rise – a new play inspired by vibrant women and the challenges they face almost 100 years since they got the vote.

Northern Stage Young Company present Where Do We Stand, a spectacle illuminating untold stories and unheard voices on what it is to live, work and dream in Newcastle in 2018. The Young Vic Taking Part company puts young people’s voice at the centre of all that they do and in The Jumper Factory, a cast of young men aged 18 – 25 collaborated with 8 inmates at HMP Wandsworth to create a new piece of theatre that explores the universal themes of siblings and family.

Liverpool’s Young Everyman Playhouse present Until They Kick Us Out – a show that takes a bold and original look at political issues today including Brexit and Trump while encouraging audiences to make a change.

People You May Know is the New Wolsey Theatre’s talent development company for young theatre makers. In their play, St*pid F*cking K*ds, they set out to ask a few questions about what it is that irritates society so much about adolescents.

Lastly, Becoming, written and created by Extraordinary Bodies Young Artists from The Lighthouse in Poole, is about being somewhere between 16 and 25 years old and not yet qualified to be a grown up but not allowed to act like a child either.

In addition to the programme of performances, a day-long symposium for Youth Theatre practitioners will take place on 1 August at The REP organised by the Royal Birmingham Conservatoire.

For / With / By: Festival Of European Youth Theatre is generously supported by Ramps on the Moon, Baron Davenport’s Charity and The Golsoncott Foundation.

For / With / By: Festival Of European Youth Theatre takes place from 30 July – 3 August. Tickets and info available from birmingham-rep.co.uk