A Guide to the Best Thai Restaurants in Birmingham 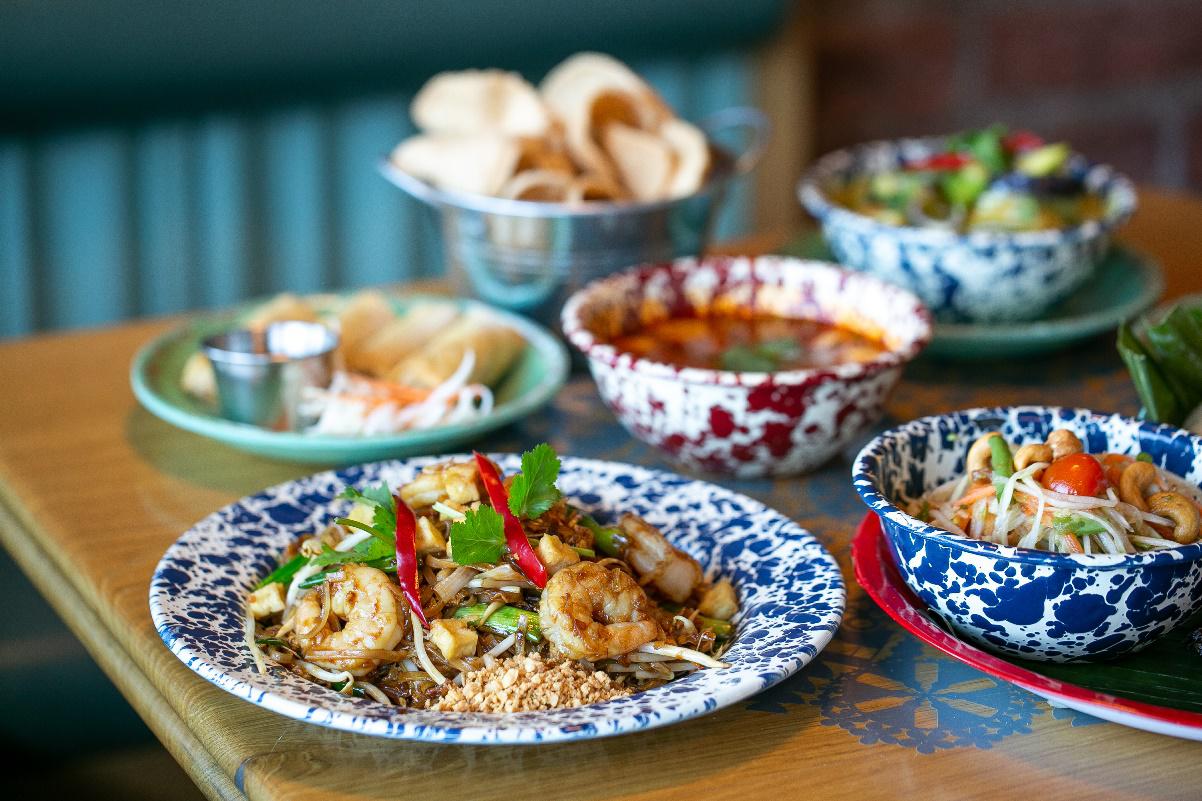 The hugely varied restaurant scene in Birmingham means that we can now find dishes from just about any part of the planet in this city, with Thai food increasingly popular. What are some of the best Thai restaurants in Birmingham worth exploring right now?

Both dining-in and takeaway options are available in this two-floor restaurant that has a modern look and an open kitchen. Chaophraya was founded in 2004 by Khun Kim and her British partner, Martin. Kim was born in Khiri Mat, in rural Thailand, and worked in the food business in Bangkok selling her Pad Thai dishes from street carts.  The couple met in 1997 and moved to the UK soon afterward. Their Birmingham venue is located in St Martins Square at the Bullring, while they also have locations dotted across the UK, such as in Edinburgh, Leeds, and Newcastle. Their menu is divided into sections such as celebratory, a la carte, lunch, and vegan, while they also offer Thai cooking classes.

The history of Sabai Sabai can be traced back to 2003 when the husband and wife partnership of Torquil and Juree Chidwick opened their first Thai restaurant in 2003. They then grew in the Midlands, gaining a reputation for creating atmospheric locations with a modern, sophisticated feel to them. Their current locations include a central Birmingham venue on Waterloo Street, Harborne, Moseley, and Stratford-Upon-Avon. The a la carte menu for their central Birmingham restaurant has interesting options such as Thai Calamari, Crispy Duck Salad, and Thai Chicken Wings, while there are three set menus and a separate dessert menu too.

This restaurant located on Holloway Head takes a different approach, by adding evening entertainment in the karaoke bar to their Thai cuisine. Hand-carved Thai decorations give the venue an authentic atmosphere, and they offer private rooms for up to 30 guests, as well as a dining area open for public bookings. A look at their menu brings up starters such as a mixed or vegetarian platter. The soups include Fish Soup with Crab Meat and Tom Yum King Prawn Soup. Main courses include classics like Thai Green Chicken Curry, Stir-Fried Beef with Oyster Sauce, and Water Spinach in Garlic Sauce.

Rose’s Thai Café is another location that we’ve looked at in the past and found a relaxed atmosphere along with great food like Honey-Marinated Pork Skewers and Papaya Salad. What if you enjoy eating these dishes and decide to head to Thailand to immerse yourself fully in their cuisine and the famously friendly culture there?

Living and Eating in Thailand: The Internet Makes It Easier to Settle

Many of the UK’s best Thai restaurants have been opened by people who grew up in Thailand and moved here, often with a British partner who works with them. Yet, the appeal of Thai food and culture has also led to an increasing number of Brits moving there to live. By the end of 2021, it was estimated that some 55,000 British citizens live in this country. Many of them live in the capital, Bangkok, while others look for locations close to the beach. The outdoor lifestyle is one of the key changes that ex-pats here enjoy, with the huge variety of street food making eating out a pleasure. However, it’s the ability to work online that helps many Brits to live here, with the Thai Embassy confirming that digital nomads are welcome provided that they obtain the correct visa, get a work permit and pay taxes.

Brits can also carry on with their favourite hobbies, as they can read British newspapers, watch football and even play Wordle online. British gambling fans can also still play casino games thanks to the best online casinos for players in Thailand, such as Happy Luke and Lucky Days, being easily available. These are international sites that accept a wide variety of the most reliable online payment options such as e-wallets and e-banking. They offer games that most Brits will be familiar with including a selection of slots, blackjack, and roulette options. All you need is an internet connection. Many people obtain an internet connection in Thailand by using Wi-Fi in a hotel or café, while you can also buy a SIM card under a pre-paid contract. The site will tell you all you need to know about the legality of gambling in Thailand, as well as how to get started and a full assessment of each suggested site.

In terms of food, those ex-pats who enjoyed Thai cuisine in the UK will have plenty to choose from once living in the Asian country. What about those who miss British food, though? Traditional items like tinned beans, gravy, and bread can be ordered online for worldwide delivery from sites such as the British Corner Shop and BritiShop. Meanwhile, Bangkok contains venues such as the British Café Thailand and the Old English Pub. Thai cuisine should continue to be popular in Birmingham as the number of local options continues to grow. However, anyone who gets a taste for this food will also find that it’s easier than ever before to head to Asia and eat their favourite dishes while experiencing a new culture.