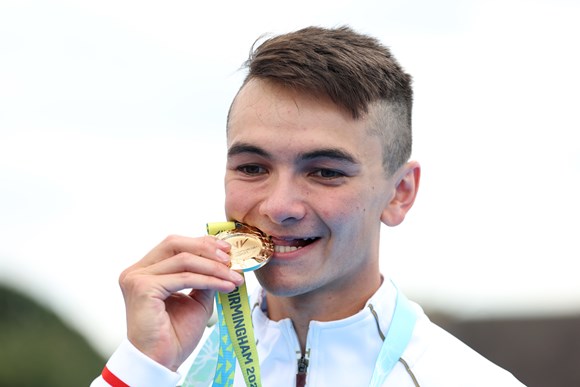 Alex Yee finished the Men’s Individual (Sprint Distance) Triathlon in 50:34, thirteen seconds ahead of New Zealand’s Hayden Wilde, who led for much of the race, and Australia’s Matt Hauser (50:50) who claimed Bronze.

Silver medallist Wilde led from the off with a strong swim, building up a 20 second buffer back to eventual winner Yee at the start of the run.

Yee, who is renowned as one of the best runners in triathlon, powered his way back to Wilde over the undulating Sutton Park course. A sprint finish wasn’t necessary as Wilde was forced to take a 10-second penalty before the finish for not putting his cycling helmet away properly in the transition.

The medals were presented by Dame Louise Martin DBE, President of the Commonwealth Games Federation and Dr Debbie Alexander First Vice President World Triathlon, at the first of the ceremonies rewarding athletes across 19 different sports, eight of which have integrated para sport events.

The Birmingham 2022 medals are manufactured by Toye, Kenning and Spencer, jewellery manufacturers based in the city’s world-renowned Jewellery Quarter and the medals were designed by three female students from the School of Jewellery.

The medal and ribbon have been designed with all athletes competing in the 19 sports and eight Para sports in mind.

The medal has been created so that is it textured and has a tactile quality, so all athletes, and especially those with a visual impairment, can feel the design. The ribbon attached to the medal is also adjustable, so that it sits comfortably when worn, no matter the height of the athlete or Para athlete wearing it.